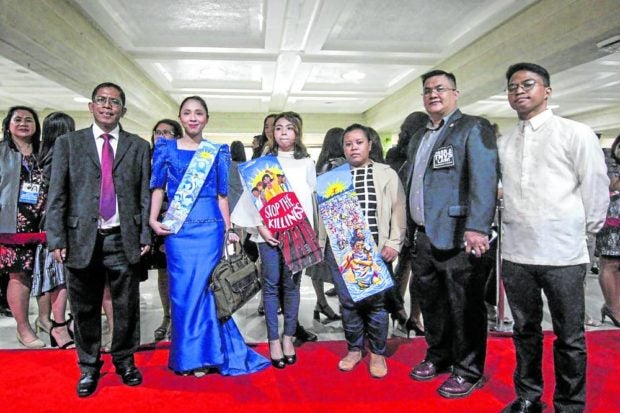 WORN ADVOCACY | An example of protest art worn to the SONA in 2019. In blue Filipiniana dress is then Kabataan Rep. Sarah Elago with two similarly expressive supporters. —EARVIN PERIAS

MANILA, Philippines — On Monday, for the first time since the start of the pandemic, more guests and media personnel will be allowed at the venue of the State of the Nation Address (Sona) of President Ferdinand Marcos Jr.

But a number of lawmakers, particularly from the Makabayan bloc in the House, are finding the security arrangements for the president’s first SONA to be too restrictive, as they include not only a COVID-19 test requirement but also a dress code prohibiting any attire that will convey political messages, something that protocol officers didn’t mind in the past.

On Tuesday, House Secretary General Mark Llandro Mendoza issued a memo saying guests attending the Sona, whether in-person or via Zoom, should be in business attire, barong or Filipiniana dress.

“Wearing of clothes with political messages shall not be allowed,” Mendoza added.

In a message to the Inquirer on Saturday, ACT Teachers Rep. France Castro of the Makabayan bloc said she had written Mendoza urging him to withdraw that restriction.

Quoting her letter, she said there was no provision in the past rules governing joint sessions of the House and Senate that had been “violated by the wearing of clothes with political messages.”

“Neither do we see any violation of parliamentary practice, protocol and social norms in the wearing of political statements,” Castro added.

“To reiterate, no such rule has ever been imposed in either [chamber] in recent history, given its intrusion into the personal freedom of dress … and, more importantly, the violation of the civil and political rights of the people on whose behalf the House member sits [in] the joint session,” the lawmaker said, citing constitutional provisions on freedom of expression.

Castro said lawmakers in the past had “worn their advocacies to the Sona” and even during regular sessions.

“[They] have freely worn indigenous clothing, even held hijab-wearing days and ribbon campaigns, as part of expressing through attire what they [advocate] in their bills and resolutions,” she said.

In previous Sonas by Marcos’ predecessor, Rodrigo Duterte, Makabayan lawmakers wore variations of the barong and Filipiniana gowns with messages conveying their stand on a wide range of issues—from the militarization campaign affecting the indigenous peoples to China’s incursion into Philippine waters.

On Twitter, Kabataan Rep. Raoul Danniel Manuel said it was the “first time … that an explicit prohibition [was] issued” regarding what Sona guests should wear.

“Protests are not allowed, now even messages on clothing is also banned? Are they afraid of art? Is this martial law?” he said. —WITH A REPORT FROM INQUIRER RESEARCH