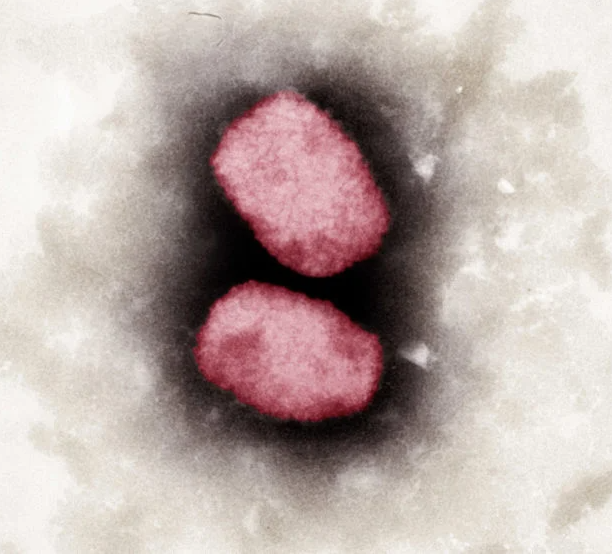 This handout photo taken in the year 2001 and received on May 23, 2022 from the Robert Koch Institute (RKI), the German federal government agency and research institute responsible for disease control and prevention, shows a colored electron-microscopic capture of the monkeypox virus. – As of May 21, 2022 the World Health Organization received reports of 92 laboratory-confirmed monkeypox cases and 28 suspected cases from 12 countries where the disease is not endemic, including several European nations, the United States, Australia and Canada. | Photo by Andrea MAENNEL and Andrea SCHNARTENDORFF / RKI Robert Koch Institute / AFP

CEBU CITY, Philippines – In order to prevent panic and misinformation, the Cebu City Government is planning to conduct an education drive about monkeypox down to the grassroots level.

City Health Officer, Dr. Jeffrey Ibones, said their department, together with the Emergency Operations Center (EOC), will be having a meeting with barangay officials on the planned information drive.

Ibones said that while there are no confirmed cases of monkeypox in Cebu City, there is no need “to cause unnecessary panic.”

He also said that the education campaign would help residents protect themselves from the infection, as well as determine the actions that they will have to take once they or their relatives get infected.

Monkeypox, like chickenpox and small pox, is a viral infection.

According to Ibones, monkeypox differs from the two known diseases based on the symptoms an infected patient exhibits.

The City Health officer also urged the public to seek professional help if they start to experience symptoms of the infection.

Officials from the Department of Health in Central Visayas (DOH-7) have also reminded everyone to continue observe health protocols such as wearing face masks, social distancing, and regular handwashing as these measures are designed to prevent viral infection, such as monkeypox.

Read Next
Rama to Anti-Mendicancy Board: Clear sidewalks of vagrants, mendicants