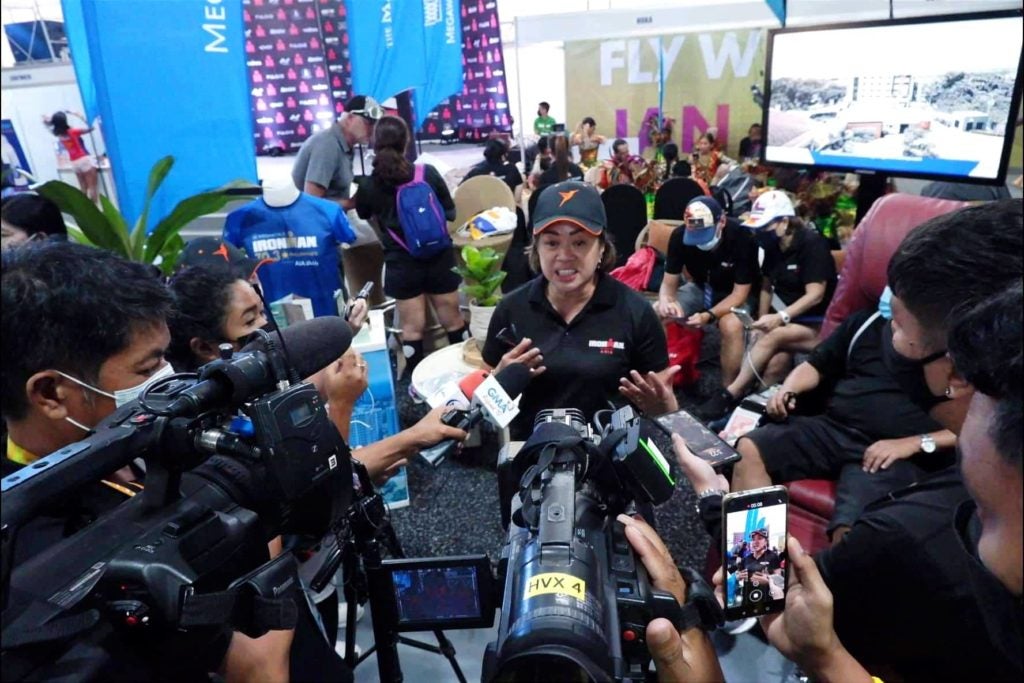 A total of 1,928 triathletes from 46 countries answered the starting gun in the race that featured 1.9-kilometer swim, 90k bike, and 21k run marking the end of over three-year hiatus due to the COVID-19 pandemic.

One of the most happiest persons during the race on Sunday was the organizer, Princess Galura of the Sunrise Events Inc. (SEI).

According to Galura, they were blessed with a wonderful weather which contributed to the perfect race condition despite the weather forecast’s 70 percent chance of rainfall last Sunday.

In addition, most of the triathletes were impressed by the new bike route that traversed one of the Philippines’ longest bridges, the Cebu Cordova Link Expressway (CCLEX) and the newly constructed Gabi-Pilipog Road in Cordova Town.

“We were blessed with great weather, we had perfect race conditions. Very clear (during) the swim, really good bike ride, it was an overcast. It eventually rained but everyone’s already doing the run. All of them are safe. The Lord blessed us with a very good weather,” said Galura.

“I really said from the very beginning that just coming to Cebu and make this race was already a success. I can say thank you Cebu for welcoming us, we are back as the Crown Jewel of Asia in triathlon,” she said.

Galura also revealed that many triathletes have already told her wishing that they would come back for next year and would still traverse CCLEX.

Cebu, being the “Crown Jewel of Asia” in triathlon, was badly hit with the COVID-19 pandemic and the super Typhoon Odette.

Galura said that they had to overcome numerous challenges to make the race happen.

“Going into the race, it was very difficult because Cebu like any other province or city was affected by COVID-19, and it hit the economy hard and the government,” Galura explained.

“Maraming salamat ni Mayor Ahong (Junard Chang) na kailangan din magjumpstart ang Mactan (Thanks to Mayor Ahong because Mactan needs to jumpstart), because Lapu-Lapu’s tourism industry needs to jumpstart.We know that tourism has the best immediate effects on everyone, whether it’s the parking boy, the caterer, the chef, the waiter, it will trickle down becomes a multiplier that affects the economy positively,” she said.

The race last Sunday showcased all sorts of changes from the swim start, the bike route, and the race venue at the Mactan Newtown.

For eight years, the Shangri-La’s Mactan Resort and Spa became the official venue of the race until this year after SEI and Megaworld Cebu forged a partnership to utilize the latter’s upscale township, the Mactan Newtown.

“Mactan Newtown is my new best friend, they had been holding hands with us from the very beginning. If not for them, we wouldn’t have any swim. The Mactan Newtown had the perfect location of the transition which can accommodate up to 2,000 bicycles,” said Galura.

“The race’s expo was built for two-weeks with most of the materials came from Mindanao. It was brought here with six big trucks. So, sinong magtitiwala sa atin ng ganun kalaki (So who would believe us that this was that big)? Aside from giving us rooms in Savoy, so it was a big investment and I know they also got ROI in their partnership with Ironman,” he said.

Racing amid the pandemic

In addition, Galura ensured that they had followed all health and safety protocols while doing the race.

Although crowded places and people not wearing face masks were seen at the race venue, Galura explained that everyone coming from other countries were required to submit their vaccination cards.

Meanwhile, those who weren’t vaccinated needed to submit their RT-PCR tests prior to arriving to Cebu.

Mayor Chan also announced that they were not prohibiting unvaccinated people to attend the event prior to the race.

“Lahat ng protocols ginawa namin, we made sure to check everyone’s health before coming to Cebu by providing us their vaccination cards. Mayor Ahong gladly told us that even non-vaccinated individuals can attend the race as long as they can present a negative RT-PCR test 48 hours before arrival to Cebu,” said Galura.

(We did all the protocols, we made sure to check everyone’s health before coming to Cebu by providing us their vaccination cards. Mayor Ahong gladly told us that even non-vaccinated individuals can attend the race as long as they can present a negative RT-PCR test 48 hours before arrival to Cebu.)

Galura also explained and apologized for all the media covering the race which were barred by the security and marshals on the venue.

According to Galura, they weren’t able to brief the security and marshals at the Mactan Newtown to give the media covering the event special attention and all access.

“Nagpapaumanhin kami sa lahat ng naapektuhan, ang nangyari kasi is that the area in the swim start is very small. There were no spectators at the swim start,” Galura said.

“We failed to brief the security of Mactan Newtown na yung media bigyan ng special attention. It’s the first time na nangyari ito sa amin, so hindi na ito mauulit. We’re very thankful to call our attention and we liked for everyone to call our attention on our errors to prevent it from happening,” she said

Lastly, Galura revealed that the organizing team and all stakeholders of the event were having a race debriefing to look into possible improvements for future races.