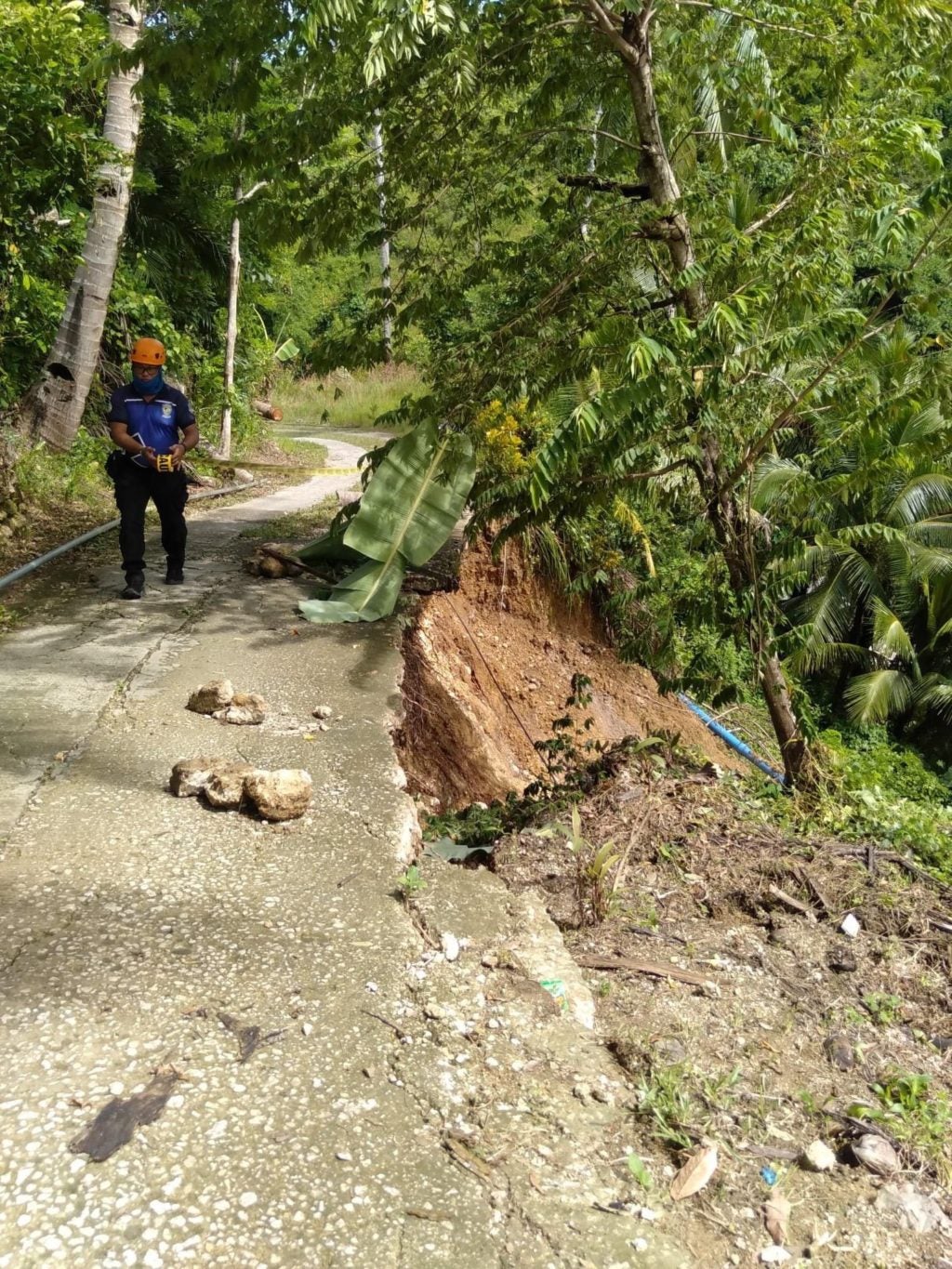 A landslide occurred in this portion of Lower Kawasan in Barangay Montpeller, Alegria town in southwestern Cebu on Tuesday morning, August 9, 2022. The ground became saturated, and eventually eroded, due to incessant rains in the past days. | Photos from Alegria MDRRMO

CEBU CITY, Philippines – Non-stop rains in Cebu may have stopped but local authorities here urged the public to remain vigilant of their surroundings and monitor their weather situation.

In turn, the Provincial Disaster Risk Reduction and Management Office (PDRRMO) advised residents to practice caution and report any eventualities immediately to nearby authorities.

He also directed local disaster and rescue units to be on alert, and continually monitor their localities.

Local disaster and rescue units from affected towns and cities in Cebu province attributed the recent landslides and damages to vital infrastructures, such as roads, in their areas to the heavy rains that occurred between August 3 and August 7.

The latest landslides were reported in Talisay City, and the towns of Alegria, San Fernando, and Boljoon, all in southern Cebu.

The Municipal Disaster Risk Reduction and Management Office (MDRRMO) of Alegria confirmed that a landslide small portions of a barangay road in Lower Kawasan, Brgy. Montpeller, a hinterland village at around 10:05 a.m. on Tuesday, August 9.

The ground on the landslide site had become saturated after days of downpour, and eventually eroded, Alegria’s MDRRMO stated.

Earlier that day, the local governments of Talisay City, San Fernando, and Boljoon also reported landslides in their respective jurisdictions.

In Barili, which is also in southern Cebu, only one lane of the Malolos Road in the town’s Brgy. Malolos was passable to traffic after portions of it collapsed.

The ground beneath the barangay road eroded past 12 midnight on Tuesday.

The combined effect of the prevailing southwest monsoon (habagat) and a low-pressure area (LPA) brought incessant, heavy rains in Cebu between August 3 and August 7.

As a result, Cebu received an ‘excessive amount of rainfall’ during the first week of August, at 212 millimeters, which is already way beyond its monthly average of 157 millimeters.

Most parts of Metro Cebu were inundated, including the tri-cities of Cebu, Lapu-Lapu, and Mandaue.

Based on an initial tally compiled by local reporters, a total of 392 families from the towns of Barili, Minglanilla, Compostela, Carmen, Dumanjug, and the cities of Mandaue and Toledo were affected by the recent floods.

PDRRMO, in the meantime, said they are still coming up with the official figures on the damages incurred in infrastructure and agriculture.

Cebu to experience intermittent rains over the weekend