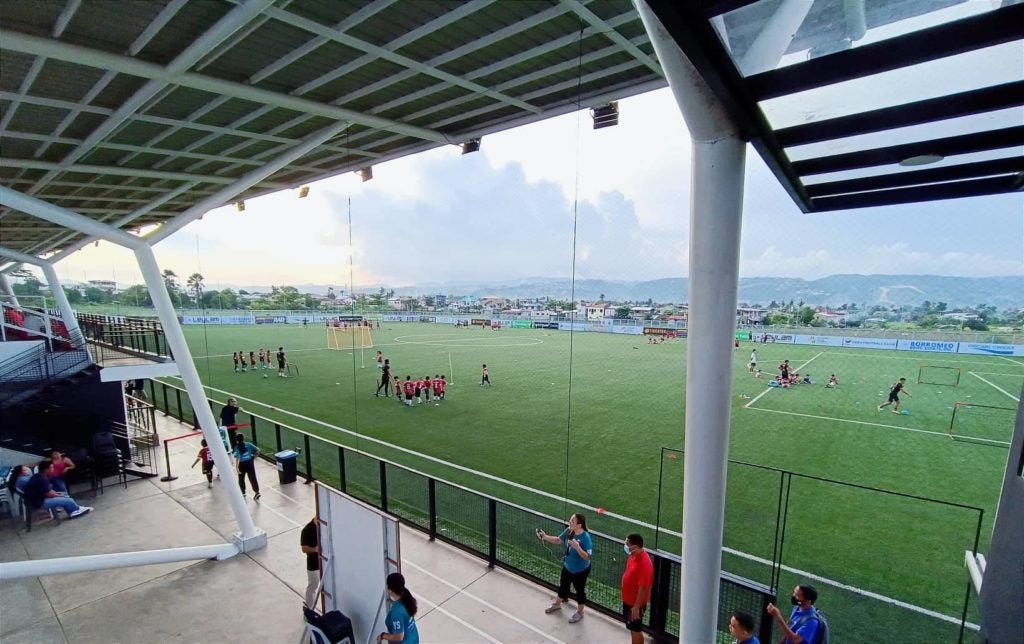 This is the venue of the 7’s Football League Cebu, the Dynamic Herb-Borromeo Sports Complex in SRP, Cebu City. | Photo by Glendale Rosal

The tournament, which is targeted to last for eight weeks, is eyed to be an addition to Cebu’s existing football leagues such as the Aboitiz Football Cup and Thirsty Football Cup to name a few.

According to the Event Coordinator Candice Grey-Del Rosario of Manila-based Futbol Fanatics, one of their main goals for establishing this one-of-a-kind league is to provide players and clubs an added regular tournament in their annual football schedule.

The tournament was originally founded by former Azkals star Anton del Rosario and is currently holding the same tournament at the Bonifacio Global City in Manila.

Also, it has running tournaments in Clark Pampanga, Bacolod, Iloilo, and Batangas.

“It’s one opportunity that we can provide more opportunities also to have consistent leagues in Cebu. It’s to give also the opportunity to add on the existing leagues and festivals that have already put up here in Cebu,” said Grey-Del Rosario.

In addition, the tournament wants to make Cebu part of 7’s League’s national and international plans. At the same time, it aims to provide long-term development for youth players with its platform in football.

Unlike the existing tournaments here in Cebu, this one features a one-of-a-kind format, a 7-aside quick-paced competition which has a 25-minute playing time.

In addition, it features a unique rule wherein each team will acquire a penalty on their fifth foul, while players who received a card are required to have a 2-minute time-off of the field.

“Our special rules encourage the players to play clean games and lessen injuries. When you get a card, you have to spend a 2-minute time off the field. It allows the opposing team to get a power play. It also helps control the game in a clean and competitive way,” explained Grey-Del Rosario.

Moreover, the competing teams in the men’s division have something big to look forward to as the champion team will represent Cebu for the AIA Kampeon’s Cup.

Kampeon’s Cup is basically the national championships of the tournament where teams from Manila and other AIA 7’s League champions from around the country will compete for supremacy.

“There will also be a AIA Kampeon’s Cup, the 7s league Manila has a kampeon’s cup in October, with each city to represent them. As organizers of Cebu, we would be making the selection for the men’s Kampeon’s Cup in Bacolod so, we will have a team from Cebu and other cities that are participating in the league,” added Grey-Del Rosario.

The organizers promised Cebuano football fans a fun and competitive league, which offers the same festive atmosphere like the ones they used to have in Cebu.

The The MVP Sports Foundation and the Cebu Safari & Adventure Park backed tournament, which is sanctioned by the Central Visayas Football Association (CVFA).

Read Next
Iza Calzado asked self upon learning she’s pregnant at 40: ‘Is this what I want?’