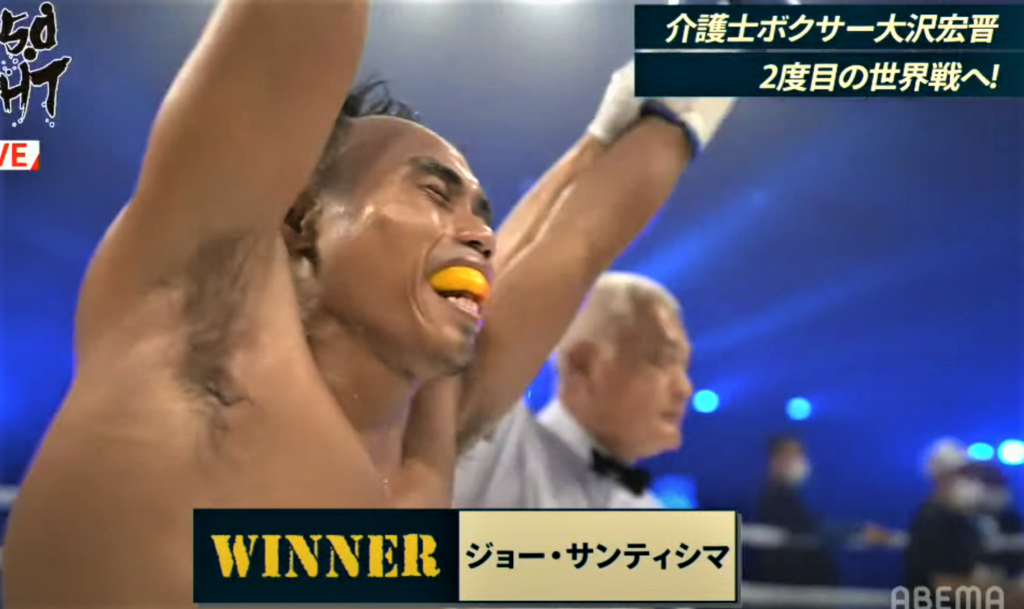 Jeo Santisima celebrates after knocking out Hiroshige Osawa of Japan. | Screen grab from the livestream.

The 26-year old Santisima of Aroroy, Masbate bounced back impressively from his March 4, 2022 defeat in the hands of American Joet Gonzales for the World Boxing Organization (WBO) International featherweight title.

Santisima who fights for ZIP Sanman Boxing Team virtually ended the long drought for Filipino boxers who campaigned in Japan.

Making his victory even more impressive was that he knocked down Osawa twice throughout the bout. He downed Osawa in the third round and finished off the latter in the fifth round with a minute remaining.

Santisima who fought for the WBO world super bantamweight title in 2019, improved his record to 22 wins with 19 knockouts and four losses.

In the first round, Osawa established excellent jabs that kept the Filipino boxer from getting close to him.

However, in the second round, Santisima started to close the gap and managed to land numerous power punches, including powerful uppercuts that rocked the Japanese veteran. Despite Santisima’s aggressiveness, Osawa paced himself with jabs.

In the third round, Santisima scored his first knockdown with a combination to the body followed by a left hook to the head. Osawa managed to get back on his feet and survived the round.

The Filipino boxer continued his aggressiveness in the fourth round, which even resulted to a warning from the referee after hitting Osawa too low with his uppercut.

In the fifth round, Santisima pounded Osawa with combinations while the latter tried to stop the Filipino boxer with jabs.

However, Osawa got tagged with a counter left hook while trying to hit Santisima with jabs. He got knocked down and didn’t even bother to get back up, prompting the referee to stop the bout and award Santisima with the KO victory.