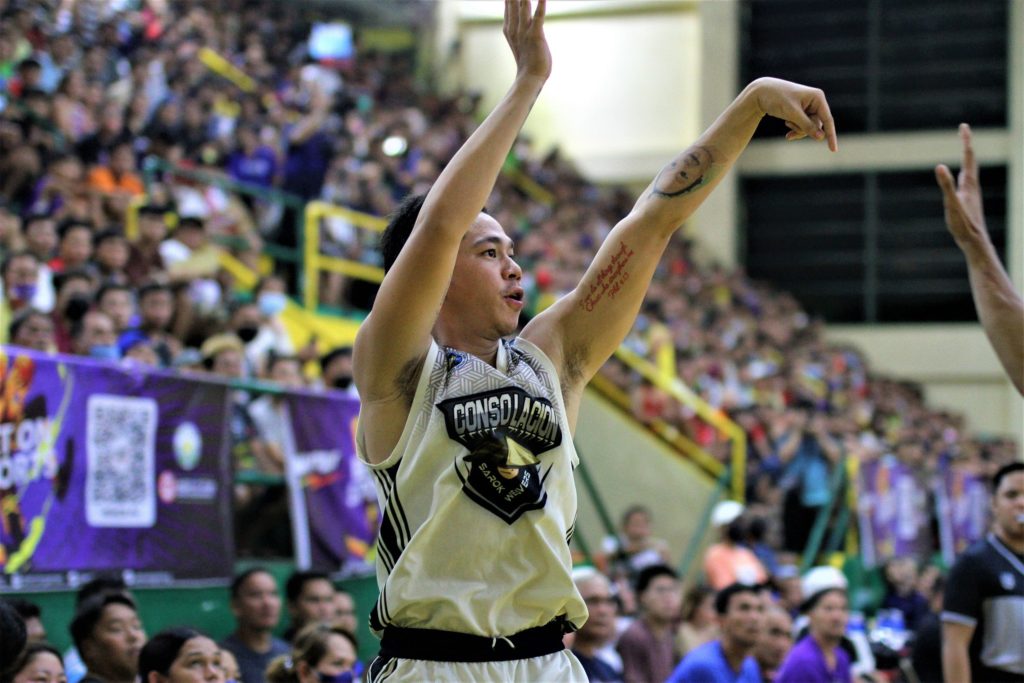 Consolacion’s Keaton Clyde Taburnal throws a jump shot during the Sarok Weavers-Davao Occidental Dreamers game in the PSL 21-U Battle of Champions. | Photo from PSL

CEBU CITY, Philippines — The Consolacion Sarok Weavers are just a win away from the Pilipinas Super League (PSL) 21-U national crown.

This is after the Sarok Weavers rallied for a scrambling, 79-76 win over the Davao Occidental Dreamers Friday night, in the opening game of the “Battle of Champions,” at the Cebu City Sports Institute.

With the win, Consolacion, the reigning Visayas leg champions only need one more victory to claim the PSL 21-U national crown.

All the Sarok Weavers need to do, is to weave some more hardcourt magic against the Luzon leg champions, Pampanga Delta tonight, Sept. 3, 2022, at 8:00 PM.

Consolacion had a sluggish start against Davao and fell behind by as much as a dozen, 20-32, in the first period and trailed most of the game.

The heart-stopping fourth period saw both teams going at each other’s scalps which resulted in multiple deadlocks.

It was at the fateful 5:41 mark of the final period when Keaton Clyde Taburnal gave Consolacion its first taste of the lead, 70-69, after sinking both his free throws.

Not to be outfought, Davao Occidental engaged Consolacion in another thrilling seesaw battle in the ensuing minutes, with the Cebuano squad just ahead by a point.

With 22 seconds left, Froiland Maglasang missed his three-point attempt that could’ve given Consolacion a two-possession lead.

Davao Occidental quickly grabbed the defensive rebound from the missed three-pointer and Jude Bagay heaved a prayer-packed jumper that could’ve given the Dreamers the lead.

However, Maglasang was quick to redeem himself by denying Bagay’s jump shot with a monster block.

Kin Dayday then secured the rebound and passed the ball to Taburnal who converted an easy layup for a 79-76, Consolacion lead with four seconds remaining.

Davao which had the final ball possession foiled its back-to-back three-point attempts from Rainer Maga and Bagay as the Sarom Weavers erupted in celebration.

Maglasang stuffed the stat sheet with 13 points, seven rebounds, three assists, three steals, and one block while Rovello Robles also had 13 markers to go with six boards and an assist.

Maga and Bagay had 19 and 15 points, respectively, while Limuel Tampus scored 10 for Davao Occidental.     /rcg

Read Next
Over 18,000 individuals receive free TDC from LTO-7