After championship revelry, Fajardo rushes home to be with late mother 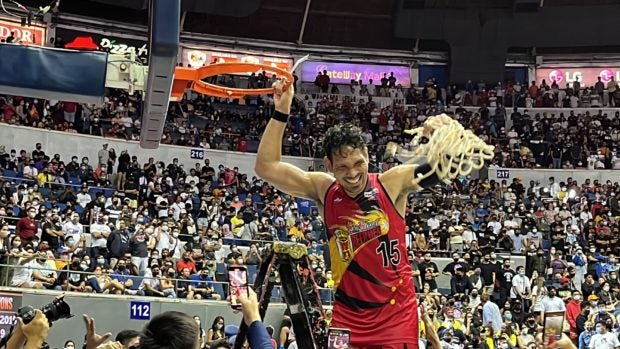 June Mar Fajardo is back on top, and so are the Beermen. —DENISON REY A. DALUPANG

Staring blankly at the tiled floor of the Big Dome dugout late Sunday night, after the revelry over San Miguel Beer’s latest title conquest had died down, June Mar Fajardo didn’t take too long to think about the first thing he would do after winning his latest Philippine Basketball Association (PBA) crown.

“I’m booking a flight home to Cebu immediately and sleep beside my Mama at the cemetery,” he told the Inquirer in Filipino.

“I’ve got a lot of stories to tell her,” he added.

San Miguel is back on the mountaintop of the PBA Philippine Cup, reclaiming the lofty perch in the centerpiece tournament it once ruled for five straight years.

The Beermen have also gone through several facelifts as they worked to snap a title drought, dealing away two of its most seasoned veterans in a bid to address an aging roster. As it turned out, all they really needed was Fajardo’s return to form after a gruesome leg injury. And just like that, the Beermen are again the barometer by which all teams competing for the league’s most precious trophy will be measured. The club’s cornerstone, also the league’s six-time Most Valuable Player (MVP), broke his right shin bone during a practice ahead of the 2020 season.

Fajardo’s rehabilitation took a little over a year, and the results did not look convincing at first. The 6-foot-10 big man struggled in his first game back, tallying just five points, five rebounds and an assist in a 93-87 loss to Meralco in July 2021.

Big man with a leg injury? Suffice it to say there were well-founded fears that Fajardo’s best years were behind him.

“It crossed my mind—that I won’t be able to come back to my old performance,” he said nonchalantly as he changed into street clothes, preparing to celebrate the club’s 28th title overall in a hotel in Mandaluyong City.

“That injury was no joke. They said it was career-threatening,” he added.

The past two years feel like an unimportant footnote now, with San Miguel on top of the all-Filipino food chain. Even more for Fajardo, who bookended a ninth PBA title with the Best Player of the Conference (BPC) and Finals Most Valuable Player awards.

Overall, Fajardo now has nine BPC trophies and four Finals MVPs. And as far as traditions go, he is on track to reclaim the league MVP plum for a seventh time.

For the Beermen and for Fajardo, the worst might be over.

“We’ve been through a lot as a team. And for me, personally, my journey has been really, really tough. And I lost my mama, too,” he said. “This (title) is bittersweet,” said the self-confessed mama’s boy, who has had his mother beside him to celebrate his previous eight PBA crowns. This latest title will be Fajardo’s first since her death. “But at least, I have my Papa with me. And to see him happy, I feel like I’m fulfilling what I’ve always hoped for—to make my parents happy.”

“I know my Mama is proud of me. She’s been guiding me throughout my career. Her presence has always been there,” he said.

Back in June, Fajardo put together a donation drive to honor his late mother. He pledged P200 for two-pointer made, P1,000 for a triple and another P100,000 should his team make the Finals to a target beneficiary that will be determined by the league.

The soft-spoken giant raised around P230,000 by the conference’s end. The last thousand bucks capped San Miguel’s scoring spree in the fourth quarter; as the shotclock wound down, the 32-year-old Fajardo hit one triple—his lone attempt in the game—to punctuate the championship-clinching rout.

“That’s a tribute for my Mama,” he said.

“I’ll sit on a rocking chair and do it again,” he said, now smiling and while flicking his wrist to recreate that step-back triple.

“And then say, ‘Ma, if you were there, I would have pointed [toward your direction].’”

Fajardo arrived in his home province of Cebu on Tuesday morning. And it didn’t take long for him to settle on a rocking chair, in front of his mom’s final resting place, telling her stories like he said he would.