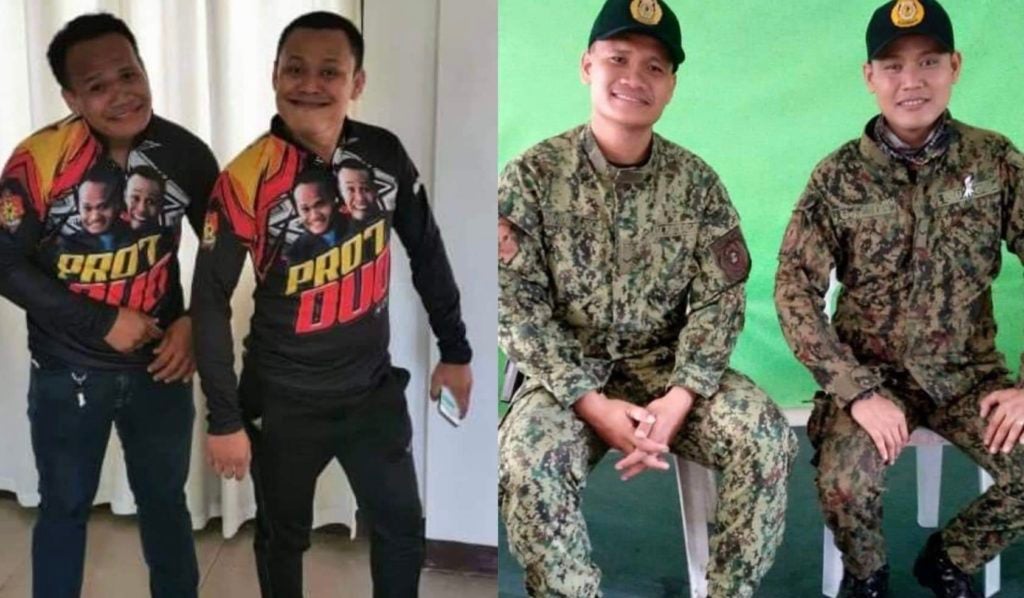 Police Corporal Delfin Gaihe (right of both photos) and Patrolman Joesue Colipano play their roles as entertainers when they do their jobs as the PRO-7 Duo. In the left photo, the PRO-7 Duo in their police uniforms. | Contributed photos

CEBU CITY, Philippines — They were entertainers working in different radio stations before they shifted careers to become policemen.

But Police Corporal Delfin Gaihe and Patrolman Joesue Colipano never expected that their stint in the radio stations as “comedians” or entertainers would serve them in good stead today in helping the Police Regional Office in Central Visayas (PRO-7) to deliver the office’s message to the community even in a social media platform.

In fact, they clicked together in hosting activities of events for the PRO-7, and they have been dubbed as the duo entertainers of the Philippine National Police (PNP).

But how did they reach this level? How did they do it? Well, it was more of a give-and-take thing with the duo, especially since they share the same love for comedy and a desire to serve the public.

And eventually, they developed a bond, a chemistry, and now consider themselves as brothers.

(We clicked because we have the same way of handling things. We joke a lot. And even if he is senior [Gaihe] that I am, he treats me like I am the same level as he is. At first, we have little conflicts, we cannot agree on certain things. That is why we tried to find out where we can reach a common ground.)

Since they have become the PRO-7 Duo, they have already reached several areas to perform and spread the PNP’s message to the public not only in Region 7, but also in the National Capital Region, in Bicol Region, among others.

And they have been doing this job of entertaining as a way to serve the public through the programs of the police force, particularly PRO-7 since 2018 — the year when they started as the PRO-7’s duo.

Police Corporal Gaihe entered the police force in 2016, but prior to that he was a radio drama actor of Bombo Radyo for three years. He was then popularly known as “Way Kurat” or “Don Romantico.”

Gaihe of Ginatilan and Balamban towns has been known in Bombo Radyo Cebu for his antagonistic and gay drama roles.

He shares how he ended up as a radio drama talent.

He said that since he was an elementary student, he already had a knack for making people laugh and you guessed it, he was always been the classroom’s comedian.

Since he can remember, he has always enjoyed seeing people smile and hearing their laughter from his jokes or just from the way he talks.

Despite his drive to be a comedian, Gaihe also has other lofty dreams like being a lawyer.

However, due to financial constraints, he instead ended up enrolling in an education course, which his parents can afford. He enrolled, studied, graduated, and got that education degree at the Cebu Normal University.

And he said that being a comedian and a radio entertainer was sometimes not a walk in the park.

He remembered of days when he was not feeling well when going to work and he had to force himself to be lively and focus on his role because he had to, and it was his job.

(So I just imagined myself to be just pretending. In drama, even if I’m not in the mood, but when I reach the radio station, do your part because you are a comedian.)

Despite doing well as a radio drama actor, Gaihe still has that itch to serve the public. So in 2016, he entered PNP, and eventually, he got assigned to the Police Community Relations Office and ended up as one half of the PRO-7’s Duo.

And like his radio drama actor days, Gaihe has applied how to play the role of an entertainer despite how one feels whether he is at a low point in life, tired or hyped up and happy.

(You put a label to yourself because I am a comedian. Even if I am tired, that is my role now.)

As for the other half of the PRO-7 Duo, Patrolman Colipano, he also started in the industry as a popular disc jockey or DJ of MOR 97.1, an FM radio station.

Being a DJ for three years, he also learned to dish out jokes during his radio programs on the FM station.

And like Gaihe, Colipano was also an education graduate. He graduated from the Cebu Technological University.

He also looks back and shares his journey as a police officer.

That prior to being a DJ, Colipano was a loan officer of a lending company in Tacloban, and then a section head of a store in Consolacion town in Cebu.

He ended up being a disc jockey, when he met other DJs of the FM station doing an errand at the store he was working then.

He asked them if there was a job vacancy for a DJ and that he would like to apply.

He also asked what was the most important value for a DJ to which they responded — “Being trusted by your audience.”

He then applied for the job, got hired, and became one of the DJs of the FM station for three years.

Colipano said that the value of “Being Trusted” as media personality had been the driving force for him to join the PNP.

When he quit his DJ job to shift careers and become a policeman in 2017, he then believed that he was really changing careers to serve more people and that he was certain then that he would leave the entertaining to others.

But today, he feels that it is an irony to him that he ends up as a policeman entertaining people as the other half of the PRO-7’s Duo.

The PRO-7 Duo, Gaihe and Colipano, have learned to accept their roles and that this is just another way to serve the people.

And when it is the time to entertain people and the curtains rise for the duo to play their roles as hosts during Facebook Live events, Gaihe will usually take the lead with his introductory spiel.

And then the show is on for the duo as they play their roles as policemen using their best weapon to win over the community — their talent to entertain and deliver the PNP’s message to the public clearly and effectively.

Read Next
Faithful and humble