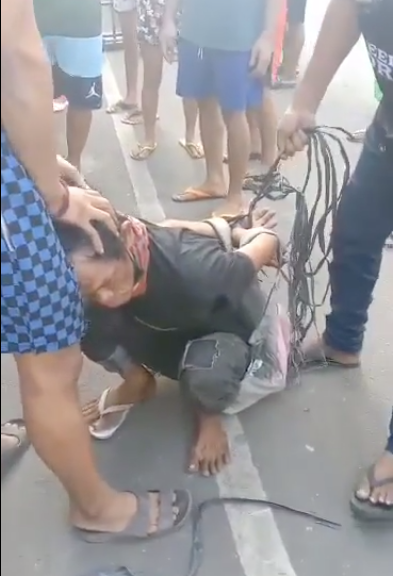 A man, who allegedly mauled her hungry 1-year-old daughter for crying after he allegedly used illegal drugs, is arrested in Carbon, Cebu City this afternoon, Sept. 26. | Contributed photo via Pegeen Maisie Sararaña

CEBU CITY, Philippines  — A 44-year-old man, who allegedly mauled his hungry one-year-old daughter after he heard her cry for milk when he finished using “shabu,” was arrested at the Carbon Public Market in Cebu City on Monday afternoon, Sept. 26, 2022.

Police Staff Sergeant Joseph Bejer of Carbon Police Station confirmed that the father, a certain William, was caught via citizen’s arrest at the Carbon Public Market in Cebu City.

This was three days since he left Compostela town in northern Cebu and after he allegedly mauled his one-year-old child.

Based on the Compostela Police report, the suspect and his wife had an argument over money at around 11 p.m. on Sept. 23. The wife complained about the suspect allegedly spending their money on buying illegal drugs.

Later, the suspect allegedly forced his wife to sniff “shabu.” Then he also used the illegal drug, but when he finished sniffing shabu, their one-year-old daughter, who was hungry, cried for milk.

This made William angry. He then allegedly mauled his daughter where he allegedly hit her several times in the body.

When William left the house later, the wife hurriedly went to the Compostela Police Station and reported the alleged domestic abuse.

Bejer, for his part, said that they had already turned over William to the Compostela Police because the complaint against the suspect was filed in Compostela town.

Children’s nightmare: Violence, death at the hands of people they trust most

Magpale urges victims of domestic violence to speak up and fight