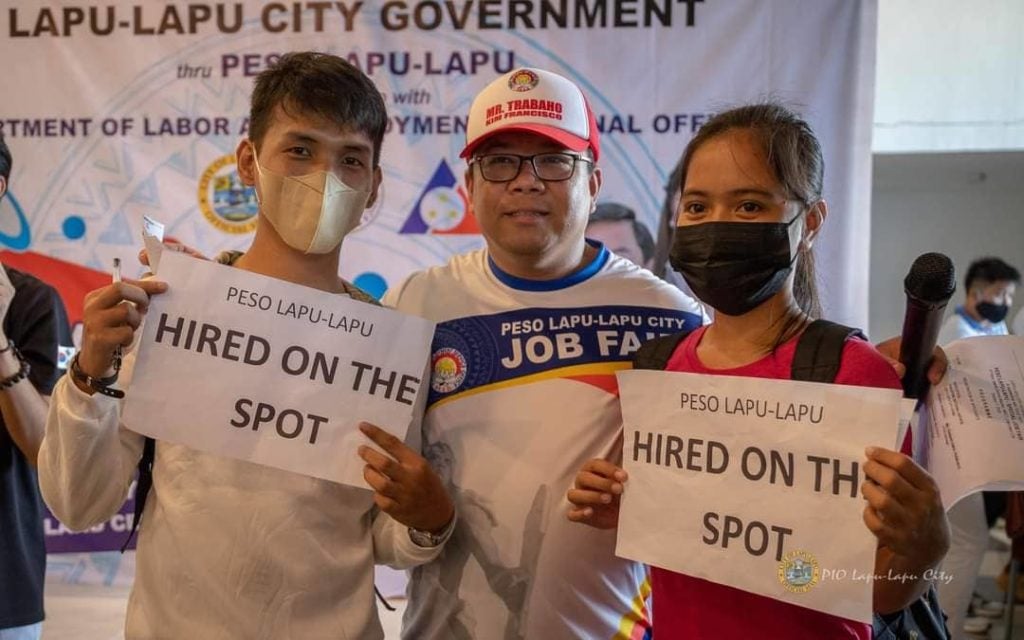 LAPU-LAPU CITY, Philippines — Some 118 applicants were hired on the spot (HOTs) during the special job fair in Lapu-Lapu City on Friday, Oct. 7, 2022, which was held at Island Central Mactan in Barangay Ibo.

This was confirmed by Kim Francisco, head of the Lapu-Lapu City Public Employment Services Office (PESO), as of 5:09 p.m.

The special job fair was intended for the more than 4,000 retrenched Mactan Export Processing Zone (MEPZ) workers and to other jobseekers.

Mayor Junard “Ahong” Chan, who attended the job fair, said that the activity was participated by 17 companies, offering 7,000 job vacancies.

(That is our campaign promise. We should nourish them, take care of them. We should give them a chance to grow and let each family prosper.)

Congresswoman Cindi King-Chan also said they would try to have job fairs as often as possible.

(We won’t stop to hold and organize job fairs as long as there are those who need jobs.)

She said the local government, through her office, facilitated the job fair to bring these companies closer to the jobseekers.

(So that they can stay in one place to apply to the companies available.)

Ringca, during the job fair, announced that initially they had allocated 100 slots for NCII call center training, 25 slots for electronics, 50 slots for driving and 50 slots for “hilot” or massage therapy to the retrenched MEPZ workers.

Aside from this, he said that they would also request additional fund to accommodate all 4,000 retrenched workers of MEPZ.

At the job fair, the Social Security System (SSS) booth will also facilitate unemployment insurance and involuntary separation benefits for the displaced workers.