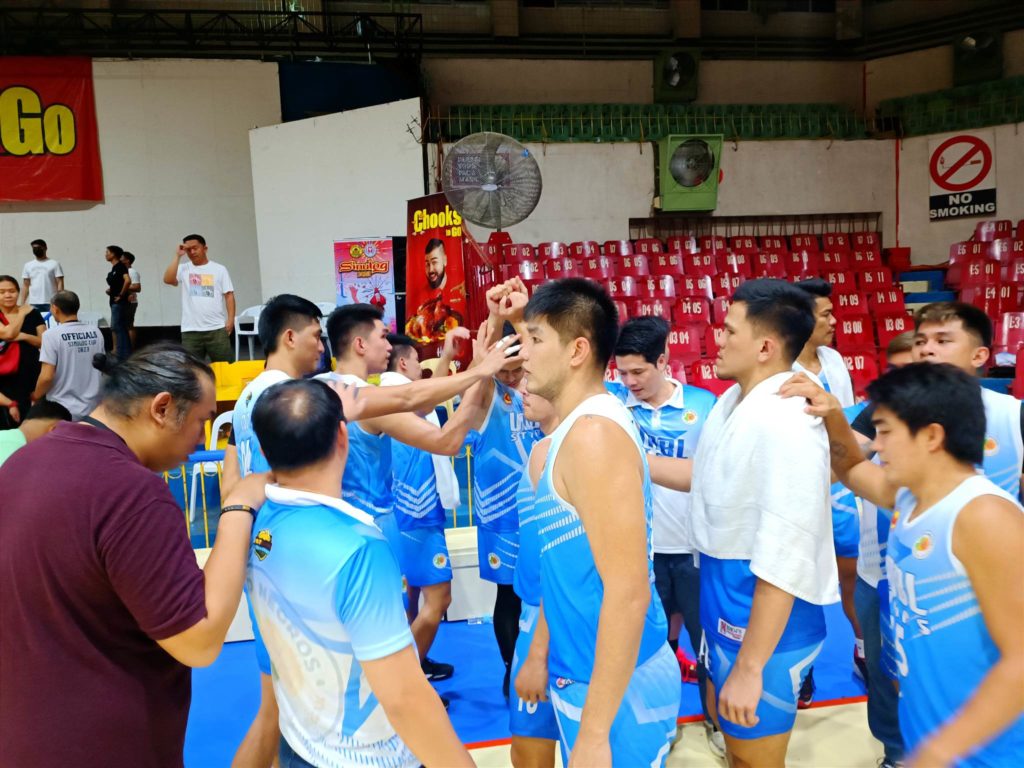 UNBL All Stars huddle up after beating the UC Webmasters on Friday in the Sinulog Basketball tilt. | Glendale Rosal

This time, however, they had a hard time disposing of the equally determined Webmasters.

After the dust has settled down, UNBL’s Yvan Ludovice tallied 13 markers, 9 of which came from the three-point line. He paired it with 10 rebounds, 4 assists, and 1 steal.

“It wasn’t an easy win for us because UC had plenty of shooters. As you’ve noticed we’ve adjusted throughout the game because of their shooters. Fortunately, our shooting was efficient tonight and we banked on defense for this hard-earned victory,” said head coach Alex Angeles.

UC’s Jasper Pacaña dropped 15 points, 12 of which came from beyond the arc along with 5 assists and 1 rebound. Fellow guard Paul Galinato had 11  markers, while forward Michael Diaz had 10 as the Webmasters bowed out of the tournament after their 0-2 campaign.

Nonetheless, the Webmasters will try to bounce back as they campaign in the inter-collegiate basketball tournament in Dalaguete town, south Cebu, starting tomorrow along with three other Cesafi teams.

Meanwhile, UNBL will face K&L Marketing of the City of Naga at 5:30 PM at the same venue for the positioning for Sunday’s semifinals.

In the other game, K&L eked out a thrilling victory against the University of Southern Philippines-Foundation (USP-F) Panthers, 82-80, to remain unbeaten in two games, while the latter dropped to 0-2.

The Panthers’ Aljie Mendez had 16 points, while Jasper Lumingkit tallied 13.

On the other hand, the EGS Aneda Builders edged the University of San Carlos (USC) Warriors, 75-69, in the other game on Friday.

Jerome Napao and John Galinato each scored 16 points to lead EGS to their second straight win, while the Warriors started their campaign with a loss against the former.

USC eyes redemption today at 4:30 PM against the Benedicto College in the first game, followed by UNBL and K&L’s showdown at 5:30 PM.

DH25-Rock Uniform Solutions (RUS) will take on the EGS Aneda Builders at 7:00 PM.