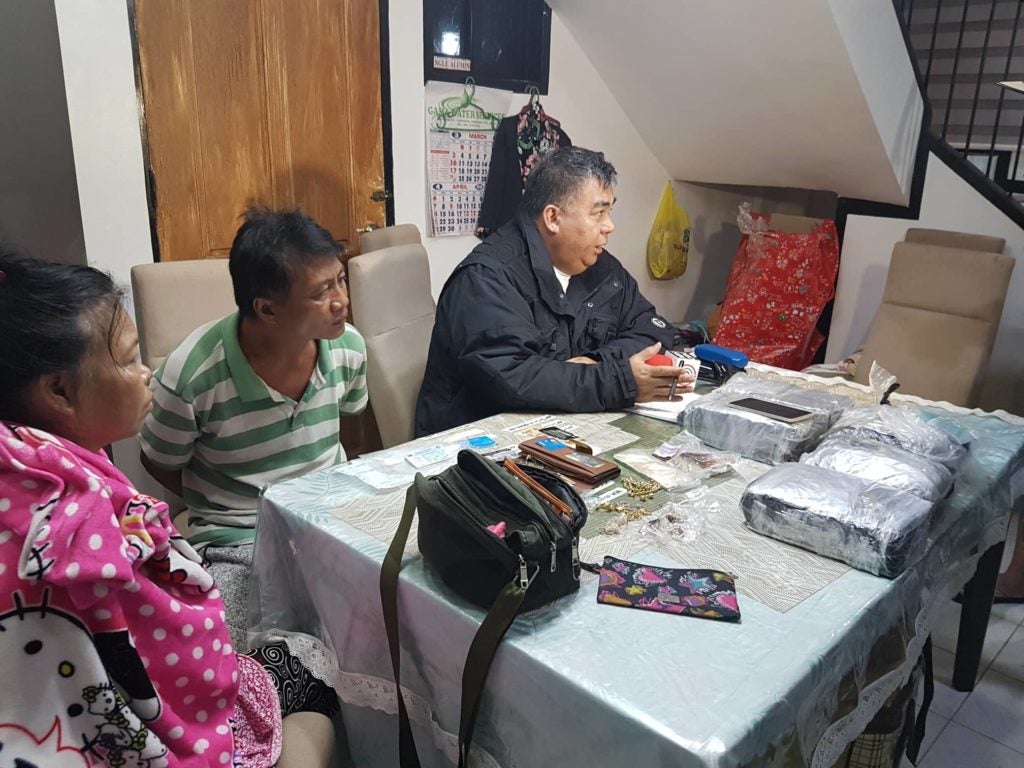 Police Brigadier General Debold Sinas, Police Regional Office director, presents the parents of drug suspect Jocelyn Encila, who handed over the suspected shabu during a followup buy-bust operation in Consolacion town in northern Cebu. This was inside the suspect’s house in Consolacion. |CDN Digital photo by Benjie Talisic

CONSOLACION, Cebu —The police will request the the Anti-Money Laundering Council (AMLC) to investigate how arrested drug suspect Jocelyn Encila acquired her properties.

They are also working on how these properties, which are likely ill-gotten wealth, be turned over to the AMLC.

Police Brigadier General Debold Sinas, Police Regional Office director, said, in an interview with Cebu Daily News Digital, that Encila, who was arrested in a followup operation by the Cebu City Police Office after she was caught with 10 kilos of suspected shabu on Sunday, March 3, had no clear source of income and yet owned several properties.

Sinas said the 10 kilos of shabu had an estimated Dangerous Drugs Board value of P68 million.

The Barangay Casili, Consolacion operation was conducted after the buy-bust operation in Cebu City where 18 kilos of shabu, which had an estimated worth of P122.4 million, were confiscated and the arrested suspect pointed to Jocelyn Encila as the alleged supplier of the illegal drugs.

Sinas said that it was likely that Encila acquired her properties through her sale of illegal drugs.

Sinas said Encila owned a house in Barangay Casili, Consolacion town where the 10 kilos of suspected shabu were found, another house and lot in Liloan town, and a condominium in Cebu City.

He also said that aside from the real estate properties, Encila also owned three vehicles, which her parked outside her house in in Liloan town.

These vehicles included a Toyota Fortuner and a Toyota Grandia.

Aside from that, several expensive pieces of jewelry were also found inside Encila’s Consolacion house.

He said that it would not add up if we compare her income and her properties.

He said she had no clear source of income and yet she owned these properties.

Sinas said that Encila’s clear source of income came from Encila’s parents — her father claimed they were selling charcoal and her mother was selling halo-halo.

However, Encila’s father and mother, who were also arrested in the buy-bust operation at past 1 a.m. on Sunday, March 3, insisted that the properties they owned were not ill-gotten wealth or were bought through the sale of illegal drugs but these were allegedly acquired with the help of Jocelyn’s brother, who had been working abroad.

Sinas has tasked Major Pelare, who is a lawyer, to assist and follow up on the requirements to have Encila’s properties be turned over to the AMLC./dbs