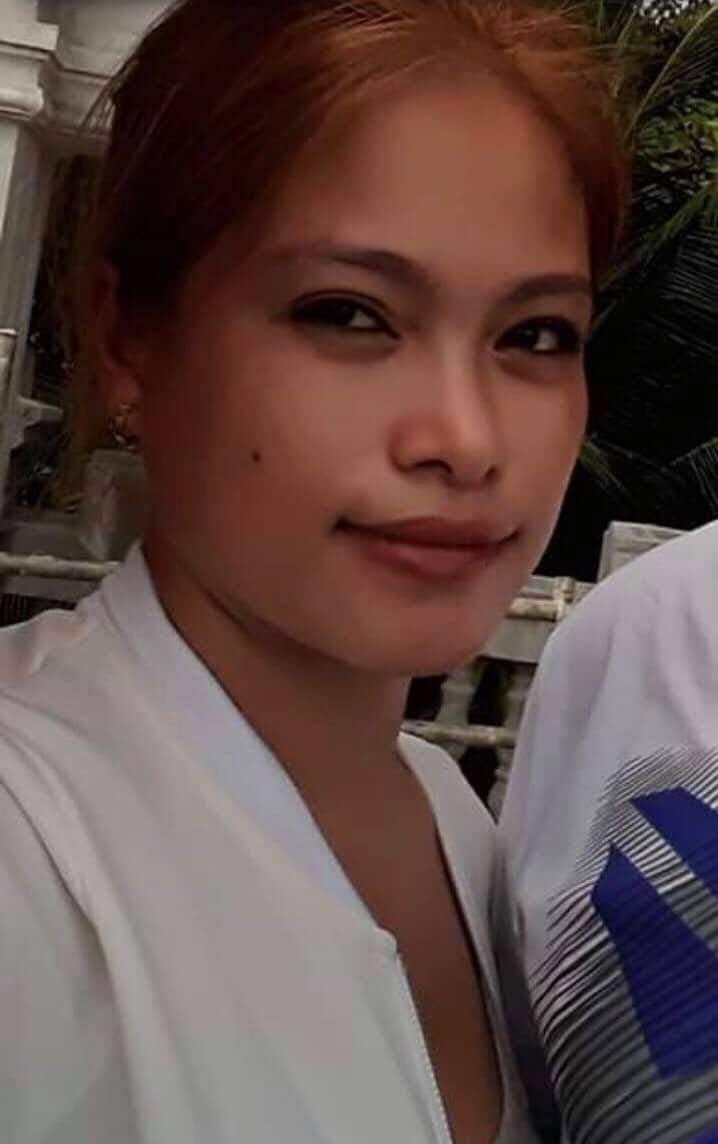 CEBU CITY, Philippines — She was dubbed as Consolacion’s drug queen when police found out that she was the source of 28 kilograms of shabu, worth P190.4 million that they confiscated in two, separate anti-drugs operations last March 3.

But the story of Jocelyn Encila can be one for the movies.

Encila, a pretty woman in her early 30s known to many as “Joy,” lies at the heart of the Rustico Ygot Drug Syndicate, whose illegal activities were  discovered by authorities following her arrest inside a hospital in Consolacion town and after police raided her house in a subdivision in Barangay Casili of the northern town, located 19 kilometers from Cebu City.

A copy of the matrix of the Ygot drug group, formulated by the Regional Intelligence Division (RID) of the Police Regional Office in Central Visayas (PRO-7), was furnished to the media on Sunday, March 10.

Based on the RID’s intelligence monitoring, Encila and Ygot were ex-lovers. Encila helped Ygot run a drug syndicate from the confines of the latter’s prison cell at the New Bilibid Prison (NBP) in Muntinlupa City through smartphones and a stable, internet connection.

“Joy started to get involved in the illegal drugs in 2017,” said Senior Superintendent Remus Medina, chief of RID-7.

Since then, Medina said Encila, together with other members of her family — her father (Marcial), mother (Marilyn), and sister (Janelyn) — amassed wealth, which police believed came from drug proceeds. The Encilas are natives of Consolacion, Cebu.

But aside from Ygot, Encila allegedly also has other connections that helped the drug group in their illegal activities.

Most of these individuals happened to be her alleged lovers, both current and former ones. And interestingly, some of them are  law enforcers in active service. 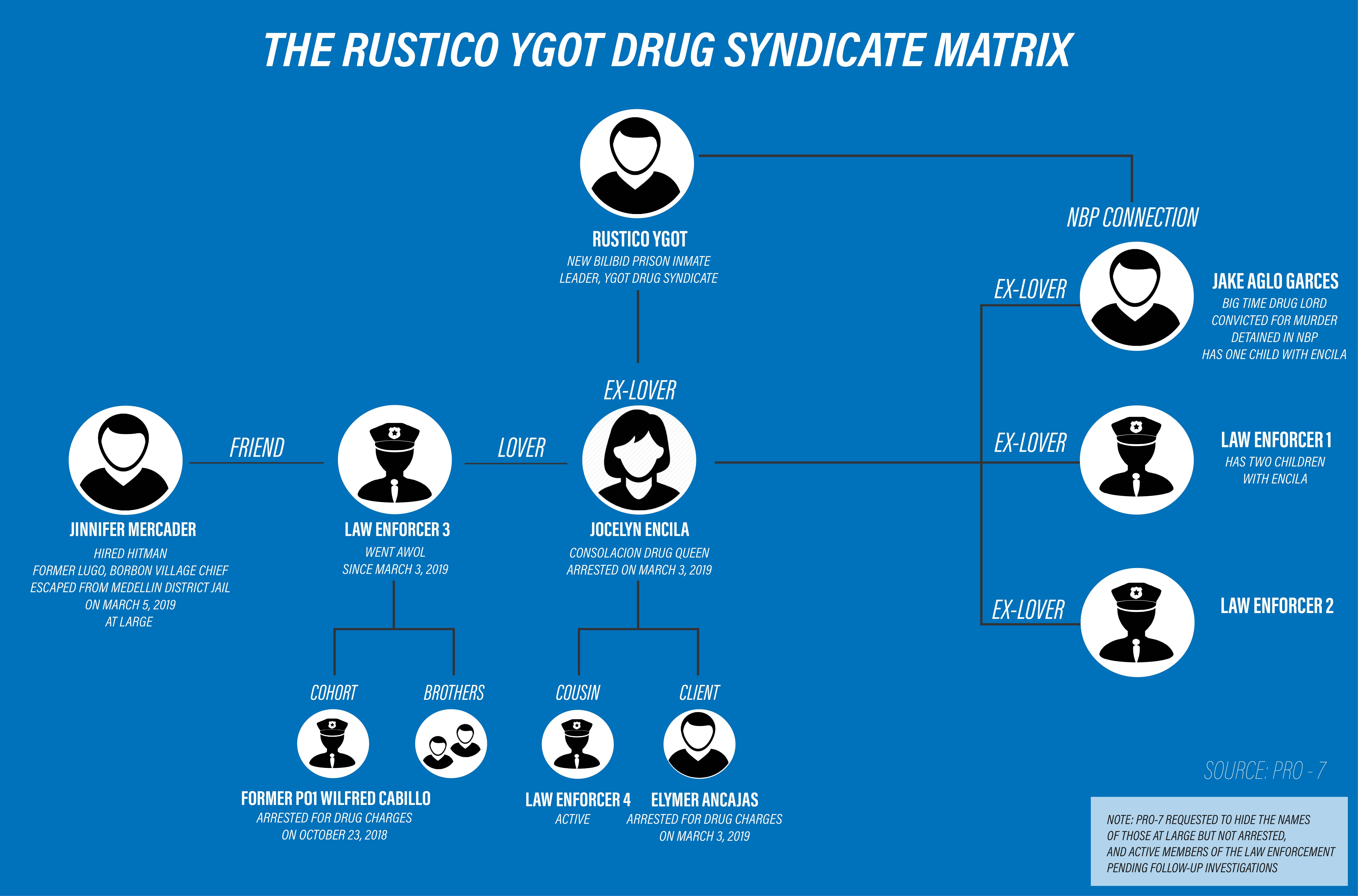 A matrix of the Rustico Ygot Drug Syndicate whose illegal activities in Cebu were uncovered following the arrest of one of its members last March 3 | CDN Digital Photo by Morexette Marie B. Erram

According to the matrix, Encila had five lovers, including a policeman who went AWOL (absent-without-leave) since she was arrested.

Medina confirmed this to members of the media.

However, he requested not to disclose the police officer’s identity, and the unit he was assigned to, pending follow-up investigations and operations.

He also said they had yet to establish whether or not the police officer helped Encila in the illegal drugs trade.

He said that Encila could dispose of up to 20 kilograms of shabu per week.

Before Encila was in a relationship with the policeman, who went AWOL, the matrix showed that the 31-year-old ‘Consolacion drug queen’ had previous relationships with another inmate from NBP, and officers from the Philippine Coast Guard (PCG) and the Philippine National Police (PNP).

Medina said Encila first had a relationship with Jake Arglo Garces, who is also detained in NBP for murder charges. Their relationship bore a child, who is now 13 years old.

Garces was convicted for killing a macho dancer, identified as Gabriel Dayondon, in Barangay Capitol Site, Cebu City, in 2010 over jealousy. Based on earlier news reports published, he suspected Encila was attracted to Dayondon.

But before this, Garces, together with his younger brother, was also arrested for indiscriminate firing at a residential area in Barangay Labogon, Mandaue City. Police officers confiscated several firearms and live ammunition from the Garces brothers.

Garces is also accused of having links in the illegal drugs trade.

Medina said investigators believed it was Garces who introduced Encila into illegal drugs, and when he was transferred to the national penitentiary, referred her to Ygot.

Police, however, had yet to establish a link on how Encila kept in contact with Garces.

But even before Encila became close, and had a relationship with Ygot, she was reportedly dating a high-ranking officer from the Philippine Coast Guard (PCG) in Central Visayas.

Medina said they had yet to determine if the PCG officer had anything to do with Encila’s illegal activities.

“We already invited him to our office to shed light into this,” Medina added.

Although Encila’s relationship with the PCG officer did not last long, they had two children.

Encila’s third lover was a policeman, who happened to be the team leader of Encila’s current lover.

But even if Ygot and Encila broke off their relationship, Medina said Encila continued their partnership in the illegal drugs trade, and could dispose of as much as 20 kilograms of shabu per week in Cebu.

From 2017 until she was arrested on March 3, 2019, Encila managed to acquire wealth beyond the combined means of her parents — Marcial and Marilyn — and her siblings – Janelyn and a brother based abroad, whose name was not disclosed pending follow-up investigations.

Records from RID-7 showed that Encila managed to buy more than four parcels of land, mostly ranches, in different parts in Cebu within a span of one year, and a high-end condominium unit in Cebu City.

She also owned at least three brand new vehicles, including a Toyota Fortuner and a Toyota Grandia, and a two-storey concrete house in a subdivision in Consolacion, which was equipped with closed-circuit television cameras (CCTV), surrounded by a towering concrete fence topped with barbed wires.

Janelyn, who was shot dead just days after Jocelyn and their parents’ arrest,  was reportedly unemployed, and had no clear source of income. Encila also has a brother, who works abroad, but police said they had yet to determine if he, too, was involved in the illegal drugs trade.

Police also discovered that the Encila family also possessed several valuables such as jewelry, and a 24-karat gold medallion depicting an image of the Señor Santo Niño.

Investigators are now coordinating with the Anti-Money Laundering Council (AMLC) to check if the properties and other assets Encila purchased were through money remittances from her brother, or were acquired through her drug proceeds.

Like most of her relationships, Encila’s life as a drug peddler, filled with luxury, was short-lived. It came to an end when police conducted a buy-bust operation against one of her clients, Elymar Ancajas.

The arrest of Ancajas inside a subdivision in Barangay Inayawan, Cebu City at dawn of March 3 was the start of Encila’s downfall, and the uncovering of the Ygot drug group’s operations in Cebu.

Police confiscated 18 kilograms of shabu from Ancajas who told operatives that he sourced his supply of illegal drugs from Encila.

A follow-up operation was conducted against Encila, who still managed to transact with a policeman posing as a buyer even if she was admitted in a hospital. An estimated 10 kilograms of shabu were seized from Encila’s house.

Janelyn, however, was not fortunate when her life ended tragically on the evening of March 6 in Barangay Labogon, Mandaue City.

READ MORE: Sister of the woman nabbed in the P190.4-million shabu busts killed in Mandaue City

But police said it was not a coincidence when Jinnifer Mercader, a known hitman from Borbon town in northern Cebu, escaped from the Medellin District Jail on March 5 or two days after Encila’s arrest.

Medina said they found out that Mercader and Encila’s current boyfriend were friends, and police believed that somebody helped the former escape from jail to kill anyone who knew about Ygot’s drug syndicate, including Janelyn.

Mercader, a former village chief of Lugo in Borbon town, northern Cebu, was arrested in 2017 for illegal possession of firearms. He had admitted to being a hitman, and presumably had been hired by some politicians.

READ MORE: ‘I was a hitman’

Mercader, who is considered a high-risk inmate, remains at large. Authorities from the Bureau of Jail Management and Penology (BJMP) are still conducting an investigation to shed light on his escape.

READ MORE: BJMP-7 not discounting possibility of inside job in Medellin prisonbreak

Also mentioned in the matrix are the brothers of Encila’s present boyfriend, former PO1 Wilfred Cabillo, an active policeman believed to be Encila’s cousin, and Ancajas.

Cabillo was arrested in 2018 through an arrest warrant for violation of the Comprehensive Dangerous Drugs Act of 2002, after spending one year in hiding. Cabillo is reportedly a close friend of Encila’s boyfriend.

The former cop is now detained in the Cebu City Jail./dbs