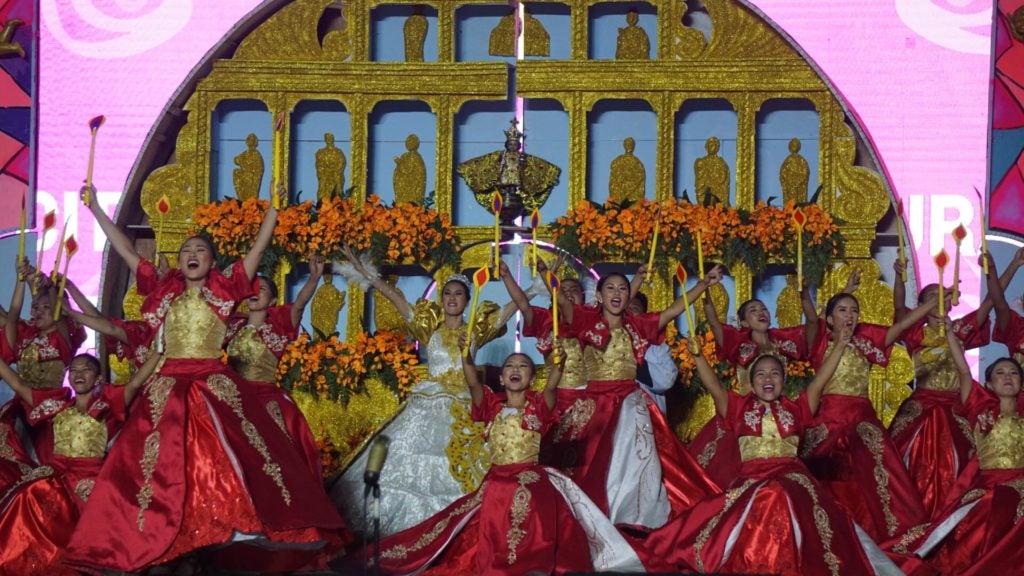 The Sinanduloy Cultural Troupe of Tangub City performs at the Sinulog Grand Showdown at the Cebu City Sports Center on January 19, 2020. | Raul Tabanao

This was the statement of the Elmer “Jojo” Labella, executive director of the Sinulog Foundation Incorporated (SFI) and brother of Mayor Edgardo Labella, after the 13-hour festival.

Jojo said he was ecstatic that despite only one week of selling the grand showdown tickets, all 13,000 seats of the grandstand were filled with “energetic people.”

“This goes to show the support of the Cebuanos to Sinulog, which I am very thankful for. Bisag late nagsugod og baligya, kahibaw ang tawo nga sulit ra (Even if the tickets were late, the people knew it was worth it),” he said.

The Sinulog 2020 pushed through despite issues surrounding the festival after the new Sinulog Governing Board was formed by Mayor Labella in 2019, causing confusion on who will run the festival.

SFI continued on and the festival was the first Sinulog organized by two coordinating bodies.

Aside from the confusion on the organization, the SFI also faced issues on exclusivity contracts undertaken with a local cable broadcasting station and a food giant.

Mayor Labella intervened with the exclusive broadcasting of the Sinulog, as he said that this was contrary to the public nature of the Sinulog.

Despite these issues, Jojo said the SFI continued to work on the Sinulog.

His great success is the visit of President Rodrigo Duterte, a first in Sinulog history.

He said that despite the festival ending later than usual, and the security inconvenience that the public faced, the President’s visit made the festival more meaningful.

Jojo said he was quite satisfied with the Sinulog turnout.

Not his brother, though, as now that the Sinulog has officially ended, the SFI may be facing an investigation for undertaking exclusive contracts, which the mayor sees as disadvantegous to the city.

On the opening ceremony of the Grand Parade, Labella told the media he would pursue the investigation on these contracts.

SFI’s troubles may not end in the culmination of the Sinulog 2020 after all./dbs