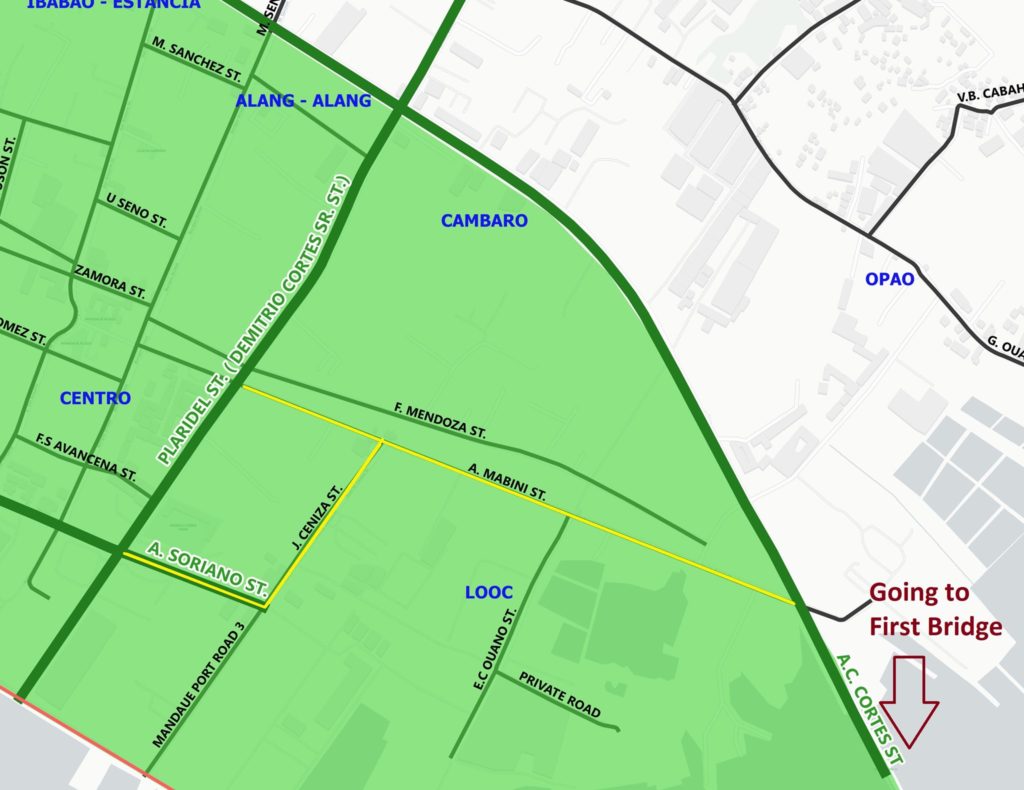 MANDAUE CITY, Cebu, Philippines — Congestion greeted motorists on Friday, May 21, during the dry run for the implementation of a new traffic policy on roads in Barangay Looc that are located close to the Mandaue-Mactan Bridge.

Under the new scheme, all vehicles that are headed for the old bridge and are coming from A. Soriano Avenue and D. M. Cortes Street will no longer be allowed to pass J. M. Ceniza Street and C. Ouano Street (Mabini Street) for at least three hours, during the afternoon peak hours, from 4 p.m. to 7 p.m. daily.

“TEAM has started the dry run today and the traffic personnel are guiding all the drivers of vehicles to where they must pass during these hours,” the Traffic Enforcement Agency of Mandaue (TEAM) said in an advisory that was posted on its Facebook page late afternoon on Friday, May 21.

But unhappy motorists questioned the new scheme saying that these contributed to congestion in the area instead of easing the traffic problem there.

(It doesn’t make sense. At that time AC Cortes is really congested, so at that time, they should let motorists pass C. Ouano St. from A. Soriano. Right? Just my 2 cents.)

(And motorists from Cambaro going to Lapulapu, we still have to go the long route?)

Edwin Anthony Jumao-as, TEAM’s executive director, said the new scheme is in line with Barangay Looc Resolution No. 08 Series of 2021 “recommending to the city mayor and TEAM to have a designated schedule for vehicles passing through Barangay Looc roads going to Lapu-Lapu City.”

“This is also for the safety of the residents because roads are congested during peak hours,” Jumao-as said.

He said that traffic enforcers would be deployed in the affected roads to apprehend motorists who would fail to follow the new traffic scheme that would be implemented starting May 24.

But motorists said that roads should be left for their use and not closed to accommodate residents in the area.

(Safety of the residents? Why? Are they on the road? They did mandatory road clearing before, right?)

(Mandaue, king of no left turn, no Uturn and now No entry. Instead of looking for a way to ease the traffic, they are congesting AC Cortes instead. Those from Looc. There area will not be congested and the people there made the road their sala, parking area and a small market … the ones who made this rule have small minds … if you have a problem with motorists making a right turn to the bridge … place an enforcer who can man traffic so that vehicles can pass one at a time. The enforcer there would always take shelter or hide to catch violators or would just stand at the side of the road. Those who thought of this rule has a rural kind of thinking and not one suited for the city.)

Read Next
Motorists jailed for disrespecting a CT-TODA enforcer