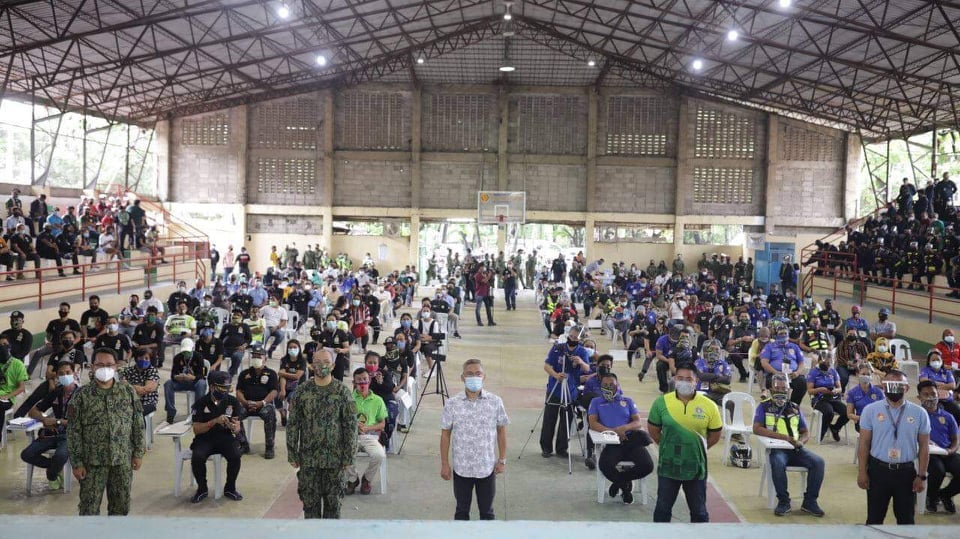 MANDAUE CITY, Cebu, Philippines — Mandaue City now has an estimated 8,000 force multipliers or volunteers to help keep the peace and order in the city.

Police Colonel Jonathan Abella, Mandaue City Police Office chief, said that these force multipliers came from different sectors of the community such as the LGBTQ+, Muslims, teachers, and students, among others.

(That is our support groups. They will assist us in maintaining peace and order, then identify possible threats of the NPAs in the area. In case there is such a situation, we can then tap them. That is a better option because they are in the barangays, schools or the workplace.)

Abella said this as at least 100 of these volunteers were sworn in as force multipliers in an activity led by Mandaue City Mayor Jonas Cortes today, May 27, at the Subangdaku Barangay Gymnasium.

Abella said aside from the 100 force multiplier,. who attended physically, there were others who attended via zoom meeting.

Mayor Cortes, for his part, said he was happy and thankful to the volunteers who really showed their support to help police in suppressing crimes, illegal drugs, and addressing peace and order issues in their communities and hoping others would be attracted to do the same.

(We really lack MCPO personnel. So I am happy that there are concerned citizens who are willing to volunteer. For me, the action of these groups, who assisted and supported the police,  are something to be proud of.)

The ceremony was also spearheaded by all police station heads and some police personnel, barangay tanods, among others.

Abella said the swearing in of the force multipliers was in line with President Rodrigo Duterte’s proclamation of Executive Order No. 70 last December 28, 2019, institutionalizing the “Whole-of-Nation Approach” in attaining inclusive and sustainable peace, creating a national task force to end local communist armed conflict (ELCAC).

He also encourage those who would still want to be force multipliers to  join groups and have themselves registered there.

Mandaue City is now getting ready for floods and rains

Territorial disputes between Mandaue barangays to be resolved soon

Mandaue to elect its own congressman, 12 councilors in 2022 pollshttps://cebudailynews.inquirer.net/379407/mandaue-to-elect-its-own-congressman-12-councilors-in-2022-polls