Aside from manning the traffic at his assigned street, this enforcer sells sweets after work to help support his family

CEBU CITY, Philippines— A traffic enforcer in Mandaue City is on the spotlight for his simple side hustle, selling sweets at the back of the Mandaue City Hall.

Netizen Glenell Mendoza Sevilla spotted the enforcer Joseph Angtud, who she calls “Kuya Joseph,” and shared on her Facebook account last June 11, 2021, a photo of him behind his makeshift stall, hoping to make extra income to support his family, especially during these trying times.

In her post, she encouraged netizens to buy sweets from Kuya Joseph.

Hi everyone! This is Kuya Joseph. He’s a traffic enforcer here in Mandaue but since kita man gyud tanan ang affected sa…

In the photo, you can see sweet delicacies ranging from P50 to P70 arranged on top of a small table.

“His assignment is behind the Mandaue City hall, which is right across our house. He usually stays at our garage to seek shade when he’s on duty,” said Sevilla.

She said Kuya Joseph sells his delicacies when he gets off from work.

A lot of netizens appreciated this simple effort of this traffic enforcer/father in Mandaue City. 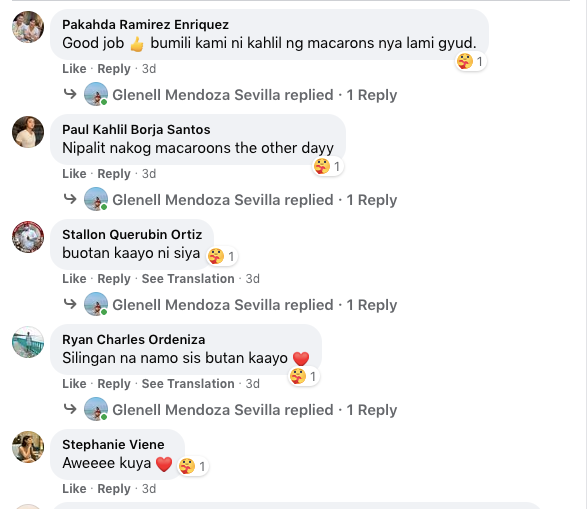 CDN Digital asked Sevilla what pushed her to share this story online.

She said: “I was really moved when I knew he had a side hustle. I used to always think that people like him who have jobs are luckier because they still have their own source of income but then I realized the pandemic does not only affect our less fortunate brothers and sisters but all of us.”

This is not the first time Kuya Joseph was on the spotlight.

It can be recalled that in 2018, this traffic enforcer helped a motorcycle rider when his motorcycle broke down in the middle of A. Del Rosario Street in Mandaue City.

On his way home and hungry after ending his shift, Angtud managed to still fix the motorcycle of the rider after borrowing some tools from passing motorists.

“Naguba iyang motor. Padung na unta ko mokaon pero nalooy ko kay ganina ra pud to sila nag sige og tan-aw sa ilang motor (His motorcycle conked out. I was about to eat but I pitied them because they had been trying to fix it for some time),” said Angtud.

The traffic enforcer again went viral days after that as he came to the rescue of a teenager who fainted on the street.

After learning that the post again went viral, Angtud said he wished that his little acts of kindness would serve an inspiration to others. The Mandaue City Local government recognized the good deeds of Angtud in 2018.

To Kuya Joseph, Happy Father’s Day and keep doing what you are doing because the future is bright for a father like you.

Dads are cool because…