Senior citizen crosses street in Talisay, gets run over by dump truck, dies 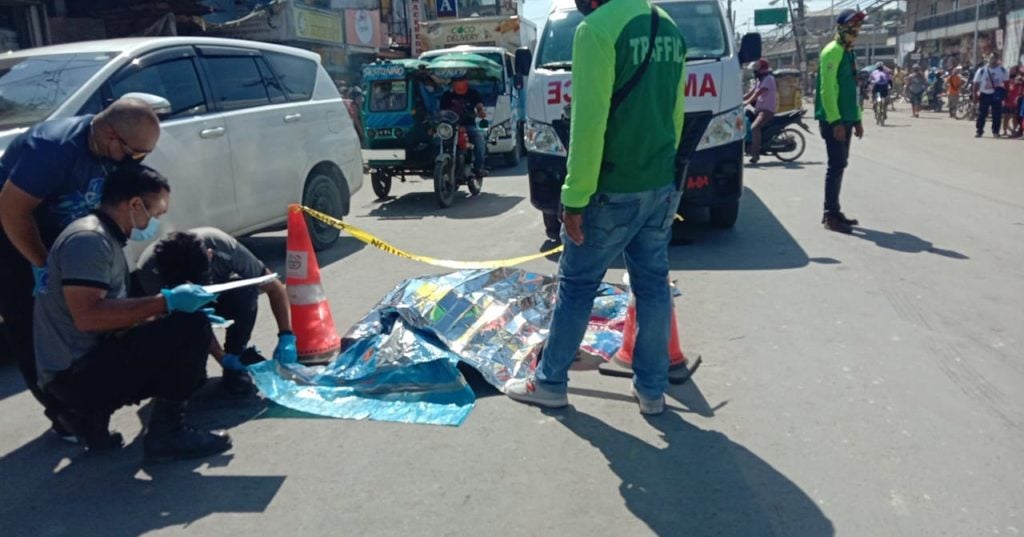 The body of a 67-year-old man is already covered with an emergency blanket as he lay dead on the street after he was run over by a dump truck in Barangay Tabunok, Talisay City on Saturday morning, September 18. | Paul Lauro

CEBU CITY, Philippines — A senior citizen, who was believed to have just bought medicine from a drug store, did not make it back home alive today, Sept. 18, after he was ran over by a dump truck as he was crossing a street in Barangay Tabunok, Talisay City.

Exuperio Catubay, 67, died after he fell down directly in front of the tires of the dump truck when he was hit by the left side of the truck as he was crossing the street at past 9 a.m. today, said Police Corporal Jerel Bulandres of the Talisay Police Traffic Office, in a phone interview.

Bulandres said that Catubay’s identity was known after they recovered a senior citizen’s ID of Catubay in his pocket, said Bulandres.

He also said that they found out that Catubay was only living with his nephews in Barangay Dumlog, Talisay City, and he had been alone since his wife and son had reportedly passed on.

Bulandres said that they were waiting also for Catubay’s brother, who lives in Samboan town in southern Cebu, to visit the police station and decide on whether to file a complaint or negotiate a settlement with the driver of the dump truck.

Benjie Escorial, 55, the driver of the dump truck, was held at the Talisay Traffic Police pending the filing of charges.

Initial investigation showed that Catubay had just came from the drug store and was crossing the street when he was ran over by the truck.

Escorial told police investigators that he did notice the senior citizen cross the street.

He claimed that he earlier stopped as the traffic enforcer allegedly allowed pedestrians to cross the street and then signaled him to move forward or proceed.

Police Staff Sergeant Bulandres, for his part, said that the truck that Escorial had driven used to take sand and gravel from a quarry site in Barangay Lagtang, Talisay City.

The truck driver Escorial told Bulandres that he had been driving since 2007.

But traffic enforcer, Jerry Bustillos of the City of Talisay Traffic Operations and Development Authority (CT-TODA), who was the one Escorial was referring to in his statement, denied the driver’s allegations that he signaled the driver to move forward after allowing pedestrians to cross the street.

(That is not true since I was far from the dump truck because I was apprehending a motorcycle rider at that time. After that, I turned back to the street and saw a man being run over by the dump truck. That is why I held (the driver in my custody for a while until the police arrived).

Bustillos also said that there were three duty traffic enforcers, at that time, but he was the one who was placed nearer the area where the accident happened.

He said he was around 10 meters away from where it happened.

But he said he could not have done what Escorial told investigators because he was apprehending a motorcycle rider at that time.

He said what happened on his part was he only saw the man already being run over by the truck.

He said he then called emergency responders to the area, who declared Catubay already dead when they arrived.

Meanwhile, Police Staff Sergeant Bulandres said that the body of Catubay was already at a funeral parlor in the city.