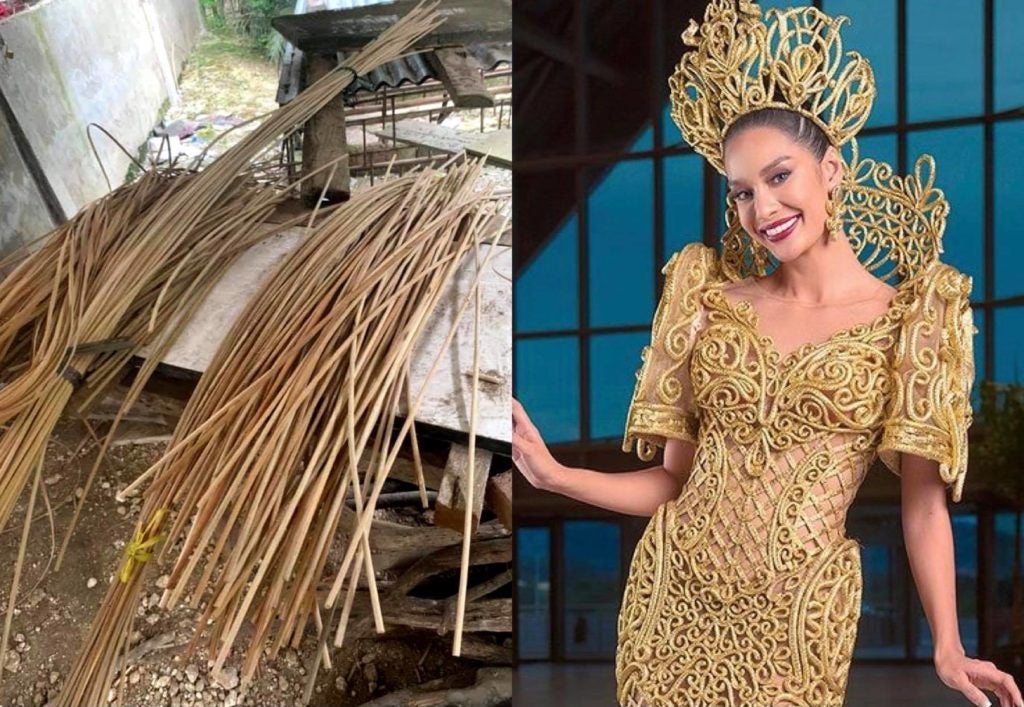 Queen maker and designer Malayka Yamas shared the materials used in the making of Aberasturi’s national costume in a Facebook post.

The yellow gold costume was made from rattan courtesy of the talented weavers of Sogod town, in northern Cebu.

Aberasturi can be seen in the pictures visiting the local weavers of the town.

This is also Steffi’s way of promoting local businesses in line with her advocacy and title as Cebu’s “Queendera” or Queen plus ‘tindera,’ a Cebuano word that means seller.

The costume honors the 500 years of Christianity in the Philippines by integrating the colors of the Sto Niño.

“As an advocate for empowering small businesses, my costume pays homage to a traditional Cebuano livelihood that’s been more profound during the pandemic – Rattan weaving.

During a trip to the north of Cebu, I, along with mother @malayka, had the chance to meet the rattan weavers of Sogod, whose stories of hope inspired me. A legacy of immense craftsmanship that’s been continued from generation to generation has been revived and given a modern take by the new generation of weavers. This represents how Cebuanos honor the past by using it to move forward, adapt, and innovate a better future.

The intricate costume celebrates the 500 years of Christianity in the Philippines by honoring the colors of one of the most well-known religious relics of the Philippines – The Señyor Sto Niño.

Ultimately, this costume represents how our hopes are woven and become strongly intertwined to hold all of us together – to keep looking forward to a brighter tomorrow,” Aberasturi shared on her Instagram.

The Cebuana queen will be representing the province of Cebu in this year’s Miss Universe Philippines pageant.     /rcg