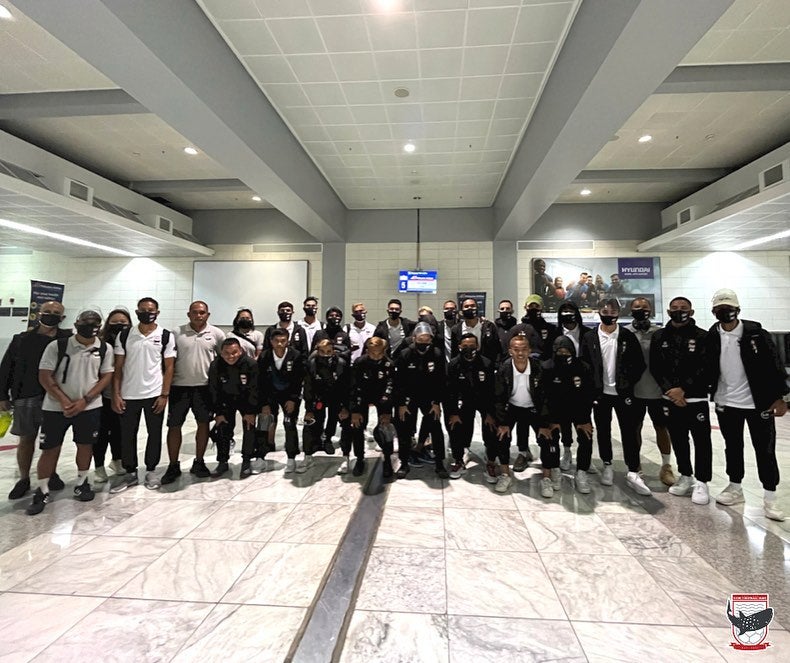 Dynamic Herb CFC’s players and coaches pose at the Ninoy Aquino International Airport’s domestic arrival area. The club is set to make their debut in the PFL on Nov. 10 in Carmona, Cavite. | Photo from CFC’s Facebook page.

Almost half of the entire CFC’s roster are composed of young and feisty booters who are very excited to make their pro debut and represent Cebu in the national league.

Since excitement fills the air on CFC’s locker room, Colina had some few reminders for his players.

“I always tell them that when I play, I don’t play with emotions. I play smart, you need to use your head,” said Colina.

“I need to motivate my players and I also tell them to focus (on) one game at a time,” he said.

The club already arrived in Carmona, Cavite yesterday with high hopes that their debut in the PFL would have a fruitful conclusion.

CFC is grouped with United City FC and Stallions Laguna FC in Group A while Kaya FC Iloilo, Azkals Developmental Team, and the Mendiola FC 1991 are under Group B.

Their first match will be against the Stallions Laguna on November 10, 2021, Wednesday at 7:30 PM.

“For me, all I want for my team is to play as hard as they can. I know they are all excited and I just want to let them know that I don’t expect too much of the outcome since it’s our debut, but I told them to give their best always,” added Colina.

Colina added that they would do their best to win matches and earn everyone’s respect in the PFL.

“Hopefully we have good results and win matches to earn respect from other clubs. Ultimately, we earn confidence that we can bring to next year’s season,” added Colina.

Read Next
Maya Bank to roll out this 2022