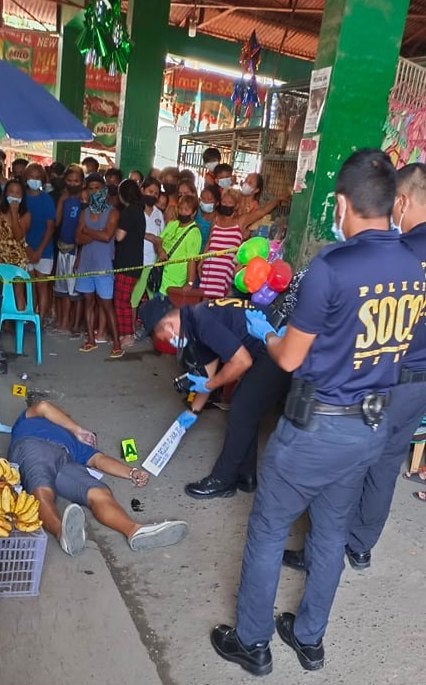 A 68-year-old man was gunned down by still unidentified suspect inside the Inayawan Public Market around 12:20 p.m. on Sunday, November 28, 2021. | contributed photo via Pegeen Maisie Sararana

CEBU CITY, Philippines — Police are investigating a cohort  of a drug personality, who was arrested recently, as a person of interest (POI) in the killing of a lay minister inside the Inayawan Public Market on Sunday noon, November 28.

Police Major Jose Angelo Acupinpin, chief of the Pardo Police Station, said that they were considering this POI because there was a possibility that he could have blamed his arrest on the victim, Danilo Bacalso, who had called the attention of the POI about his illegal drug activities.

(We received information that the victim prior to his shooting has called the attention of the drug personality in their sitio and had warned him that he would let him be arrested because of his illegal drug activities.)

Bacalso was shot dead by an unidentified gunman inside the Inayawan Public Market, a day after the POI was arrested during Saturday’s [November 27] Simultaneous Anti-Criminality Law Enforcement Operation (Sacleo).

(We arrested that drug personality on Saturday during our Sacleo, and one of the possible motives on the Sunday shooting was perhaps the group of this drug personality, whom we have arrested, retaliated and killed the victim because according to the family the victim had no enemies.)

Acupinpin said with the latest information they gathered, they were considering this possibility of retaliation from a drug group for the arrest of one of their members and for the victim being vocal against the group.

As for the POI, Acupinpin said that still finding evidence and getting statements from witnesses to help them build a case against this person if he was indeed the one who did it and file a murder complaint against him.

Acupinpin also said that the victim had been very vocal and open to the drug personality and calling his accomplice to stop their illegal activities or he would have them arrested.

The police chief, however, said that despite this development they were still also not discounting other motives in the crime.

He was referring to the earlier personal grudge motive that they were investigating as told by Police Corporal Jaymos Tordios, Pardo Police Station investigator, since the victim was allegedly heading to the family’s ancestral home to talk about the rent of a boarder there.

But Acupinpin said the victim was still heading to the ancestral house when he was shot dead and he had not yet spoken with the boarder.