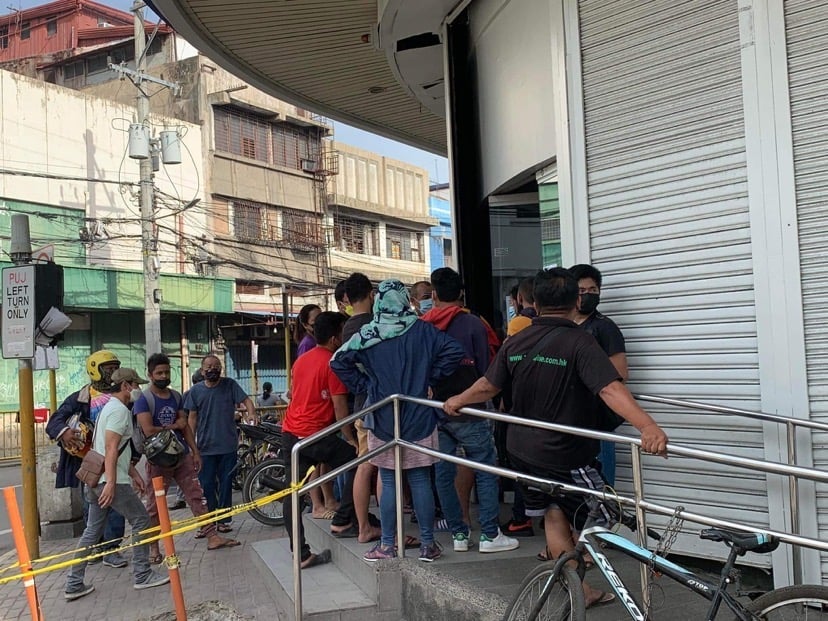 As early as 8 a.m. on Wednesday, December 22, 2021, people are already seen lining up in a bank in Magallanes Street, Cebu City in the hopes of making a transaction. CDN Digital photo | Delta Letigio

CEBU CITY, Philippines – The Cebu Provincial Government has offered to help banks here in addressing the long queues of people trying to withdraw cash from their accounts.

The Capitol on Tuesday, December 21, 2021, has extended an ‘order-now-pay-later’ arrangement in sourcing fuel for banking firms.

Governor Gwendolyn Garcia, together with Cebu City Mayor Michael Rama, met with bank representatives here to resolve the long queues in Automated Teller Machines (ATMs), which has been going on since Typhoon Odette ravaged the entire island on December 16.

A post from Sugbo News, the Capitol-ran media outlet, said Garcia will be providing diesel fuel to banks by placing their delivery order along with those of the provincial government.

“Delivery order can be placed along with the fuel needs of the Capitol and the banks can settle payment later,” portions of the report stated.

Bank managers will only have to send to the Capitol the total quantity of fuel they need, and its corresponding amount for all of their branches, in Cebu.

During the meeting, banks told Garcia and Rama that they needed at least 60 liters of fuel daily for their generator sets which, in turn, would power up their ATMs and to some extent, their entire establishment.

“According to bank representatives, they need to protect their generator sets from overheating. And as much as they would love to shut down their airconditioning units, they can’t because they cannot open their doors for security reasons,” said Sugbo News.

Long lines of individuals hoping to withdraw cash are still observed in most ATMs in Cebu, six days since Odette battered the island, knocking out power lines and disrupting water supply.

In Metro Cebu, only a few areas have been reenergized, especially those where critical establishments and institutions are situated like hospitals.

With no power, only a few ATMs are functioning.

Power suppliers and distributors vowed to restore most, if not all, areas in Cebu before Christmas Day, which will fall on Saturday, December 25.

Capitol to meet with banks to address long queues in ATMs