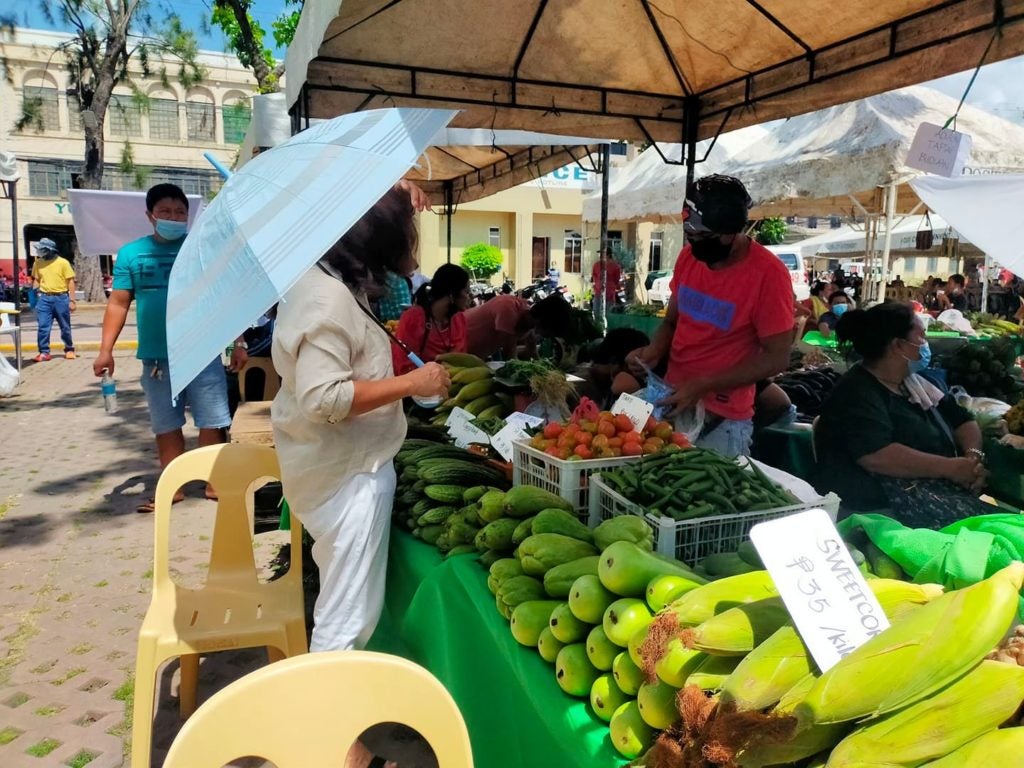 The Tugbong Tabo at the Plaza Sugbo in Cebu City, where produce of farmers from the city’s upland barangays are sold at a cheaper price. | Delta Dyrecka Letigio

CEBU CITY, Philippines — The weekly Tugbong Tabo at the Plaza Sugbo in Cebu City has returned after two years hiatus due to the pandemic.

The Tugbong Tabo is a weekly farmer’s market directly sourced from and sold by farmers in the city’s 28 farming barangays.

Engineer Joey Baclayon, head of the City Agriculture Office, said that the farmers had been clamoring to sell again at the Tabo since the city was placed under Alert Level 1.

(Today is the relaunching of our weekly Tugbong Tabo. Our farmers from the mountain barangays are participating in this activity. We have chosen farmers to sell here from the 28 upland barangays of the city.)

Baclayon said that the Tugbong Tabo will be held at the Plaza Sugbo every Thursdays and Fridays, giving the farmers a chance to take advantage of the pre-weekend rush of people at the Basilica Minore del Sto. Niño.

The farmers, who are part of the Tugbong Tabo Vendors Association, will be given a chance to sell alternately each week.

(We also don’t want them to just keep on selling. They will go back [to the upland barangays] to farm.)

The program is conducted to give farmers a chance to sell their own goods without going through middlemen at the Carbon Market or other markets.

The profit will be solely theirs and they can sell their goods at a competitive and even cheaper than Carbon price.

Baclayon said that to help the vendors, participants of a week’s Tugbong Tabo could avail of the city’s free transportation for their goods.

(We will pick them up in the mountain barangays. Others, who have the capacity to bring their produce, can transport their produce. We are intentionally doing that so that the produce that they sell can be cheaper, 5 to 10 pesos cheaper than at Carbon market.)

Some farmers are also selling delicacies and refreshment for the shoppers such as corn on a cob and coconut juice.

Ornamental plants are also sold in the Tabo, but vendors of ornamental planst can sell all week as compared to the farmers who can only sell on Thursdays and Fridays.

The reason for which is because ornamental plants are grown in pots and not farmed in the mountains.

Baclayon said the Tabo was just one of the assistance the city was giving the farmers as some sort of a jumpstart for them now that the economy had reopened.

The city has also provided seedlings, fertilizers, and insurance services to the farmers especially after Typhoon Odette.

Read Next
Cebu-based company advances in the construction industry