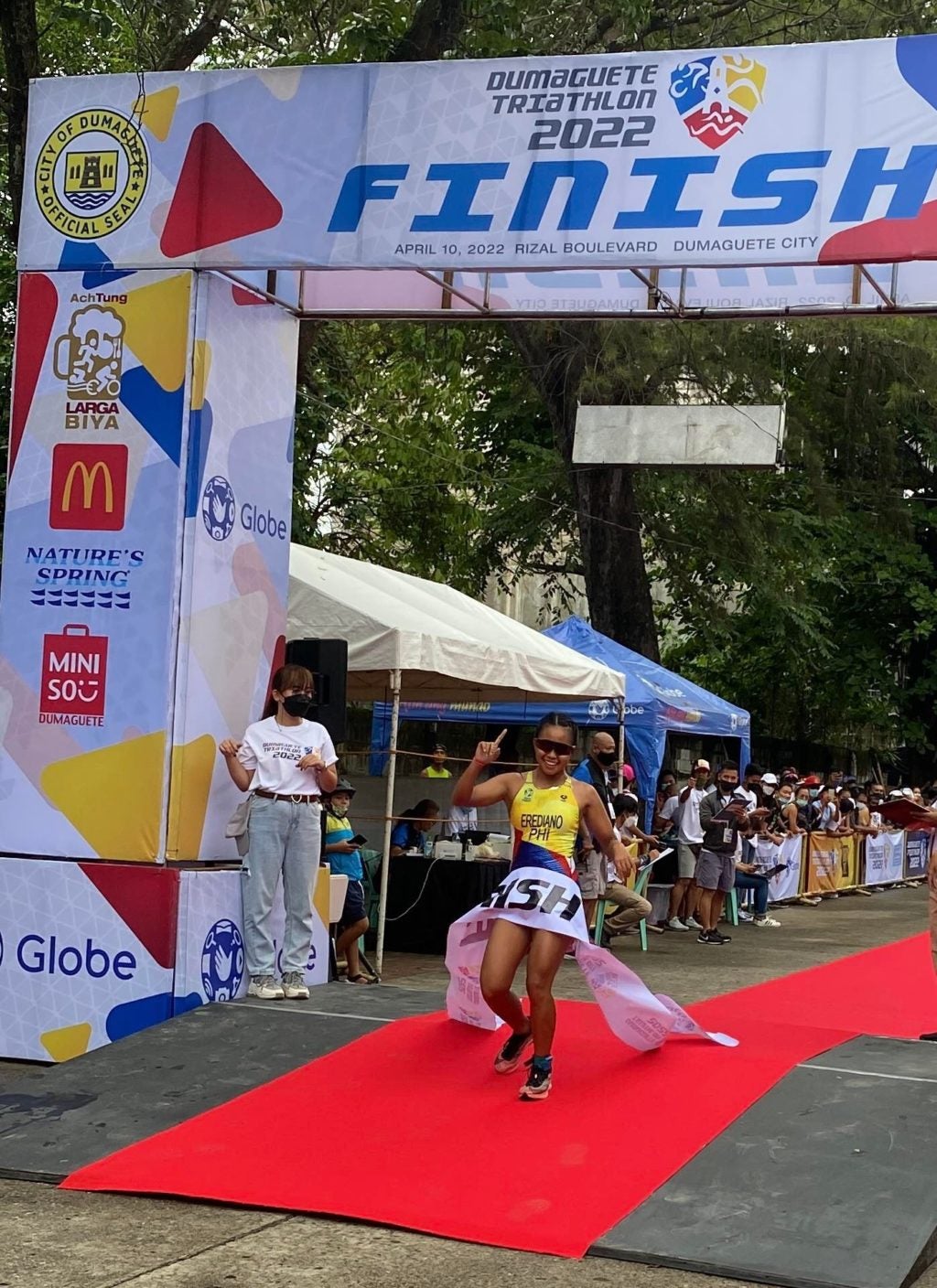 Erediano, a former Alaska Ironkids champion who competes under the Talisay Luigi Triathlon Team- Go For Gold (TLTG-Go for Gold), finished the race at 2 hours, 15 minutes and 14 seconds.

The race, which featured a 1.5-kilometer swim, 40k bike, and 10k run, went on despite the Visayas being under Signal #1 due to Tropical Depression Agaton.

“I am very happy to win today. I was almost three minutes behind in the swim, but I did not lose my focus. I pushed myself to bike faster and eventually I had overtaken the bike lead and finish first on the bike. It was surreal leading the bike and run but I am so thankful I won,” said Erediano.

Considering the weather condition, Erediano revealed that the swim portion of the race was the most difficult.

Fellow Cebuana Karen Manayon trailed Erediano at second place with the time of 2:17.23 while Ines Santiago rounded off the top three female overall finishers at 2:27.18.

“Swim was the hardest. There were more than 500 swimmers who swam at the same time. But the organizers made sure that the race was as safe as it could be,” said Erediano who competed for the second time since the onset of the COVID-19 pandemic in 2020. 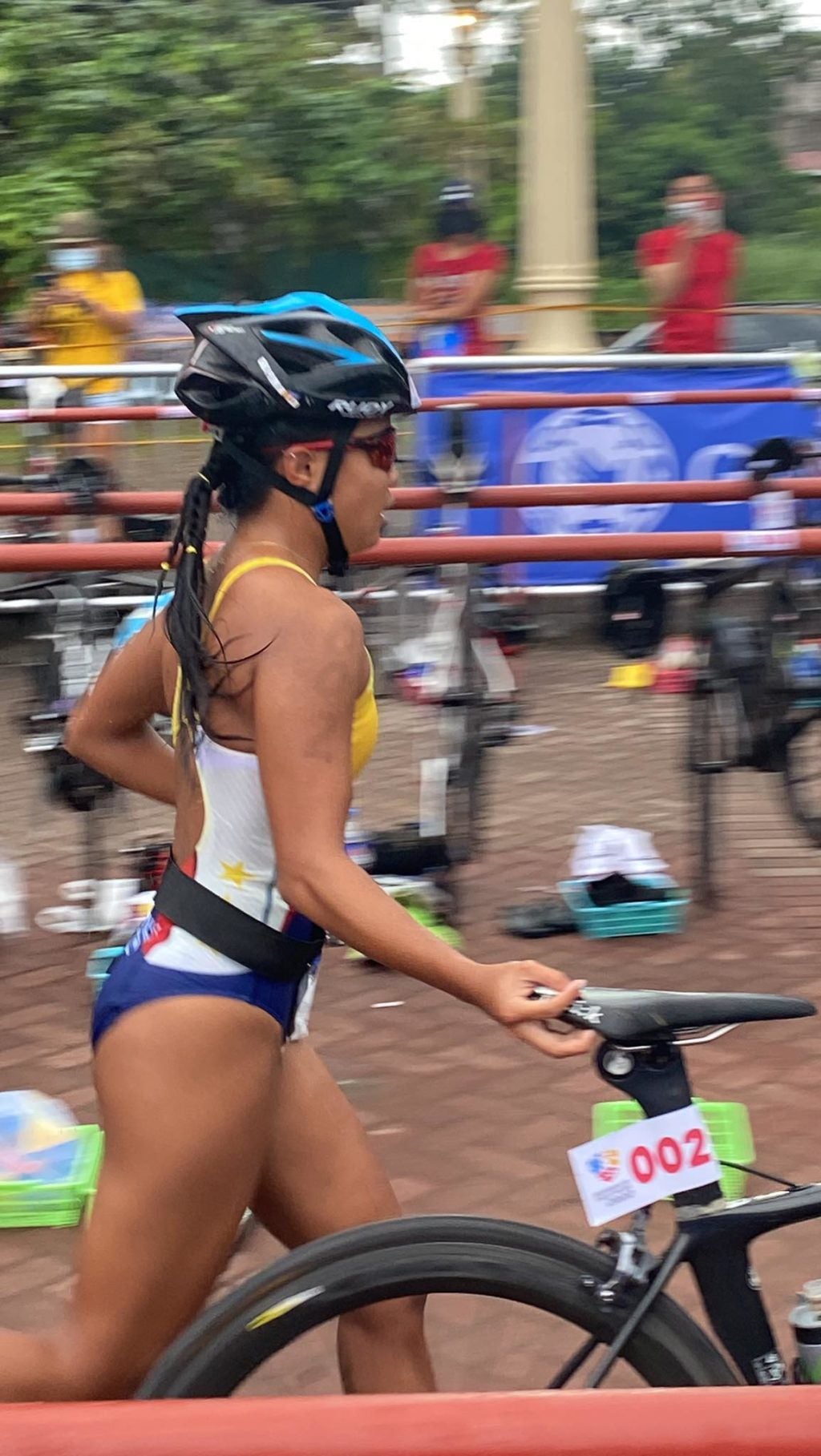 “This is my second standard triathlon race this year and I finished 5th in NAGT Subic and now champion. Racing and training are very difficult during the pandemic. I had to transfer residence to keep up the training while studying so that I can prepare for races,”

She also revealed that she needs to balance her training and study under the watchful eyes of renowned triathlon coach Andoy Remolino. Erediano said that she trains the entire week.

“Our group needs to train daily under the supervision of coach Andoy and we have to train very early so that we can still make it to our first subject in the morning and train again in the afternoon after school and during weekends,” said Erediano.

On the other hand, Iñaki Emil Lorbes topped the male overall at 2:02.59 while Erediano’s teammate Renz Wynn Corbin grabbed the second place with the time of 2:06.09, and fellow Cebuano Emmanuel Comendador finishing at third with the time of 2:08.48.

Other Cebuanos who shone during the race were Kristiane Lim who emerged as the champion in the male 35-39 years old and Cianyl Gonzales in the female 25-29.

Erediano revealed that her next major race is the Subic International Triathlon (Subit) on May 1 and the Junior Sprint Triathlon Championship in Korea in June. She is planning to compete in all duathlon races and triathlon races this year that are sanctioned by the Triathlon Association of the Philippines (TRAP).

Ironman 70.3 to be held in Puerto Princesa this November

Read Next
No work, classes in Cebu City on Apr. 11 due to #AgatonPH