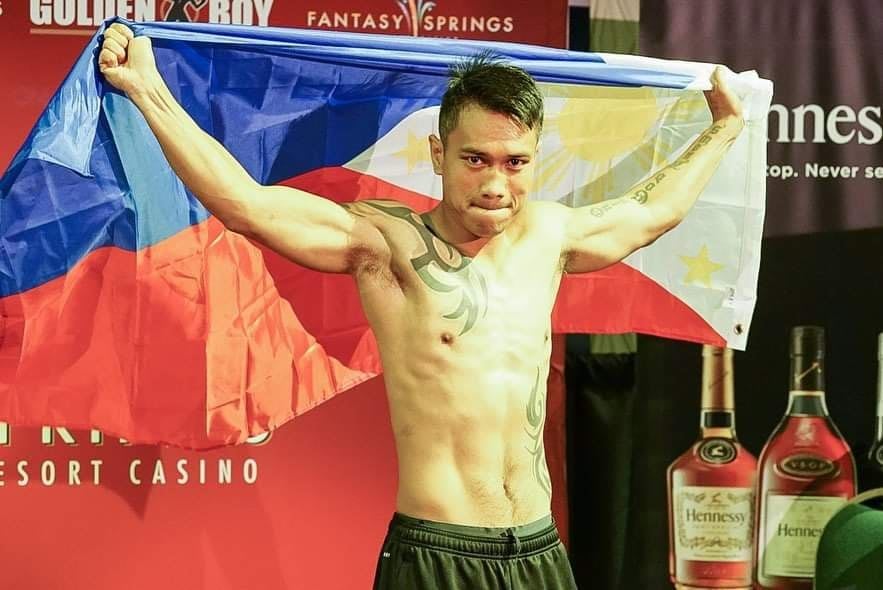 Mercito Gesta during the weigh-in for his bout against Joel Diaz Jr. | Photo from Gesta’s Facebook page

CEBU CITY, Philippines — San Remigio’s pride, Mercito “No Mercy” Gesta, ended his two-year hiatus with a huge victory against the younger Joel Diaz Jr. of the United states via unanimous decision in their 10-rounder showdown at the Fantasy Springs Casino in Indio, California on Thursday, April 22, (April 23, Manila Time).

The two-time world title challenger Gesta, who is based in San Diego, California, got the favor of the three judges. Judge Damian Walton and Carla Caiz both scored, 96-92, while Fernando Villareal saw the bout, 95-93, all in favor of the 34-year-old Cebuano ring warrior.

Gesta shook off ring rust by impressively knocking down the 30-year-old Diaz twice to earn the unanimous decision victory, and grab his first victory after his subpar performance in 2019 where he had a technical draw with Carlos Morales, and a loss to Juan Antonio Rodriguez.

Gesta, who is known for his technical style and defensive prowess, surprised everyone by being the more aggressive between him and Diaz from the opening bell to the final round.

He didn’t think twice in engaging Diaz, who has the better knockout record than him, flooring the latter twice in the opening round.

Gesta hit Diaz with a left straight to score the first knockdown and less than a minute from that, he floored the latter again, after getting tagged with a combination.

The Mexican-American Diaz was forced to up his guard throughout the fight which was unusual for a boxer who was known for his aggressive and toe-to-toe style.

Gesta piled up points by landing his left straights timely. Diaz had his fair share of good moments by boxing Gesta from the distance in the middle rounds.

Diaz suffered a deep cut in the fifth round due to an accidental headbutt. Sensing desperation, Diaz upped his tempo, but Gesta found his rhythm back in the last three rounds and landed telling blows, forcing Diaz to go in defensive mode.

The victory improved Gesta’s record to 33 wins with 3 defeats, 3 losses with 17 knockouts. Diaz absorbed his 3rd defeat with 26 wins and 22 knockouts.