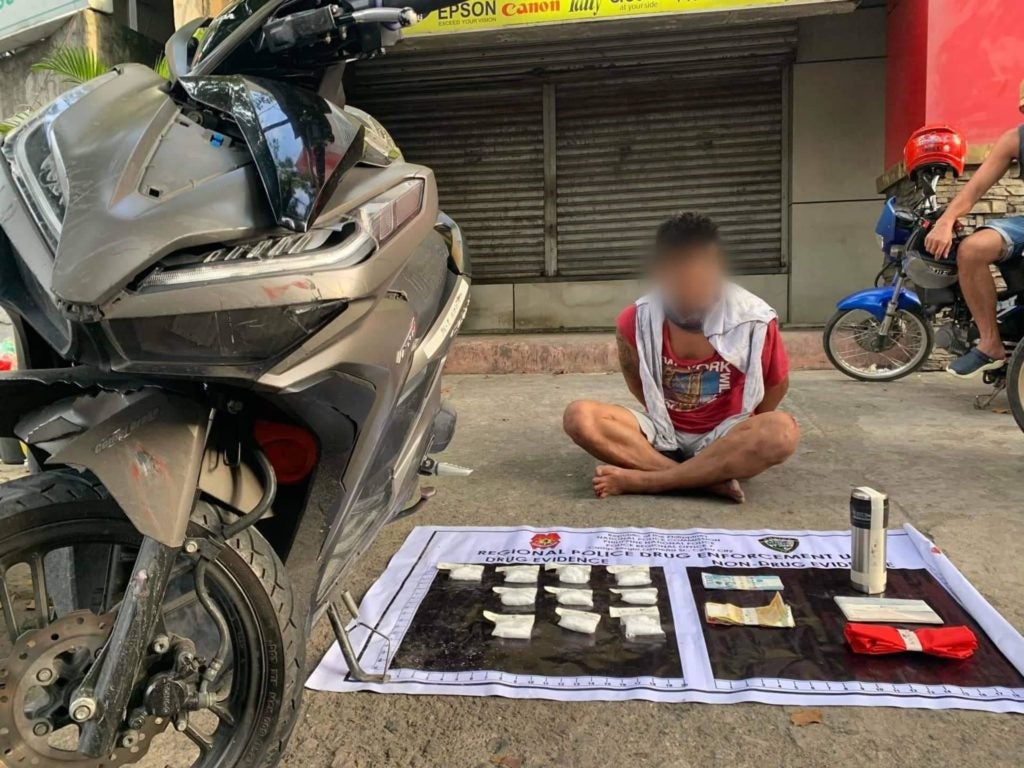 Renevick Jao, a former habal-habal driver or motorcycle-for-hire driver is caught with P1.7 million worth of suspected shabu during a Barangay Carreta buy-bust operation on Sunday, May 29. | Pegeen Maisie Sararaña

The police in their patrol cars caught up with the habal-habal driver after his motorcycle hit a taxicab and crashed into another vehicle along General Maxilom Avenue, which was estimated to be at least 2 kilometers away from Barangay Carreta, the place where the buy-bust operation was conducted.

Renevick Jao of Capitol Site, Cebu City was caught with 250 grams of suspected shabu, which had a market value of P1.7 million, said the policemen of the Regional Police Drug Enforcement Unit in Central Visayas (RPDEU-7), who conducted the operation.

Jao was slightly injured in the crash and so was his backrider, the undercover policeman who could not get off the motorcycle because the transaction was being done while they were cruising along Barangay Carreta.

RDEU-7 policemen, who asked not to be named, told CDN Digital that when Jao learned that he was transacting with a policeman, he increased his speed and sped off from Barangay Carreta heading to General Maxilom Avenue.

They said that the undercover policeman did not force him to stop the speeding motorcycle, fearing that they might crash, when he would try to forcefully take control of the motorcycle.

Despite the undercover policeman’s decision not to force Jao to stop the motorcycle, they eventually hit a taxicab along General Maxilom Avenue causing Jao to lose control of the motorcycle and crashing into another vehicle, a Toyota Vios.

Both Jao and the policemen were thrown off the motorcycle.

Fortunately, Jao only sustained a cut in the head and cuts and bruises on his legs.

The undercover policeman also suffered cuts and bruises on his legs.

RDEU-7 policemen said that they conducted the operation against Jao after they received information about his illegal drug trade.

The policemen said that Jao would allegedly transact or allegedly sell drugs while driving his motorcycle with the buyer riding as his backrider and cruising along the streets as the transaction would go down.

In an interview, Jao told reporters that he had allegedly been in the illegal drugs business for two months now and that this was after he stopped working as a “habal-habal” driver.

He claimed that he was not selling illegal drugs but he was only delivering them.

He alleged that he was paid P2,500 per delivery of the illegal items.

He also said that he did not know who he was transacting with and that he only had their contact numbers.

He also claimed that he only delivered items in Barangay Busay.

Jao also admitted that he had been using shabu for two years and reiterated that he was not selling illegal drugs but only delivering them to customers.

Jao was detained at the RDEU-7 detention cell pending the filing of charges.

Gov’t: 16 killed in drugs operations in 1st quarter this year