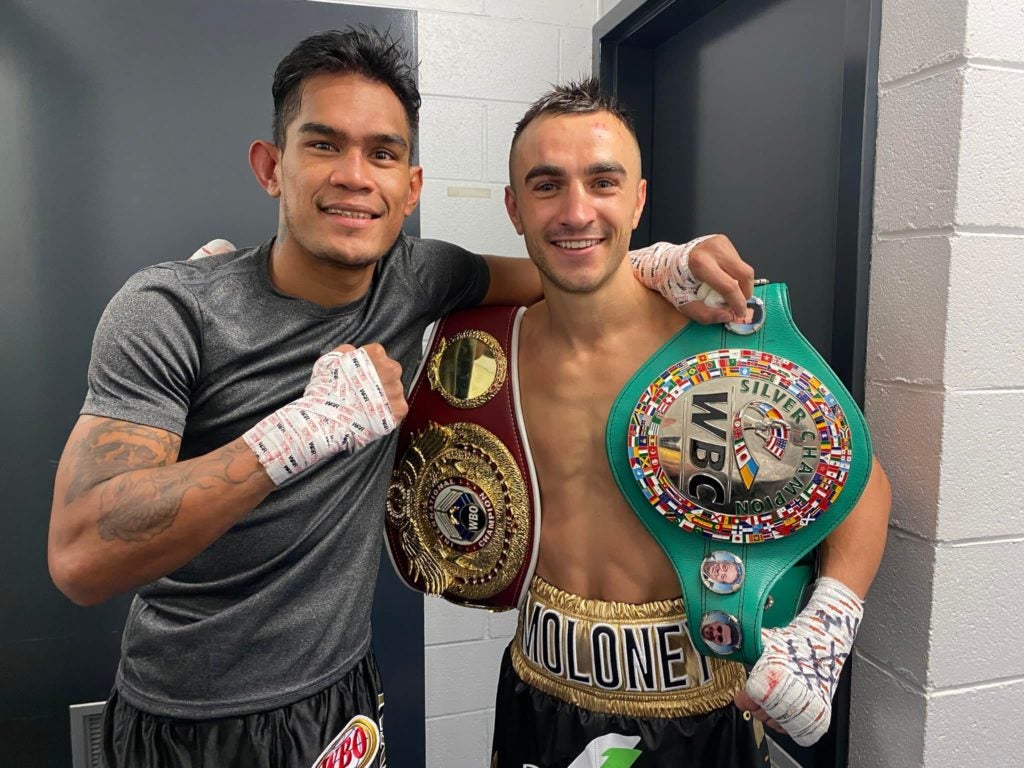 Aston Palicte (left) and Jason Moloney (right) pose for a photo after their bout in Melbourne, Australia. | Photo from Palicte’s Facebook page

The 31-year-old Palicte suffered a third-round technical knockout against Moloney for the World Boxing Council (WBC) silver bantamweight and World Boxing Organization (WBO) international bantamweight titles in the undercard of Haney-Kambosos undercard at the Marvel Stadium in Melbourne, Australia.

In his Facebook post, a few hours after his fight, Palicte thanked all of the Filipino boxing fans who prayed and supported him in the fight.

Palicte even gamely posed with a photo with Moloney in the dug-out after their bout to display sportsmanship.

“Thank you to all Filipinos who supported and prayed for us. Hands down to my team despite all the challenges. Thank you to my manager Jason Soong, Coach Nonoy Neri, and Ryan Songalia my best man during this fight. 3 Filipinos amongst 50k people in Marvel Stadium. Thank God at safe lang po lahat sa laban. Respect to Jason Moloney and his team. To God be the Glory,” said Palicte.

Moloney made easy work in defeating Palicte by knocking down the former twice and finished off the latter at 2:35 mark of the third round. Despite the knockout loss, Palicte managed to connect numerous good shots, but in the middle of the third round, a thunderous right hook knocked the Filipino down to his back on the canvas.

With wobbly feet from the knockdown, Palicte immediately got back up to beat the referee’s count, but Moloney went for the kill, unleashing a series of combinations that knocked the former anew.

That time, the referee Ignatius Missailidis have seen enough, and stopped the bout, awarding Moloney the TKO victory.

The victory improved the Aussie former world title challenger’s record to 24 wins with 19 knockouts and two defeats. He also extended his winning streak to three fights after losing to Naoya Inoue in 2020.

Palicte suffered his 5th defeat with 28 wins, 23 knockouts, and 1 draw.

Read Next
Man, who turned to stealing bicycles to pay off his gambling debts, lands in Talisay jail