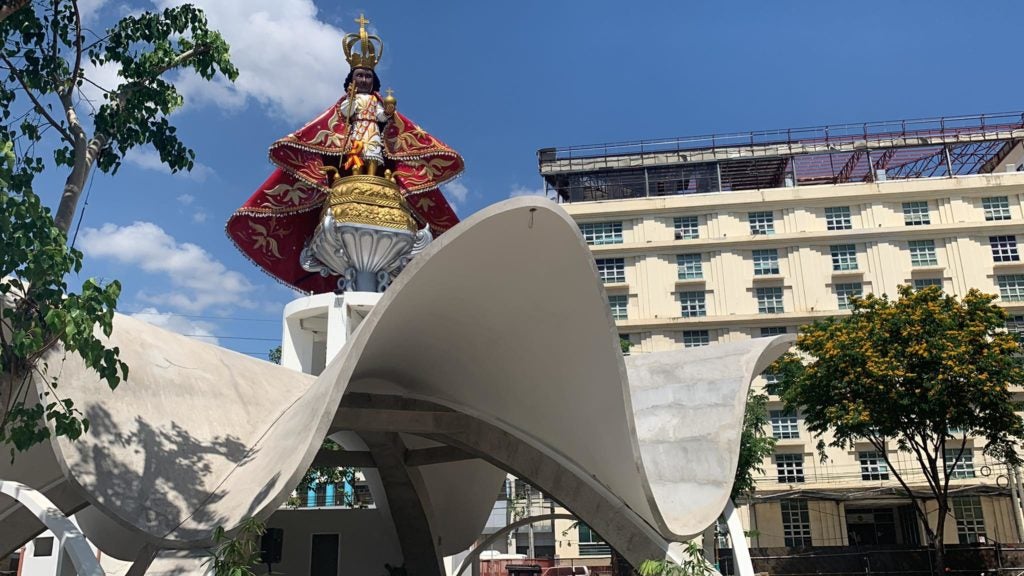 STANDING GUARD. A giant image of the Holy Child facing the Mactan Channel as if guarding Cebu City from marauding invaders is the main feature of the Senior Citizens Park Chapel which was opened to the public. | Delta Dyrecka Letigio

CEBU CITY, Philippines — Rising from downtown Cebu City is the grandest image of Holy Child Jesus that Cebu has ever seen, a 30-foot Sto. Niño standing on top of a chapel designed to resemble the waves of the sea.

Since it opened in January 2022, the Sto. Niño Chapel is now an iconic figure in Cebu City greeting the transients arriving in the ports or through the South Road Properties (SRP) and most recently, the Cebu Cordova Link Expressway (CCLEX).

It stands in the middle of the Senior Citizen Park which used to be a simple public space easily ignored by passersby. Now, it is simply impossible not to look up to the glory of the Señor Sto. Niño.

The chapel was designed by Megawide Construction Corp. and was part of the original proposal for the redevelopment of the Carbon Market that eventually led to a Joint Venture Agreement (JVA) between the Cebu City government and the company.

Lydwena Eco, deputy manager of Megawide-subsidiary Cebu2World, said that the it had always been an integral part of the redevelopment plan to build a Sto. Niño Chapel that would be part of the bigger Carbon Market complex.

Brought by the waves

Of the entire P8 billion project, the Sto. Niño Chapel was among the first edifices completed in the multi-phased plan. It was the company’s commitment to the city to complete the structure in time for Sinulog 2022.

“I am also a Cebuano, I am proud of this particular development, has always been as part of the masterplan of the Carbon redevelopment project,” said Eco.

She said the design itself was made to resemble the wave pattern of the Mactan Cebu International Airport Terminal 2, which Megawide also redeveloped in partnership with the government. The design of waves has become the symbol of Cebu, which in native tongue is translated to Sugbo or the movement of waves.

“The plan was to do it in a very unique design. The concept, overall is really Megawide. You look at archways, it’s similar to the airport. It’s depicting what is truly Cebu which is the wave,” said Eco.

The 30-foot Sto. Niño faces the Mactan Channel in direct line to the Nuestra Señora de Regla of Lapu-Lapu, a detail that was agreed upon by Megawide and the Archdiocese of Cebu as this allows ” the Son to pay homage the Mother.”

By doing so, the Sto. Niño also welcomes the arriving passengers from the ports of Cebu City, an iconic landmark that transients can look forward to upon their arrival.

Eco said that the entire 30-foot statue was shipped from Manila to Cebu on December 14, 2021. The goal was to put up the statue before the New Year to be a symbol of prosperity.

By then, the construction of the chapel already took five months.  However, on December 16, 2021, Typhoon Odette hit Cebu and ravaged the city into an unrecognizable state.

(So Odette happened, December 16. The crew who assembled the Sto. Niño was trapped here in Cebu. Many were destroyed then, we also sustained damages. There was a delay in putting it up. That’s why when we finally opened the chapel, it was a very emotional moment.)

Putting up the Sto. Niño at the time when the entire city had no access to basic utilities such as water and electricity, Megawide pushed through with the installation using generator sets as power.

The 10-man crew stayed in Cebu to complete the task despite the difficulties, and Eco said without their persistence, the Sto. Niño Chapel would not have been completed in time for Sinulog 2022.

Instead of being a symbol of prosperity for the new year, the giant Sto. Niño became a symbol of hope to a ravaged city in a desperate time.

A place of families

Now, the Sto. Niño Chapel holds Masses every Sunday and the park has been further developed to have food stalls and benches for the public to sit on.

The chapel itself is only 300 square meters in the middle of a 3,700 square-meter park. It can seat up to a hundred churchgoers, have a spacious altar, and is also equipped with comfort rooms for men, women, and other genders.

Eco said that one of the goals of the park was to provide a comfortable area for people to stay in especially for senior citizens who would enjoy taking in the fresh air. Sto. Niño Chapel stands in the middle of the Senior Citizen Park, which serves as a place for families. | CDN File Photo

The place also provides clean and well-maintained comfort rooms (CR) for everyone to aid in public sanitation.

“It really warms my heart, Sundays and Saturdays, makakita kog mga seniors and ilang kuyog nga magpush og wheelchair . I see students with laptops sitting by the park. That is really what we wanted to achieve,” said Eco.

(It really warms my heart, Sundays and Saturday, we can see seniors and those accompanying them pushing their wheelchair. I see students with laptops sitting by the park. This is really what we wanted to achieve.)

There is a regular Sunday Mass held at the chapel for the churchgoers as well, and this has helped Carbon Market vendors, who wish to attend church but are hesitant of going too far from their stalls.

A senior citizen, who asked for anonymity, told CDN Digital that he enjoyed the Senior Citizen Park now with the Sto. Niño Chapel because it was well-maintained and there were food stalls to enjoy.

(At first, this was just an area where I can pass through, but now it has become a wonderful area. You can pray here, you can also eat. It is now so enjoyable to be here.)

In the sculpting of the Sto. Niño, Megawide worked closely with the Archdiocese of Cebu to perfect the statue and with respect to the blessed image.

Eco said that the 30-foot Sto. Niño was a giant replica of the Sto. Niño that could be seen at the middle of the MCIA Terminal 2. It was an image that was given to the terminal by the Archdiocese of Cebu. A colorized picture of the Sto. Niño de Malitbog before it was lost in the late 1980s.

During the time of its opening until the present, multiple enhancements were made on the face and other parts of the giant statue to make it resemble more the Sto. Niño that Cebuanos have known and adored.

Knowing that Cebu City plans for a grand comeback of the physical Sinulog on January 2023, Megawide is already preparing that the Sto. Niño chapel will be part of the highlight being the biggest offering of Cebuanos to Holy Child Jesus.

While the Sto. Niño Chapel was just the first of the many changes in the Carbon Complex, Eco said that it would also be by far one of the most important.

The chapel and the park was a symbol of Megawide’s commitment to Cebu City as it was not an income-generating development for them, but simply a thanksgiving to the Sto. Niño and the Cebuanos.

Furthermore, the giant Sto. Niño is also a symbol of hope to Cebu that it can and will rise up no matter the adversities it will face in the future.

Planning to go to Cebu City? Here’s what you need…