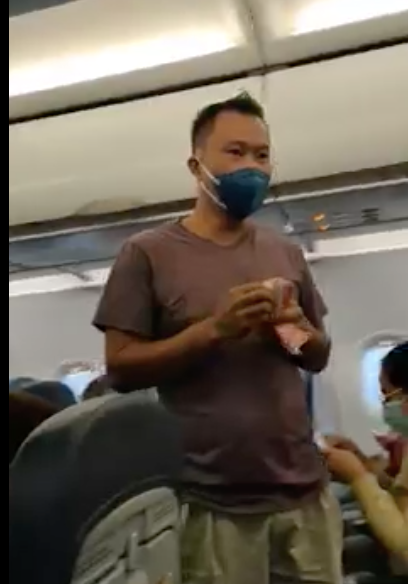 Renogen Selle gives passengers of a commercial flight a good laugh as he pretends to be a conductor collecting fare from them. | screenshot of Ronil Ray Galo’s video

CEBU CITY, Philippines—On an ordinary Friday morning on August 5, 2022, Renogen Selle took out his bills and started reminding passengers to pay their fare.

Renogen, however, was not inside a public utility jeepney (PUJ). The Compostela, Cebu resident was inside a commercial aircraft bound for Davao.

Renogen’s stunt gave the passengers of the flight a good laugh.

A video of Renogen pretending to be a jeepney conductor went viral on social media.

Ronil Ray Galo, the person who took the video and Renogen’s  cousin-in-law, told CDN Digital that the scene was not even scripted.

Galo said they decided to give the flight a bit of fun to ease some passengers’ nerves of flying.

(We were just thinking about fooling around. For my part, I pretended to be selling peanuts and bottled water on the flight. My cousin nailed it when he stood and pretended to be a jeepney conductor.)

The family was bound for Davao at that time to visit some of their relatives there, said Galo.

Galo’s video eventually went viral, hitting as much as 51,000 reactions on Facebook and shared over 49,000 times.

Galo said they did not expect the video to go viral but they were glad they shared some fun and memorable moments with their fellow passengers.

Read Next
Capitol intervenes: No more illegal cottages in Cordova