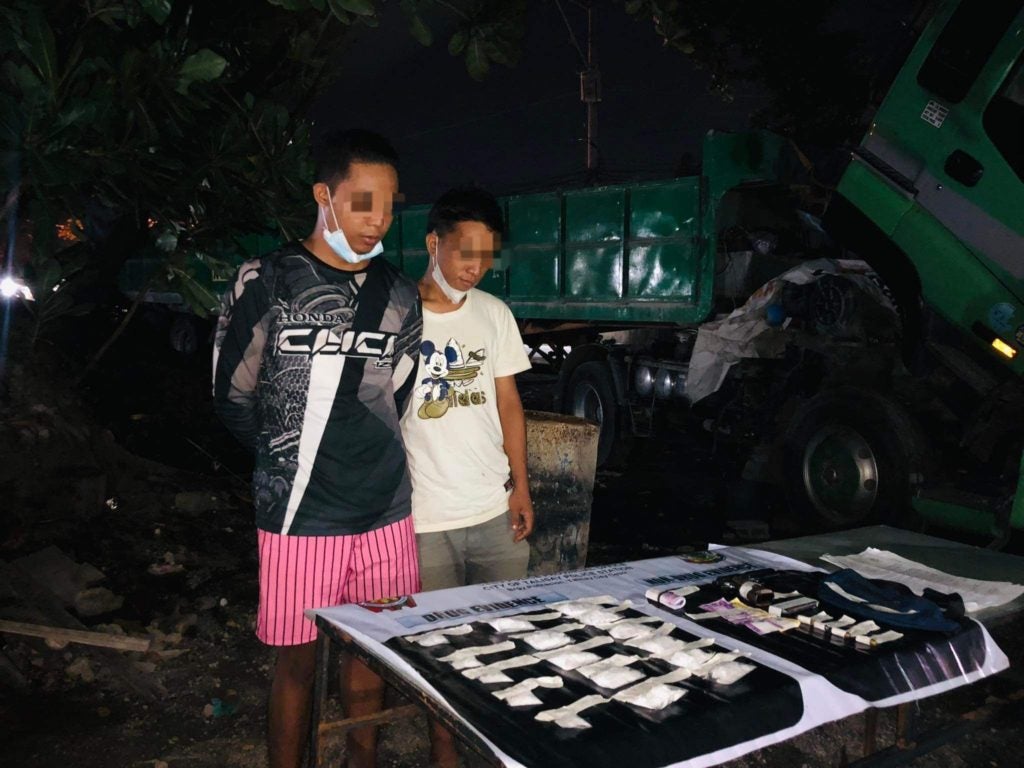 Two Cebu City residents were arrested with P2 million worth of suspected shabu during a buy-bust operation in Sitio Manga, Barangay Dumlog in Talisay City at around 9 p.m. on Friday, September 9, 2022.| Photo courtesy of the Talisay City Police Station

CEBU CITY, Philippines — They easily earn at least P10, 000 for every delivery that they make.

But they lost the opportunity to earn more after John Ian Amigable, 22, and Jonathan Alcober Alas-as, 25, were arrested in a buy-bust operation in Barangay Dumlog, Talisay City Friday night, September 9.

And both of them will be serving jail time for their offense.

Police Lieutenant Colonel Randy Caballes, chief of Talisay City Police Station, said they recovered suspected shabu worth P2 million from the suspects.  They also confiscated a .45 caliber pistol from Alas-as’ possession during the operation, which happened at about 9 p.m. in Sitio Manga in Barangay Dumlog.

Caballes said charges for the violation of the Dangerous Drugs Act of 2002 will be filed against the suspects on Monday. An additional complaint for the illegal possession of an unlicensed firearm will also be slapped on Alas-as.

Based on their investigation, Caballes said, they learned that Amigable works as a “bodegero” for an inmate known as ‘Taitus,’ who is now detained at the Cebu City Jail in Barangay Kalunasan.  Alas-as works with Amigable as he is tasked to hand over shabu to their customers.

The suspects, according to Caballes, are able to allegedly dispose of 300 to 500 grams of shabu per week to buyers in Metro Cebu.

The men told the police that hey have not met the supplier of the shabu that they are tasked to deliver.

They claimed that they are only called on the phone to send a delivery for a fee of P10, 000 which they would equally split.

In an interview with the media, Amigable said, he was forced to sell illegal drugs because of his need to raise cash to take care of the hospital bills of his child.

During their background check, Caballes said, they learned that Amigable was also arrested in March 2019 for a drug-related offense. He was released from jail in May 2022 after he agreed to plea bargain.

Alas-as, on the other hand, was also arrested in April 2022 for robbery. He was released in May after his case was dismissed.

Both suspects are currently detained at the detention facility of the Talisay City Police Station.

Man caught with drugs hidden in underwear in Cebu airport