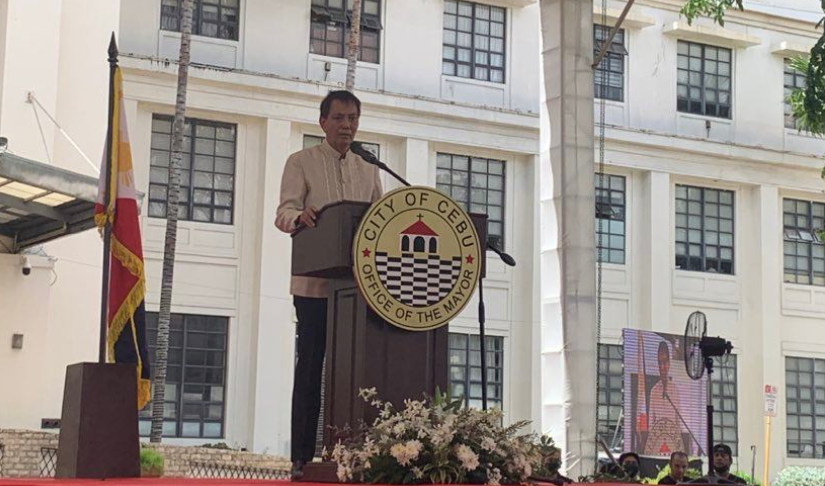 Cebu City Mayor Michael Rama delivers his report card during a ceremony for his first 100 days in office at Plaza Sugbo on Monday, October 3, 2022.| Wenilyn B. Sabalo

CEBU CITY, Philippines — While Cebu City Mayor Michael Rama announced, on Monday, Oct. 3, 2022, that regular and casual employees of city hall would receive a Christmas bonus, he also urged city hall employees not to overreact on speculations that the city government would not renew job contracts of thousands of casual and job order (JO) employees.

(In the cutting of jobs (of employees), I still need to know because there is a non-renewal. As what we always say, those who fear getting cut are those who steal. They concluded first and they did not react in the wrong way. I will still look at it, my people already know that.)

“I need to get the copy pa (of the list of the employees’ names) kay naa koy nakit-an nga I wish to do some ratification. I always believe on due process of law,” he added.

(I still need to get a copy (of the list of employees’ names) because I saw something that I wish to do some ratification. I always believe on due process of law.)

Rama, earlier, announced that his administration would reduce the city hall’s workforce following his plan to rightsize city hall. He also did not renew the contracts of some 500 casual and JO employees last June after failing the evaluation.

To recall, Rama issued last May Memorandum No. 226-05-2022, as he intensified his campaign on cleansing City Hall from scalawags.

The memorandum covered those co-terminous, JOs, and casual employees at the city hall. Included in the employees’ evaluation is for them to prove that they are not ‘kawatan, tapulan, hugawan, intregero/intregera, pala-away, way nahibaw-an, dili mobayad og utang, and mo buko-buko’ (thiefs, lazy people, dirty people, people who sow intrigues, people who always fight others, people who don’t know anything, people who don’t pay their loans, and people who stab you in the back.)

READ: Rama scales up campaign vs. scalawags in City Hall

Rama, however, said the city had a program for those who would not be renewed.

(That is already a built-in thing, that whoever whose contracts would not eventually be renewed, even if he is a thief, in reality, we give them a chance, but not here in city hall.)

Meanwhile, the mayor also assured regular and casual city hall employees of the Christmas bonus they will be receiving in Decembers.

City hall currently has a total of 1,372 regular employees.

“My mayorship has always been no record that there will be no bonus. There will be bonus this coming December, but I cannot have that without the Sanggunian’s approval, but I know the stewardship of (Vice Mayor) Raymond Alvin Garcia,” he said.