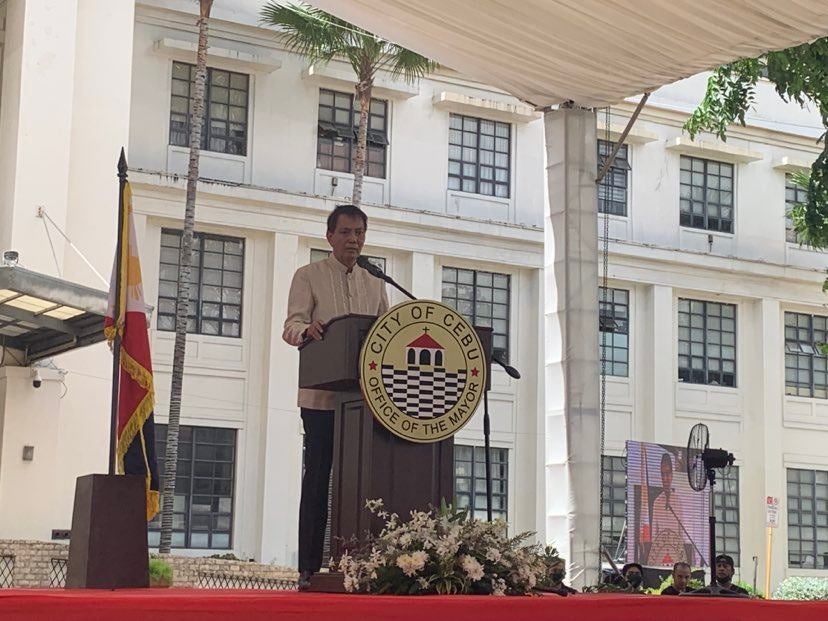 Cebu City Mayor Michael Rama made a report on his accomplishments in his first 100 days in office in a ceremony held at the Plaza Sugbo on Monday, October 3, 2022.| Wenilyn B. Sabalo

Rama gave a brief on the things he had accomplished in his first 100 days in office as he presented his report card to Cebuanos in a program held this Monday morning, Oct. 3, at the Plaza Sugbo.

First on the list is the full payment of the city’s South Road Properties (SRP) loan last August 2022, which freed the city from debt.

Another major item the mayor ticked off of his 21-gun salute list is the amendment last July of the Joint Venture Agreement with the Megawide Construction Corp., the private entity behind the Carbon redevelopment.

And the recently concluded Mobility Summit and the series of investment marketing and commitments the mayor secured with various business tycoons in the country—all for the city’s quest to become “Singapore-like” in terms of progress and cleanliness.

Rama began his 21-gun salute projects after he took over as mayor in 2021, particularly in November of last year when then Cebu City Mayor Edgardo Labella passed away.

He said that the 21-gun salute projects were his “lasting” tribute to the late former Mayor Labella.

Rama, during his speech on Monday, also said that he would want to meet with Reps. Eduardo Rama of the South District and Rachel Del Mar of the North District to ensure that their initiatives would be in line with the goals of the city government.

“I would like to sit down with all of them and let them know that they are part of the Singapore-like Cebu City. Ayaw mo pataka og butang og mga projects nga mag-away ang Sanggunian. Masuko ang Mayor. We must be working as one, synergizing as one,” Rama said.

(I would like to sit down with all of them and let them know that they are part of the Singapore-like Cebu City. Don’t carelessly place projects that the City Council will fight over. The mayor would get angry with that. We must be working as one, synergizing as one.)

Aside from being mayor, Rama has also been elected as the president of the League of Cities of the Philippines and the Vice President for the Visayas of the PDP-Laban party.

During his first 100-days in office, Rama implemented various measures to address the city’s lack of funds when he assumed office on July 1.

These included the creation of a fiscal task force to look into the possibility of increasing especially the city’s real property taxes (RPT), business taxes, fees, and other levies to raise the city’s badly needed cash and revenue to ensure that the city’s services will continue.

Rama, in his first weeks in office, also shared his plans, and now ongoing efforts, to substantially reduce human force at the various departments and offices at City Hall.

The city’s lack of cash in July prompted Rama and his working force to carry out three rounds of investment marketing in Metro Manila.

Through a public-private partnership, Rama secured funding commitments for the accomplishment of the Cebu City Medical Center and the undertaking of the city’s socialized housing to build two medium-rise buildings (MRBs) for those affected by the clearing of the river’s three-meter easement.

The three rounds of investment “begging” Rama made also yielded an offer from business tycoon Enrique Razon Jr. of Manila Water to build a dam in the uplands of Cebu City in less than three years.

Within his first 100 days, the mayor also launched his “Gubat sa Baha” campaign in a bid to address the city’s perennial problem on flooding.

The campaign has so far paved the way for the marking of 3,000 encroaching structures, subject for clearing and demolition.

Rama also asked Roy Cimatu, a former secretary of the Department of Environment and Natural Resources (DENR), for assistance in the city’s quest to resolve its flooding issue.

Cimatu led the clearing of the fence at Pier Tres that allowed the excavation of the delta of the Lahug-Kamputhaw-Tejero River. The city government also undertook a more massive cleanup of waterways and its seafront last Sept. 17.

The city also continued its efforts of clearing the city’s thoroughfares with spaghetti wires.

Non obligatory use of face mask

Rama, early in September, also issued an executive order making the use of face mask in open spaces non obligatory; a few weeks after President Ferdinand Marcos issued an EO supporting Rama’s move-authorizing the voluntary use of face masks in open places and unpopulated outdoor areas with proper ventilation, with the goal of further improving the economy.

Rama also ensured that civil works for the long-overdue Cebu Bus Rapid Transit (BRT) project begins by October. Rama lobbied to reinstate the original routes that would serve passengers to and from Bulacao and Talamban.

The current city administration is also working for the launch of Public Wi-Fi portals in 50 barangays.

But Rama’s first 100 days in office is not without challenges.

Aside from internal challenges, particularly that in the city council during the deliberation of the P50 million financial aid to quake-hit local government units in Luzon, the administration also faced various protests involving the controversy with the agreement of the Carbon redevelopment.

A mass was celebrated by Msgr. Raul Go before the actual activity for the First 100 days of Rama was held.