Driver, whose taxi flipped over at the foot of the Tabunok flyover, is safe 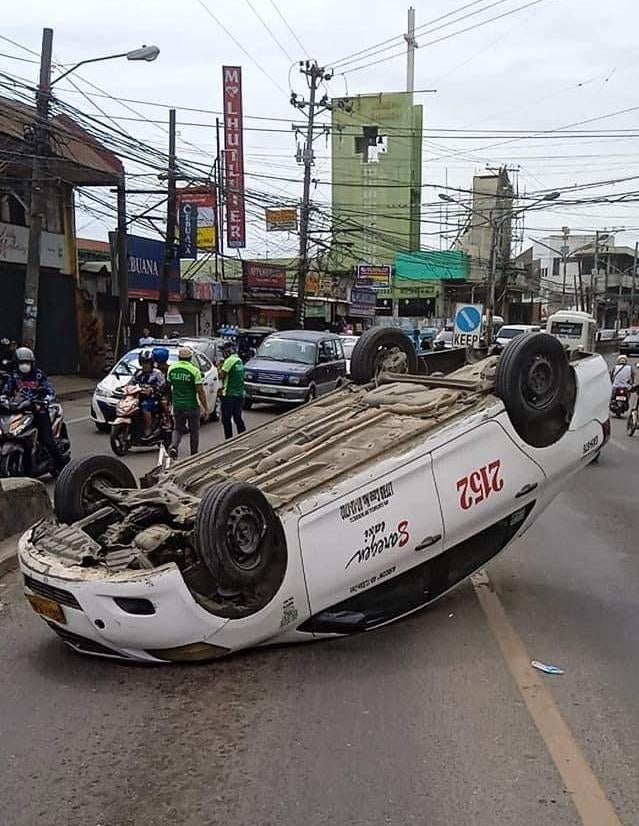 A taxi driver is safe after his unit flipped over at the foot of the Tabunok flyover in Talisay City past noon on Sunday, January 1, 2023. | Photo courtesy of CT-TODA via Pegeen Maisie Sararana

CEBU CITY, Philippines — The driver, whose taxi flipped over at the foot of the Tabunok flyover in Talisay City, is safe.

Jonathan Tumulak, chief of the City of Talisay Traffic Operations and Development Authority (CT-TODA), said that the taxi driver, identified as Hermie Papilleras, 53, admitted that he dozed off while driving his taxi. He sustained scrapes on his body.

(He said he did not drink liquor, but he was sleepy while he was driving.)

(He crashed on the side of the flyover as he was going up the flyover…He (the driver) had just dropped off a passenger in Lawaan and he was heading to Mambaling to park the taxi at the garage in Mambaling.)

Papilleras is a resident of Barangay Sawang Calero in Cebu City.

This accident happened at 12:35 p.m. today, Jan. 1, and after 15 minutes, authorities removed the vehicle from the road.

This is the second accident that happened in the city on Jan. 1, 2023 after two motorcycles were also involved in a minor accident in Baragay Pooc earlier today.

Following this incident, Tumulak reminds drivers to pay a quick stop in a safe area and take a nap if they are sleepy.

(Our advise and reminder to drivers, if you are sleepy, go to a safe place and take a short nap. Don’t force yourself to drive to avoid accidents.)

Truck driver involved in Talisay City accident to be released

Road accidents in CV up in 2022; several motorcycle crashes noted in Cebu