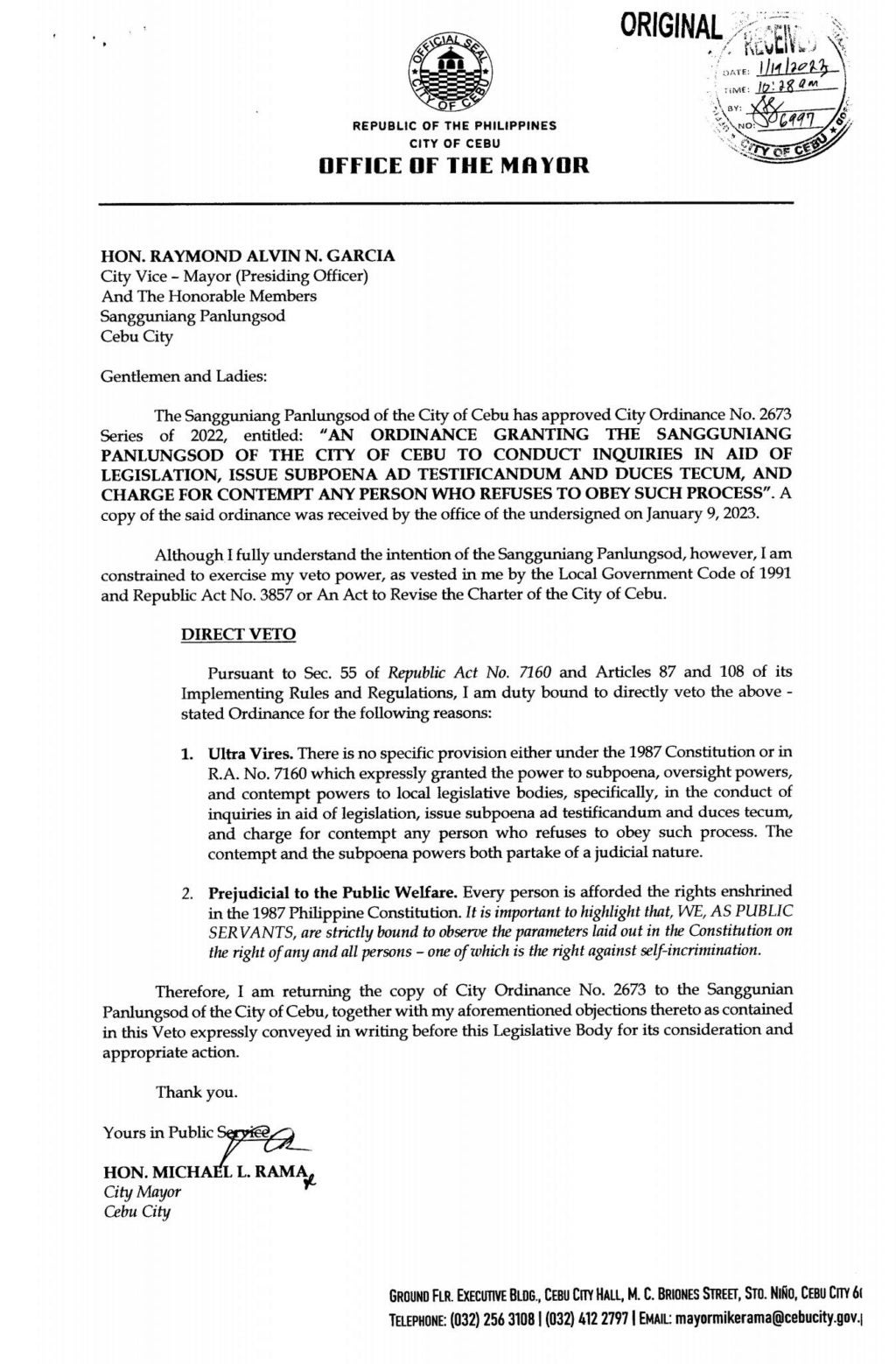 CEBU CITY, Philippines — The Cebu City Council on Wednesday, January 25, 2023, failed to override a mayoral veto of a proposed ordinance granting the council power to investigate “in aid of legislation” and power of subpoena and contempt.

The vote was 3-12, where 12 of the councilors present during the regular session on Wednesday, January 25, 2023, abstained.

A two-thirds majority is required for a successful override.

Three of the councilors were either also absent on Wednesday; they are councilors Rey Gealon, Franklyn Ong, and Jose Lorenzo Abellanosa.

Mayor Rama directly vetoed the proposed ordinance of De Los Santos, which grants the City Council the power to conduct inquiries with the power of subpoena and contempt because of two reasons.

Rama said the proposed ordinance is (1) “ultra vires” or outside the authority of the Sanggunian and (2) “prejudicial to public welfare.”

City Ordinance 2673 was approved by the council on the third and final reading last December 21, 2022.

A copy of this was received by the mayor last January 9, 2023, and was returned to the city council last Jan. 19.

According to the mayor, there is no specific provision either under the 1987 Constitution or in Republic Act No. 7160 which expressly granted the power to subpoena, oversight powers, and contempt powers to local legislative bodies, specifically, in the conduct of inquiries in aid of legislation.

As to the issue of the ordinance as prejudicial to the public welfare, the mayor maintained that “We as public servants, are strictly bound to observe the parameters laid out in the Constitution on the right of any and all persons- one of which is the right against self-incrimination.”

However, De los Santos, on Wednesday, told the council that the ordinance is not “ultra vires.”

“Though the mayor has quoted Republic Act 3857, specifically, Section 27, as the basis of his direct veto, but he refused to apply Section 14 of the same law of RA 3857,” she said.

Section 14, the councilor said, “grants the City Council the power to subpoena witnesses, administer oaths, and compel the production of books, papers, and other evidence.”

De los Santos also disagreed that the proposed ordinance is prejudicial to public welfare since the very essence of the said ordinance is to be transparent and accountable.

“How can the clamour for transparency and accountability be prejudicial to the public welfare?” the councilor asked.

She also said that under Section 10, paragraph E of the proposed ordinance, all statements, and testimonies, given by the witness during the investigation shall be considered “privileged communication.”

Councilor Young, for his part, said he was “surprised” that the mayor did not approve the ordinance.

“I remember him (Rama) very clearly as a councilor for three times and vice mayor, and I think if he was there, he would have voted for this…I am just surprised now that the council di man nuon ta musukol sa Mayor for a right which is supposed to be for the council nga dili man ni against sa Mayor,” he added.

The council’s regular session on Wednesday including the voting to override the mayoral veto was also live-streamed on the official Facebook page of the Sangguniang Panlungsod of Cebu City.       /rcg