Creative ways to get a signal in Carnaza Island MANDAUE CITY, Cebu – Have you heard of Cebuanos saying “nikatkat pa ko og lubi aron makasignal? (I climbed a coconut tree to get a signal)”

This is somewhat true when you are in Carnaza Island, an island barangay in Daanbantayan town in northern Cebu.

But its a little over 2, 000 residents do not literally have to climb a coconut tree to send a message or make a call, instead they stay close to coconut trees found on a hill in Poblacion proper to get a cellphone signal.

(A lot of people gather near the coconut trees in the afternoon to get a signal.) The area where the tallest coconut tree is located is one of the few places on the island that is reached by network signal. | Doris Bongcac

And this is just one of the creative ways that island residents practice to get a signal to make a call or receive or send a message.

Since the island is located on the Visayan Sea or about 18 nautical miles or at least 30 kilometers from mainland Daanbantayan, even the internet signal is a major concern here. Carnaza Island is located on the Visayas. | Google Maps

Islanders have found a creative way to address that also.

They place their WiFi routers inside pails or plastic containers and hang these on bamboo poles. 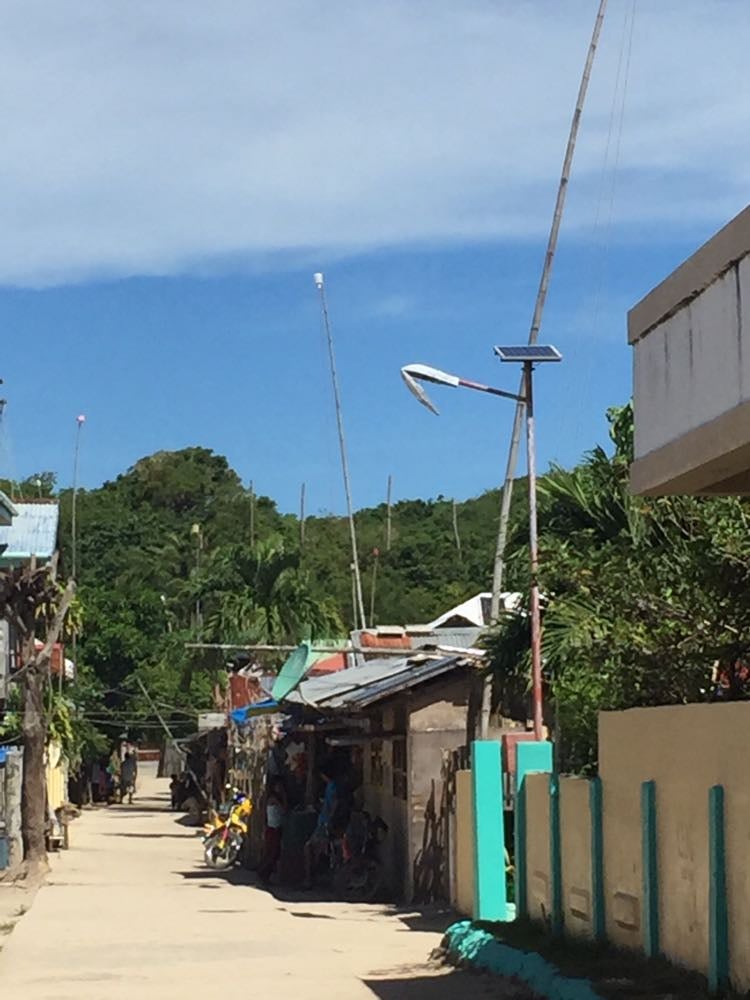 They then erect their bamboo poles on top of their roofs or outside of their homes to get internet signal.

Even their solar panels are also elevated. The WiFi router at the Carnaza Elementary School is placed on top of the school’s roof. | Doris Bongcac

And starting at dusk, those who can afford it start to operate their generator sets to power their homes.

(But we do not use our lights for a long period of time because of the expensive cost of fuel.)

Bernaldo said that genset powered lights are normally turned on from 7 p.m. to 9 p.m.

Those, who cannot afford to buy their own generator, started to the use solar power sometime in 2017. Island residents, who can afford, started to buy their solar panels in 2017. | Doris Bongcac

Bernaldo got their solar panel set just last year from the savings that her husband, Allan, earned from working as an overseas Filipino worker for five years and before the pandemic hit.

A set that already includes a small solar panel, which they source from a supplier in the nearby Masbate province, cost at least P10,000, she said.

For those, who don’t have that amount of cash, either they get their power from a genset owner and share the fuel cost or continue the use of gas lamps at night.

Carnaza Barangay Captain Roquita Rosell said that most of their over 600 households had power now. A free charging station is found outside the school premise. | Doris Bongcac

School officials also share their power supply to residents and even tourists, who needed to charge their cellphones or even their flashlights.

All they have to do is visit the free charging station that is located outside of the Carnaza Elementary School in Poblacion proper that operates from 5:30 a.m. to 7:00 p.m.

But despite these recent developments, Bernaldo said, that life on the island had remained simple. These fishermen prepare to go out to sea. | Doris Bongcac

Most men, including her husband, who had to take a break from his overseas work because of the pandemic, had to go out to sea to fish while the women had to stay at home to care for their families.  They also do other tasks like drying fish and backyard gardening to grow some of the vegetables that they need.

And since they live on a fishing village, they travel to the neighboring Masbate province or at mainland Daanbantayan to get their supplies.

A day in the life of a fisherman in Malapascua

Look: Let’s take a bath at the beach!

By: Morexette Marie B. Erram
Destinations