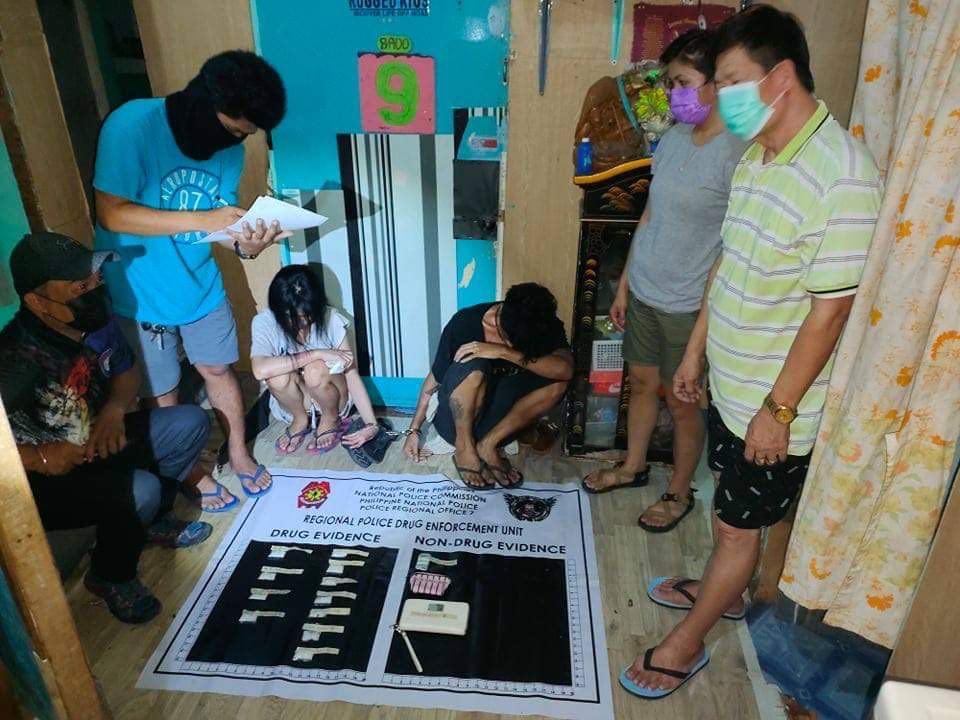 A female ‘freelance police asset’ and her cohort were arrested after operatives conducted a buy-bust operation on Saturday evening, September 25 in Barangay Kamputhaw, Cebu City. | Photo courtesy of RPDEU-7

CEBU CITY, Philippines — A 35-year-old woman, who became a “freelance” police asset to hide her illegal drug activities, was caught with an estimated P300,000 worth of suspected shabu in a police operation in her house in Barangay Kamputhaw, Cebu City.

Caroline Arda, 35, and her male cohort Gizese Alabanza, 26, were arrested during a buy-bust operation in her house on the evening of Sept. 25, said Police Major Glenn Hife, chief of the Regional Police Drug Enforcement Unit (RPDEU-7).

Hife said that Arda and Alabanza were caught with 52 grams of suspected shabu with an estimated market value of P353,600.

Hife also confirmed that Arda was a “freelance” police asset.

He said that she was considered a “freelance” police asset because she was not just a police asset of a certain police unit but she would provide information to several police units.

Hife said he believed that Arda took advantage of her being a ‘police asset’ for her illegal drug operation, and this was her style to possibly hide her image and involvement in this illegal activity.

(She will give info. I don’t know what her true goal is. There is a big possibility that she did this to penetrate the police units so that she could be recognized.)

(And by the time that she will be arrested, there will be somebody, for example, who would vouch for her that she is his police asset.)

However, Hife said Arda could not hide behind her being a police asset after she was caught selling the illegal drugs to an undercover policeman during the Kamputhaw operation on Saturday.

Hife said that after receiving reports about Arda’s illegal activities, they then monitored her for over a month and conducted the operation after they had already gathered enough information about her illegal activities.

Hife also said that because she was a police asset she was not in the drug watchlist, but after their monthlong case buildup, they found out that Arda was allegedly in the category of a high-value individual.

He said that Arda could allegedly dispose 500 grams of suspected shabu in a week.

Hife considered Arda’s arrest as a ‘big deal’ in their campaign against illegal drugs because they had foiled an attempt of a suspected drug dealer to use her being a police asset to hide her illegal activities from the police.

Arda was detained at Police Station 2 (Abellana Police Station) because the RPDEU detention cell had no facility for female detainees.

Her cohort, Alabanza was detained at the RPDEU detention cell though.

Both suspects will be facing charges for violating the Republic Act 9165 or the Comprehensive Dangerous Drugs Act of 2002 — selling illegal drugs.

Police: ‘Mentally challenged’ woman may have been mistaken for an asset