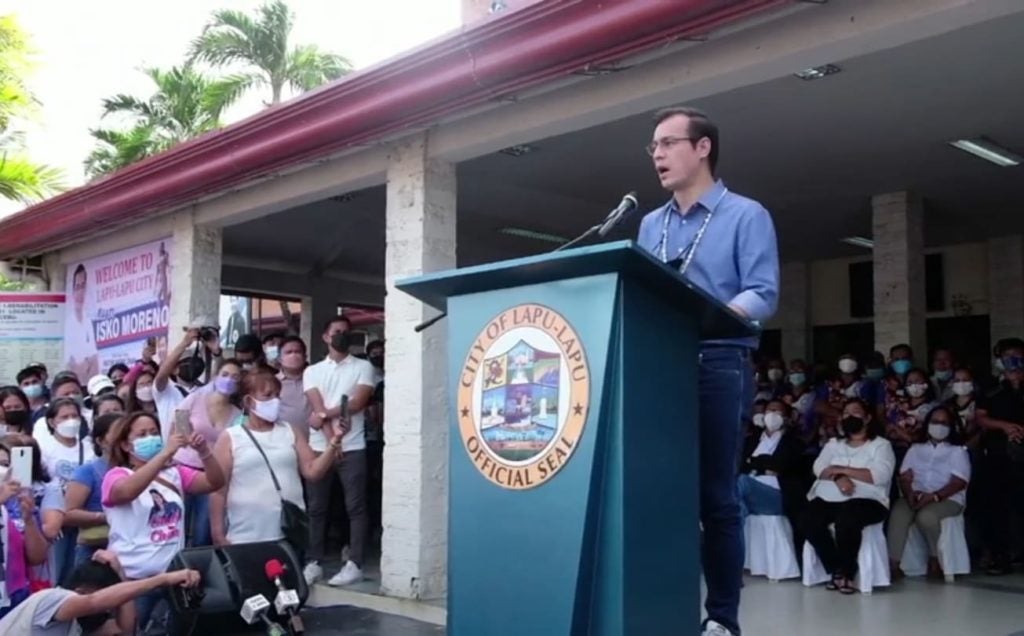 Manila City Mayor Francisco “Isko Moreno” Domagoso appeals to Oponganons for support in his bid for the post of President of the country today, December 6, at the Lapu-Lapu city hall. | Futch Anthony Inso

LAPU-LAPU CITY, Philippines — Lapu-Lapu Mayor Junard “Ahong” Chan has clarified that he has not yet endorsed any candidate for president in the upcoming 2022 national and local elections.

Chan made this clarification after Manila City Mayor and presidential candidate Francisco “Isko” Moreno Domagoso visited the city and addressed city hall employees to ask for their support in the coming elections on Monday morning, December 6, 2021.

Chan said that he would still wait for the announcement of his party, Partido Demokratiko Pilipino-Lakas ng Bayan (PDP–Laban) on who to endorse for the presidency.

Domagoso, during his address to city hall employees, vows to implement projects that will improve the lives of poor families.

These included the implementation of housing projects, livelihood, and improving the tourism industry in the country, among others.

(I have a secret for that so that it will happen here. I will ran for president. Right. You want that from happening here? I know how.)

Aside from this, Moreno said that he was still hopeful that the One Cebu Party, headed by Cebu Governor Gwendolyn Garcia, would also endorse him for the presidential race.

“Kasi dito naman sa Cebu, lahat nang yan ay under ng One Cebu ni Governor Gwen,” he said, adding that he would prove himself worthy of the party’s support and endorsement.

(Because here in Cebu, all of that are under One Cebu of Governor Gwen.)

Meanwhile, Domagoso is also open to including President Rodrigo Duterte in his slate for the senatorial bid.

He said that he would also vote for Duterte in the upcoming elections.

“Hindi natin pwedeng tawaran ang kanyang kakayanan. He is a qualified candidate of the Senate. In fairness to him, ako this is my personal choice,” he said.

(We cannot downplay his experience and skills. He is a qualified candidate of the Senate. In fairness to him, Me, this is my personal choice.)

After his address, Domagoso, together with Chan, accepted the challenge of Oponganons for them to have a Tiktok Dance after the flag-raising ceremony.