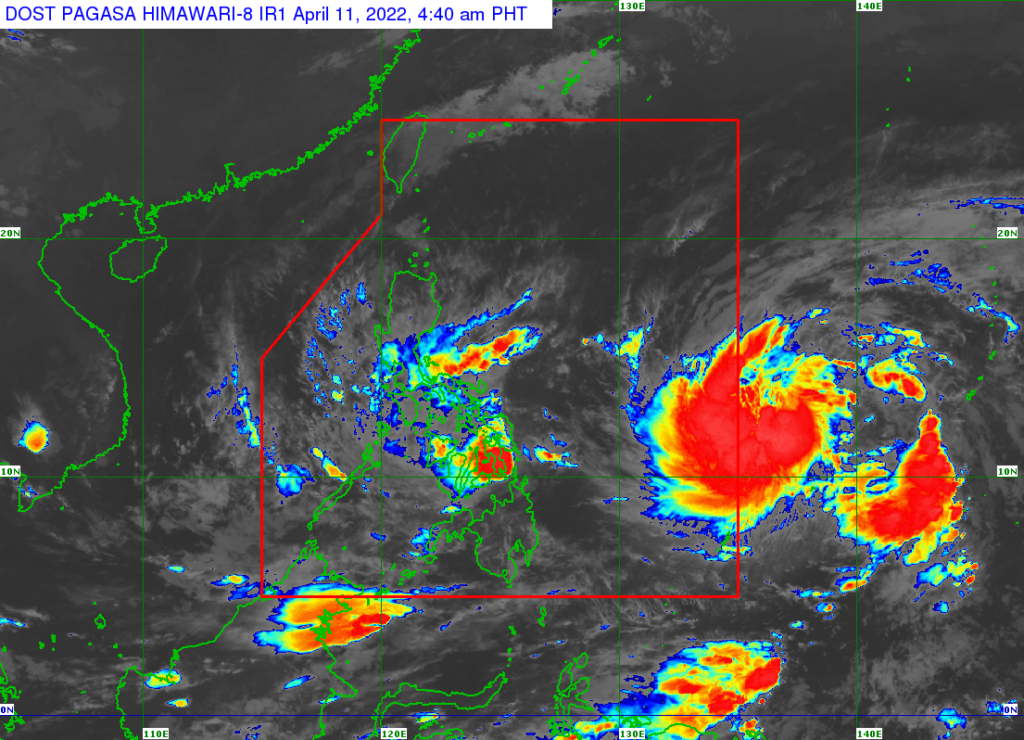 As of noon on Sunday, the PCG said it monitored more than 200 stranded passengers and cargo vessels in Eastern and Central Visayas, particularly Liloan Port Ferry Terminal in Cebu and Port of San Ricardo in Southern Leyte.

In the Bicol Region, 503 passengers were stranded in Matnog port in Sorsogon province.

Gremil Alexis Naz, spokesperson for the Office of Civil Defense in the region, said 473 rolling cargos and a vessel were also stranded.

Most of the passengers and vehicles were on their way to Samar.

The PCG, however, did not suspend boat trips bound for the island provinces of Catanduanes and Masbate from the mainland ports in Albay and Sorsogon.

The PCG said most of the stranded travelers were going home to their provinces for the Holy Week, as it monitored a total of 13,640 outbound and 10,421 inbound passengers in all ports nationwide on Sunday.

All PCG units were placed on heightened alert for the duration of the holidays, with almost 2,000 front-line personnel in 15 districts having inspected a total of 156 vessels and 193 motor bancas.

The PCG commandant, Adm. Artemio Abu, said in a statement: “I instructed district commanders to be present on the ground and oversee the implementation of maximum security measures. They are also responsible for supervising the conduct of regular port monitoring and coastal security patrol in major tourist destinations.”

He said he had also ordered intensified vessel inspection to ensure the seaworthiness of all passenger vessels, including the availability of life jackets and other lifesaving equipment on board, as well as proper documents before issuance of clearance to depart.

Abu appealed to the public to be patient during the predeparture inspection and ensure that they had all documentary requirements requested by the local governments in their destinations to avoid delays.

He further advised travelers to be at the port terminals at least three hours before their scheduled departure to give ample time for safety and security checks and predeparture inspections onboard the vessels.

On Saturday morning, a cargo vessel capsized in the sea off Ormoc City, Leyte province, after it encountered big waves and strong winds.

Initial reports from the PCG in Ormoc said the MV Celsa 2 was about to leave for Cebu City at 10 a.m. when the 395.53 tonnage vessel capsized.

It had yet to be determined, as of this writing, how many crew members were in the vessel.

Meanwhile, officials in Tacloban said the disaster risk reduction and management office would be operating daily under the city’s “blue alert” emergency status, while the social welfare and development office was also ordered to prepare all evacuation centers.

In the towns of Merida and Leyte, at least 23 barangays were without electricity after heavy rains and strong winds disrupted their power supply.

In Maasin City near the southernmost tip of Leyte island, Mayor Nacional Mercado called off work and classes on Monday.

Three other villages in Southern Leyte were affected by landslides over the weekend but nobody was hurt, according to a report by the Department of Public Works and Highways.

In western Samar, three people were rescued after their motorized banca sank in the waters off Barangay Botaera in the town of Zumarraga town on Saturday afternoon.

Stephanie Doblon, 29; Gabina Vudlong, 62; and Rey Doblon, 38, came from Daram Island, also in the province, when their boat was battered by heavy rains.

The rains also destroyed a bridge in Barangay Cagusuan in Homonhon Island at the southernmost tip of Samar Island.

Mayor Annaliza Gonzales Kwan of Guiuan town in Eastern Samar suspended work and classes on Monday, including in Homonhon, which is under Guiuan’s jurisdiction.

In Cebu, some 200 passengers were stranded in different ports since Saturday evening, and most of them decided to return home by Sunday.

The Mines and Geosciences Bureau said around 4,000 barangays in the region could be affected by floods and landslides due to the rains.

According to updates on Sunday afternoon, the storm was forecast “to move erratically or remain almost stationary” over the eastern portion of Leyte and the southern portion of Samar Island and its coastal waters from Sunday to early Tuesday.

Agaton is expected to interact with Tropical Storm “Malakas,” a tropical cyclone outside the Philippine area of responsibility, by mid-Tuesday, Pagasa said.