Researchers from the University of British Columbia found that smelling a romantic partner’s clothing significantly lowered stress levels among the participants. Entitled “Olfactory cues from romantic partners and strangers influence women’s responses to stress,” the research was published last January 3 in the Journal of Personality and Social Psychology.

In the study, 96 women were randomly assigned to smell one of three scents: their romantic partner’s, a stranger’s, and a neutral scent. Women were chosen to participate in the study due to the fact that females are more sensitive to olfactory information compared to men.  Afterwards, all participants were put under the Trier Social Stress Test—a laboratory procedure that has been used to reliably induce stress in humans since 1993. The test is comprised of activities like a mock job interview and a math exercise.

The experiment showed that the women who smelled their romantic partner’s scent before the stress test had lower perceived stress levels as well as lower cortisol levels compared to those who smelled a stranger’s scent. Cortisol, referred to as the “stress hormone,” is released by the adrenal glands in response to fear or stress as part of the fight-or-flight mechanism.

It’s also interesting to note that among those who were given their romantic partner’s shirt to smell, those who correctly identified the scent as belonging to their partner had the lowest stress and cortisol levels. 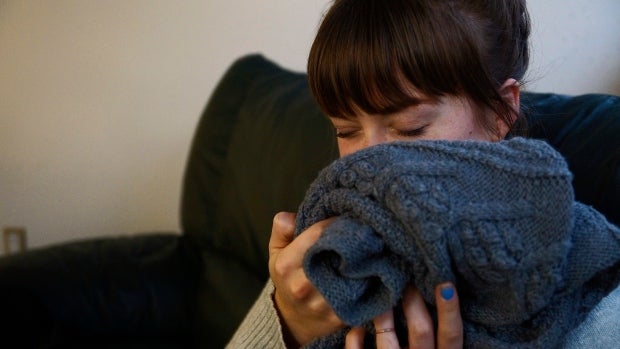 Studies show that getting a whiff of your special someone’s scent reduces your stress levels.

“Our findings suggest that a partner’s scent alone, even without their physical presence, can be a powerful tool to help reduce stress.”

Smelling a stranger’s shirt produced the opposite effect: participants exhibited higher cortisol levels compared to those who smelled neutral shirts.

“From a young age, humans fear strangers, especially strange males, so it is possible that a strange male scent triggers the ‘fight or flight’ response that leads to elevated cortisol,” said Hofer.

It has long been established that the sense of smell is a powerful trigger for memories and emotions among humans, and is probably more successful at doing so compared to our other senses. How often have you caught a whiff of something—a specific flower, old books, freshly baked bread— and have been instantly transported to a distant memory?

This feeling of having smell-induced flashbacks is called the Proust Phenomenon, named after the writer Marcel Proust who once wrote about the memories he was reminded of by the smell of biscuits soaking in tea in his novel In Search of Lost Time.

The probable explanation for this phenomenon is the anatomy of our brains. Unlike visual, auditory, and tactile information, olfactory information has direct connections to the amygdala and the hippocampus, two brain areas that are main players in emotion and memory.  The connections between our olfactory organs and the language centers of the brain (Broca’s area and Wernicke’s area) are weak, on the other hand. As Diane Ackerman explained in her book “A Natural History of the Senses“:

Following this logic, it is probable that our memory of our loved ones, which comes to us when we smell their scent, is what causes us to become relaxed. The study by Marlise Hofer’s team further proves just how much our sense of smell impacts our everyday lives even if we don’t notice it.

Stress and the work-related illnesses of seafarers

By: PR
Health and Wellness

Three liver and colorectal problems you should watch out for