LAPU-LAPU CITY, Philippines — Central Visayas was among the regions in the country with high number of cases of human trafficking.

This was confirmed by Rhodelia Viajedor, Inter-Agency Council Against Human Trafficking (IACAT) focal person of the Department of Social Welfare and Development in Central Visayas (DSWD-7).

(Unfortunately, region seven is one of the areas with a high number of cases of trafficking.)

Based on the data from the Philippine National Police (PNP)-Women and Children Protection Center (WCPC), the authorities have already rescued 22 individuals who were victims of human trafficking in the region from January to June 2022.

These are from 16 police operations in the region, which resulted in the arrest of 12 perpetrators. The PNP-WCPC has also filed four cases involving human trafficking this year. 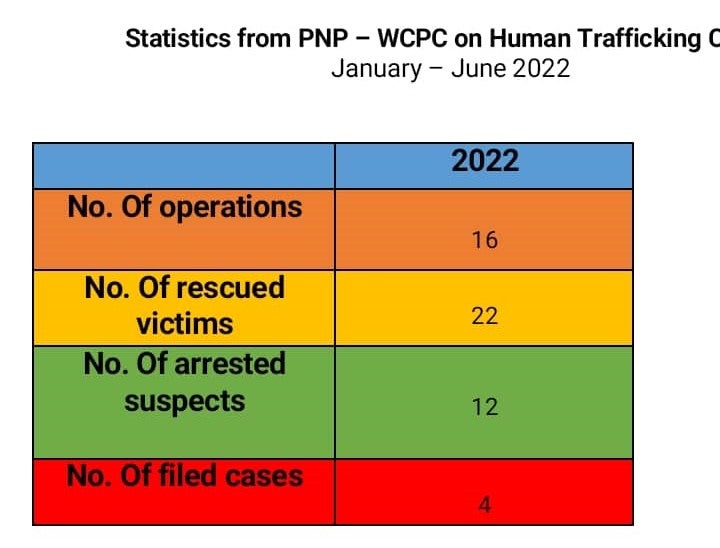 (Our PNP had a report during the pandemic that the reporting of this cases went down, but again it had started to peak.)

This refers to the recruitment, transportation, transfer or harboring, or receipt of persons with or without the victim’s consent or knowledge, within or across national borders by means of threat or use of force, or other forms of coercion, abduction, fraud, or deception.

Trafficking in persons also refers to the abuse of power or of position, taking advantage of the vulnerability of the persons, or, the giving or receiving of payments or benefits to achieve the consent of a person having control over another person for the purpose of exploitation which includes at a minimum, the exploitation or the prostitution of others or other forms of sexual exploitation, forced labor or services, slavery, servitude or the removal or sale of organs.

In 2020, the police reported 22 operations involving human trafficking, which resulted in the arrest of 5 individuals while 56 victims were rescued.

Meanwhile, in 2021, the PNP conducted 13 operations while 22 individuals were rescued.

Last July 30, the agency celebrated World Day Against Trafficking in Persons with a theme: “Use and abuse of technology.”

PH efforts against human trafficking lauded in US report