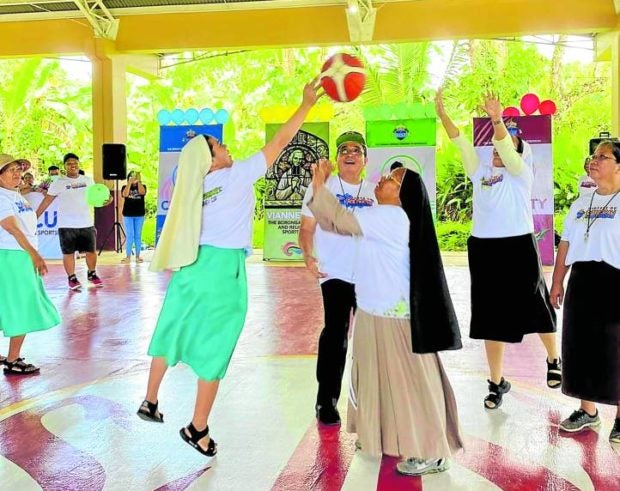 JUMP BALL | Nuns vie for possession of the ball during the Vianney Cup, a sports fest held at the minor seminary of the diocese with Borongan Bishop Crispin Varquez at the opening ball toss. (Photo courtesy of FR. EDMEL RAAGAS)

BORONGAN CITY, Eastern Samar, Philippines — Nuns from different congregations let their hair down but kept their habits on as they showed off their skills dribbling, passing, and shooting the ball in a pickup game in this Eastern Samar city.

The religious sisters took part in the basketball event of the Vianney Cup, an annual sports festival and fellowship among the clergy and the religious from the city diocese, held this year from Aug. 8 to Aug. 9.

The tournament, organized in honor of St. John Marie Vianney, the patron saint of diocesan priests, also had volleyball, badminton, table tennis competitions, and other indoor sports — but not mahjong, the tile game which a recent controversial movie falsely depicted as the pastime of Cebu’s Carmelite nuns.

This year, the three teams vying for the top prize were named after Christian virtues: “Chastity,” “Poverty” and “Obedience.” Sister Mylene Malinao, 37, of the Living the Gospel Community, said she was thrilled to try the basketball skills she had learned as a teenager against her fellow nuns from the Diocese of Borongan.

“It was the first time I played ball with other religious sisters,” she said.

“I love playing basketball and volleyball since my teenage days. It gives me satisfaction and a refreshing feeling because it keeps me active and gives me a break from my regular duties of praying and working in my apostolate,” Malinao said.

A nun’s life isn’t always that serious, said Sister Edel Betaizar of the Presentation of Mary congregation, since there can be time for games and exercise.

But mahjong is hardly ever their choice of diversion, she said.

The nun was alluding to the scene in the movie “Maid in Malacañang” showing the cloistered Carmelite nuns playing mahjong with future President Corazon Aquino at the height of the 1986 Edsa People Power Revolution that toppled the dictatorship of Ferdinand Marcos Sr.

Betaizar deplored the way the nuns were depicted in the movie, which angered many for its revisionist take on the last days of the Marcoses in the Palace before their exile to the United States.

“I have been a nun for 25 years and mahjong is a strange concept to me, more so the contemplative nuns in Cebu who were in the midst of fear and chaos at that time,” the nun said.

“[The mahjong scene] was totally fake and irresponsible. It shows how some people could go low for fame and money,” Betaizar said.

Sister Mary Josephine, a contemplative nun of the Order of St. Clare, shared the sentiment.

“I believe that anybody in his or her right mind will not think of leisure in the midst of a clear and present danger. As contemplatives, we spend our time in front of the tabernacle in prayer. It is a fake story and a lame depiction,” she said.

Turning to a happier subject, Sister Gina Rama of the Religious of the Virgin Mary said it was also her first time to participate in the Vianney Cup.

“I have not seen this in other dioceses. Here, all the religious men and women and the diocesan clergy allot time for games and fellowship,” said Rama, who has been a nun for 24 years.In the end, Team Poverty emerged as overall winner, followed by Chastity and Obedience.

All of the participants went home with cash prizes, which were later turned over to an orphanage, a prison ministry and persons with disabilities.

In his opening address at the games, Borongan Bishop Crispin Varquez stressed the importance of journeying together as children of God, and of priests and the religious responding to the call to build not “our kingdom” but God’s.

“We do our ministry and charism, not to do what we want, but what God wants us to do. We serve the people entrusted to us not according to our plan but according to the plan of God,” he said.

And that plan, according to the bishop, includes having good, clean fun.

Read Next
Bornea to fight in Mexico – Probellum