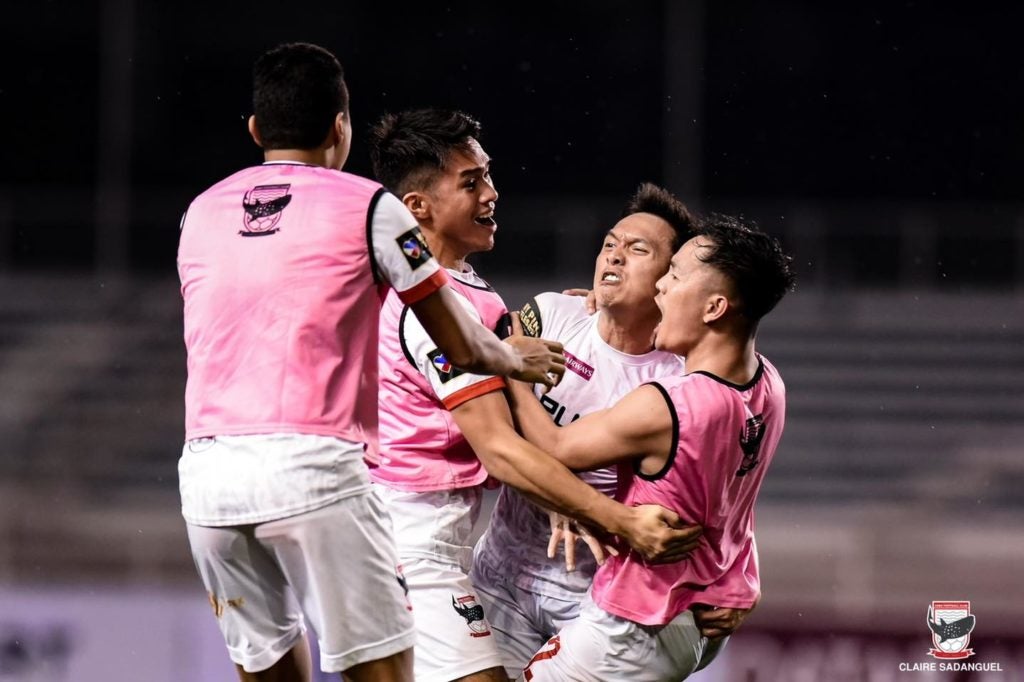 JB Borlongan celebrates with his teammates (wearing pink singlet) after scoring the goal for Cebu FC during their match against UCFC in the PFL. | Photo from Cebu FC’s Facebook Page

It was a fitting comeback for the Gentle Giants after opening their campaign in the PFL with a loss against Kaya FC Iloilo, 0-3, last August 14, 2022.

University of the Philippines (UP) standout JB Borlongan scored the equalizer for Cebu FC at the 87th minute to force the reigning champions to a draw. Before that, UCFC scored the first goal courtesy of Azkals veteran Mark Hartmann at the 71st minute.

It was a closely-fought match with UCFC controlling the ball with 57 percent, while Cebu FC had 43 percent ball control.

UCFC also had 22 total shots which were mostly done in the second half, while Cebu FC had 15 which came mostly in the first half. UCFC had 12 shots on target compared to Cebu FC’s five, while both teams were tied at 12 in terms of the chances created to make good shots.

During the first half, Cebu FC came out aggressively by attacking UCFC on all fronts including a close call from Chima Uzoka who went wide after kicking the ball with his weak left foot in the opening minutes.

Turkish ace scorer Arda Cinkir also had a good look with his attempt at the 7th minute coming from Ren Okuda’s long pass, but the ball hit the cross bar.

Fellow Turkish Mert Altinoz also had a good chance of scoring a goal for Cebu FC at the 11th minute after breaking free from three defenders, but his attempt also went wide.

However, in the second half, UCFC turned the tide when they retaliated with relentless attacks which eventually converted into a goal. Hartmann perfectly flicked the ball with a header inside the goal in the 71st minue coming from Simen Alexander Lyngbo’s long pass.

Not to be outplayed, Cebu FC remained composed, countering UCFC with numerous attacks until Altinoz got tackled in the 87th minute which gave them a free kick.

Borlongan did the honors of kicking the ball during the free kick which remarkably went right through a five-man wall. The ball then slipped into the hands of goalkkeeper Florencio Badelic and into the net to score the equalizer.