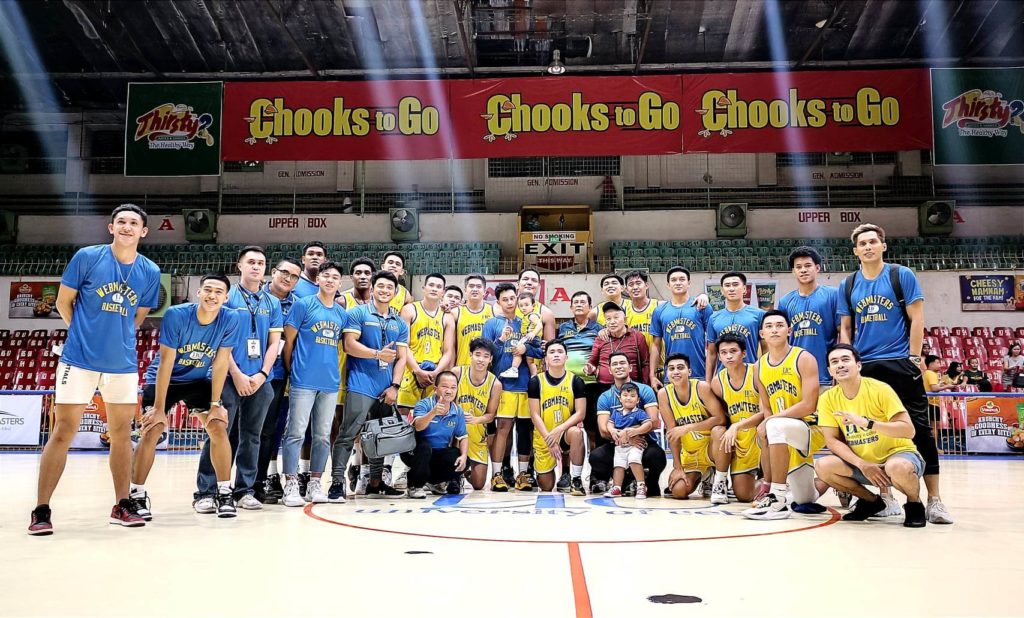 The UC Webmasters take time for a group shot after getting the fourth win in eight games, putting them at No. 3 in the standings together with the USJ-R Jaguars. | Glendale G. Rosal

CEBU CITY, Philippines — The University of Cebu (UC) Webmasters improved their chances to advance to the playoffs of the Cebu Schools Athletic Foundation Inc. (Cesafi) men’s basketball league after obliterating the University of the Visayas (UV) Green Lancers, 85-66, in their rematch on Sunday evening, Nov. 20, 2022, at the Cebu Coliseum.

The victory was very crucial for the UC Webmasters, who aim to maintain their position in the top four of the six-team league in order for them to advance to the playoffs.

The win improved their record to four wins and four losses to tie with the University of San Jose-Recoletos (USJ-R) Jaguars at the No. 3 spot in the team standings.

“We only need to win one more game, but we have two games remaining. We are at No. 3 in the team standings and share it with USJ-R. We don’t entirely need to score big for the points quotient, but we badly need one more win to advance to the playoffs. It’s all about positioning in the top four. Kinahanglan mokayod ta ug maayo (We need to work hard),” said UC’s head coach Kern Sesante.

Meanwhile, UV will return to action against USJ-R on Tuesday, Nov. 22.

In their first meeting on Nov. 5, 2022, the Green Lancers defeated the Webmasters, 76-61, however, it was a complete contrast on Sunday evening when the latter took control of the ball game on both ends of the floor.

UV started off with a sizzling, 9-0, run in the first period, but UC stormed back taking the lead, 14-13, with Jasper Pacaña topping it with a triple.

UC entered the second period with a five-point cushion, 24-19, but UV managed to tie it at 37-all heading into halftime.

In the second half, both teams went at each other resulting in multiple lead changes with UC ahead by two, 55-53, heading into the final period.

UC then unleashed a 17-2 run to establish a staggering 19-point lead, 74-55, with Jhiey Paraldo and Joseph Arth Nalos leading the offense.

The Webmasters weren’t satisfied with their commanding lead, and unleashed another brief scoring blitz to stretch their lead to 24 points, 81-57, en route to their crucial win.

Nalos finished with 20 points to lead UC Webmasters, while Paraldo and Pacaña each scored 14 points, and John Regie Dahab had 12.

Rovello Robles was the lone double-digit scorer for the Green Lancers with 11, while Paul John Taliman had nine, and Ehman Suarez with eight.