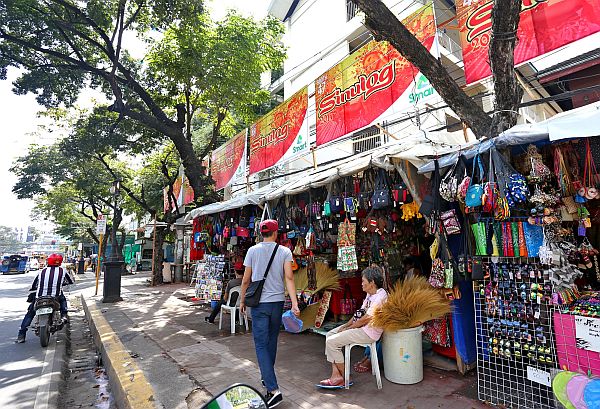 Vendors, who are part of the Sinulog Street fair in this January 2017 photo, sit in their stalls as they wait for customers to buy their wares. | CDN FILE PHOTO

CEBU CITY, Philippines — While the Sinulog 2023 Grand Festival will take place at the South Road Properties (SRP), locals and tourists can also enjoy other Sinulog-related activities along Osmeña Boulevard and at Plaza Independencia.

(This area in Abellana, this is for SFI. It has already been set up. Different things, the T-shirts, this has zoning. The vendors are only looking for space. We are trying to find out what other products to sell.)

Aside from the street fair, he said there would also be nightly shows at the Plaza Independencia prepared by the Office of the Vice Mayor since Vice Mayor Raymond Alvin Garcia is the chairman of the presentation cluster.

These nightly shows at Plaza Independencia are expected to start on Jan. 6, 2023, the day of the Sinulog Opening Salvo.

Labella also announced that several higantes and floats would join Sinulog contingents during the Sinulog Grand Parade at SRP.

SFI: 20 contingents have already signed up for Sinulog 2023

SFI aims to draw 2 million spectators during Sinulog at SRP