Octagenarians, nonagenarians to get financial incentives from Cebu City 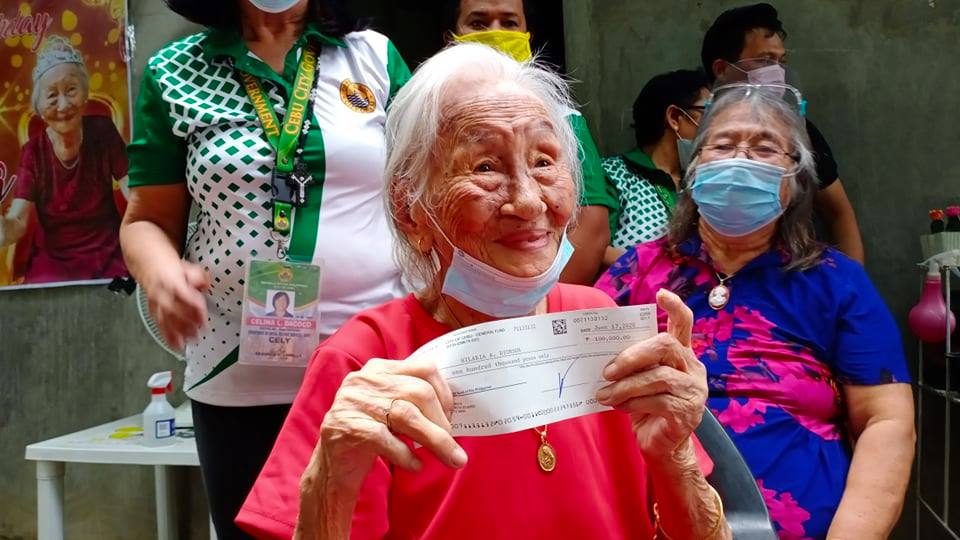 Centenarian Hilaria Dionson shows off the P100,000 cheque from the Cebu City government in this September 2020 photo. | file photo

CEBU CITY, Philippines — Octagenarians and nonagenarians in Cebu City may start getting a financial incentive starting 2022 following the passing of an ordinance that would distribute the P100,000 incentive for centenarians along two decades.

Councilor Eugenio Gabuya, Jr., the main proponent of the ordinance, said that the city government’s support to people who reach 100 years old is a good program, but the reality shows that by age 80 years old, senior citizens were already suffering multiple illnesses.

Every centenarian, who are residents of Cebu City, is entitled to P100,000 from the city government for reaching such age. With the passed ordinance, this incentive can already be availed of as early as 80 years old, in a staggered manner.

This will only be applicable for those who has not turned 100 yet, as those, who have turned 100 years old by the implementation of the ordinance, will get the full P100,000 incentive.

All octagenarians or those from 80 to 89 years old can then avail of their P5,000 incentive upon the implementation of the ordinance.

The ordinance, which was co-authored by Councilors Raymond Garcia and Leah Japson, originally allotted more incentives to octagenarians, but the authors opted to lower the incentive considering the limitations of the budget of the city government.

Gabuya is confident that Mayor Edgardo Labella would sign the passed ordinance and implement it as the mayor has been known to champion senior citizens as he is a senior citizen himself.

Should the ordinance be implemented, the Office of the Senior Citizens (OSCA) would facilitate the idenitification of qualified senior citizens and the distribution of the financial incentive as well.

The councilor hopes that the ordinance will help the senior citizens, who managed to reach the old age and reward them for their long lives.

The financial incentives would also allow the city government to help more senior citizens than before.