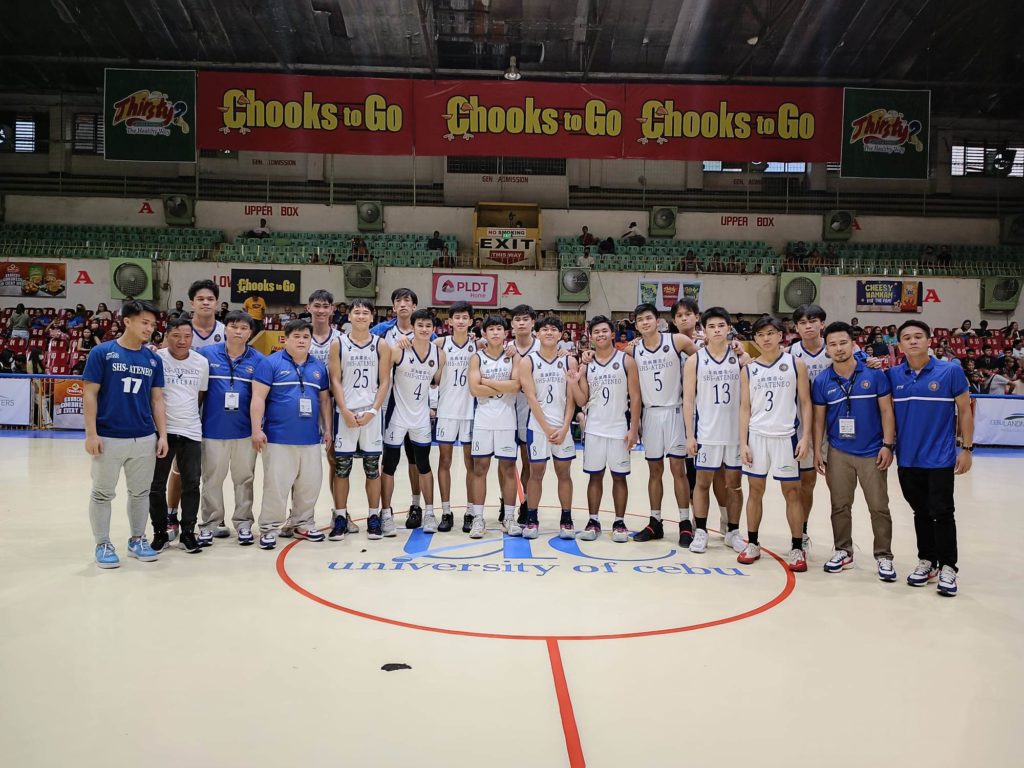 The SHS-AdC Magis Eagles players and coaching staff take time out for a group photo after securing a needed win against UC Baby Webmasters at the Cesafi high school basketball tournament on Saturday, Nov. 26, at the Cebu Coliseum basketball court. | Glendale G. Rosal

The Magis Eagles only have one remaining game on Tuesday, Nov. 29, 2022, against the No. 4 team, the Cebu Institute of Technology-University (CIT-U) Wildkittens to finish their elimination round campaign.

No. 2 spot in Cesafi HS basketball

Their victory against the Baby Webmasters virtually sealed their position at the No. 2 spot with the latter needed to win their last remaining elimination game also on Tuesday against University of Southern Philippines-Foundation (USP-F) Baby Panthers to remain at the No. 3 spot.

For the Magis Eagles’ head coach Rommel Rasmo, his team remains focused and stayed positive despite dropping down to the second spot of the standings following their Nov. 12 loss against the City of Bogo Science and Arts Academy (CBSAA) Trailblazers, 79-82.

“After that game, I reminded the boys to stay positive and stay focused. We need to keep playing together. No offense to the other teams, I really believe that if we play our signature Magis Eagles basketball, we will be good, and the result will be positive,” Rasmo told CDN Digital.

“Today, I’m happy they really played well. During our huddle, I didn’t write anything, I just told them don’t waste today’s chance because you might not get this tomorrow. We have to move on and focus on the next game and they delivered a big win,” he said.

During the game, the Magis Eagles stormed back from a 10-point deficit in the third period, 51-41, cutting the lead to just two, 51-53, heading into the final period.

Both teams traded baskets with the Magis Eagles grabbing the lead, 62-61.

They went on unleashing a 23-17 run en-route to their big win.

“The pressure is always there. As the defending champions, we always handle the pressure professionally and we know how to deal with it. As the coach I am here to guide the boys in this journey so they’re ready for the real game that is life,” said Rasmo.

On the other hand, the Trailblazers finished the elimination round with an impressive 9-0 (win-loss) record to etch a historic feat in Cesafi as the first rookie team to have such record.

They defeated the UC Lapu-Lapu Mandaue (UCLM) Baby Webmasters, 73-61, in the other high school game on Saturday.