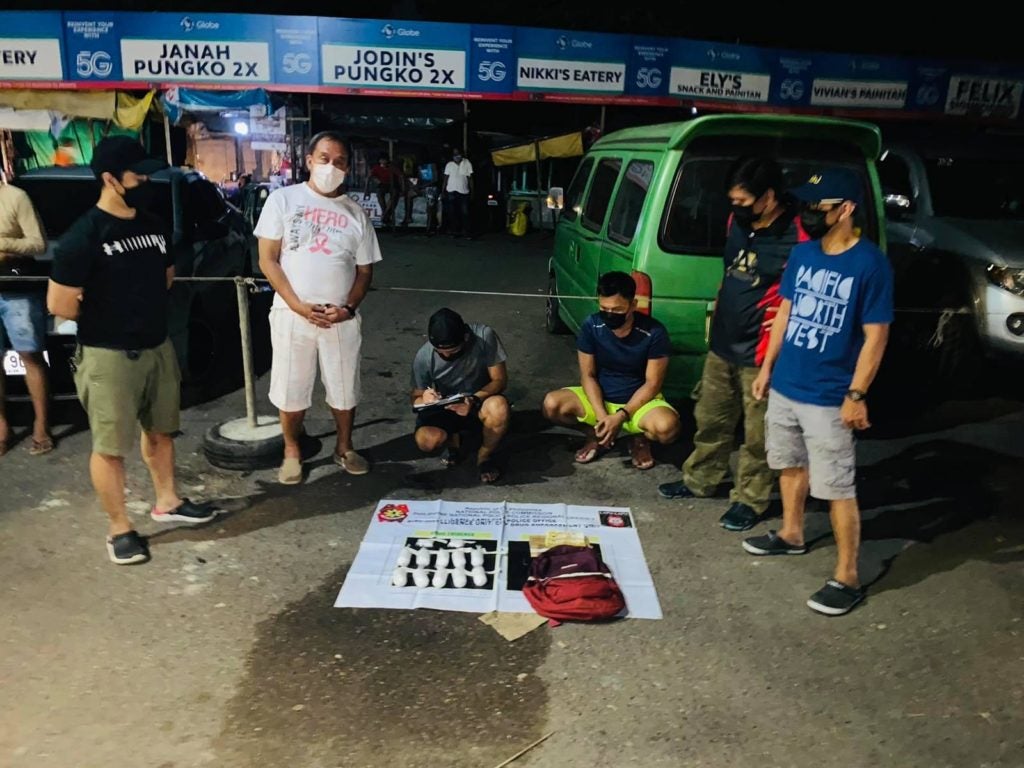 A 33-year-old high-value individual for drugs was arrested after being caught with more than a kilo of ‘shabu’ in barangay Pajo, Lapu-Lapu City on Saturday evening, September 25. | Photo courtesy of LLCPO

CEBU CITY, Philippines — Lapu-Lapu policemen are going after the supplier of the suspected Cebu City drug dealer, who was caught with P7 million worth of suspected shabu during a buy-bust operation in Barangay Pajo this city on Saturday evening, Sept. 25.

Bicoy said Lucaña was caught with a kilo and 50 grams or 1,050 grams of suspected shabu during a buy-bust operation in Barangay Pajo.

He said that the confiscated suspected drugs had a market value of P7 million.

Bicoy said that they believed at first that Lucaña was the supplier of illegal drugs in some areas of the city after his name would come up after several buy-bust operations in Lapu-Lapu City.

But after his arrest, police found out that he was just a drug courier or drug dealer and not the supplier of illegal drugs.

(At first we believed that he was the supplier, but later on, we learned that there was somebody bigger than him. It seemed that he [Lucaño] was just an errand boy or a drug courier, and he would just be given a percentage by the owner of the drugs. Other than being asked to do errands, he also sold illegal drugs in the Cebu City area.)

Bicoy said that Lucaña would receive around P5,000 per delivery from the person he was working with, but the amount would change depending on how many grams of illegal drugs that he could dispose of.

For instance, Bicoy said that from the 55 grams that their poseur buyer ordered from Lucaña, the latter could possibly have around P10,000 from that transaction alone.

Bicoy further said that it took at least two weeks of case build-up for them to close a transaction with Lucaña since he was so careful in dealing with his customers.

He also said that Lucaña was also considered a high value individual who could dispose of around 200 grams of shabu in the city of Lapu-Lapu, Mandaue and Cebu, and in some areas in Cebu Province in a week.

Lucaña was detained at the Lapu-Lapu City Police Office detention cell pending the filing of charges.

Bicoy said that they had already controlled the drug situation in the city and that now most of the sources of illegal drugs ending here would mostly come from Cebu City.

(Here in Lapu-Lapu, we have already controlled it [the drug situation]. We have been relentlessly conducting operations and we have several targets. We can analyze  and say that here in Lapu-Lapu, the big-time players are afraid to do their illegal business.)

He said there had been a big difference in the illegal drugs situation in the city today as compared to the pre-pandemic days.

He said that in the pre-pandemic days selling of illegal drugs in the city had been rampant but in the present days, drug players were hiding and were very cautious at closing transactions with buyers.

Bicoy cited their intensified illegal drug operations and their continued police visibility as among the factors  that helped them control the situation of illegal drugs in the city.

Read Next
Bohol boxers ready to rumble in ‘Kumong Bol-anon’