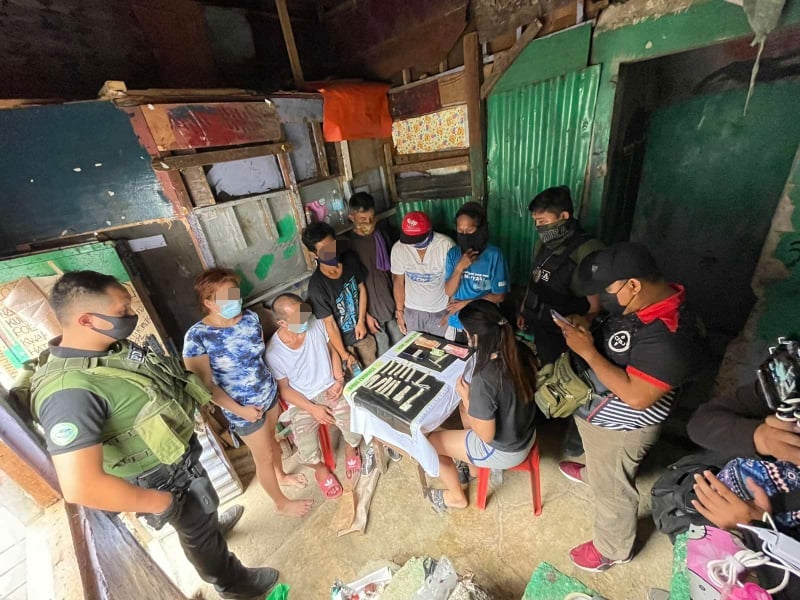 CEBU CITY, Philippines — Shutting down the operation of drug dens has been the focus of the Philippine Drug Enforcement Agency in Central Visayas (PDEA-7) in their campaign against illegal drugs.

But what makes it different from just having relentless buy-bust operations?

PDEA-7 describes closing the operations of drug dens as a high-impact operation because the anti-drug agency strongly believes that these drug dens can be breeding grounds of criminality in the community to which they belong.

And they are following a holistic approach in dealing with the drug problem where they not only put weight on the drug apprehensions but also on the supply, demand, and market reduction, which would impact the anti-drug campaign in the long term.

Leia Alcantara, PDEA-7 spokesperson, said that even at the height of the pandemic, they were still receiving reports of the presence of drug dens here in the region.

This meant that the drug supply, demand, and market were still here.

However, Alcantara said that there was a big chance that supplies disposed of in the region were possibly leftovers of previous drug trades.

She also said that there was a dent in drug supply in the region because of intensified interdictions that they had regularly done in the entry and exit areas of the region such as in ports and terminals.

They also closely coordinated with the terminal and port management and some delivery firms in ensuring that their services would not be tainted or used by drug personalities in their illegal drug trades.

From January to August in 2019, the PDEA-7 has recorded closing down at least 48 drug dens. Within the same period in 2020, during the height of the pandemic, they were only able to shutdown at least 26 drug dens in the region.

Now, in the second year of battling COVID-19, they were able to close down 27 drug dens where 21 of which were located in Cebu City. 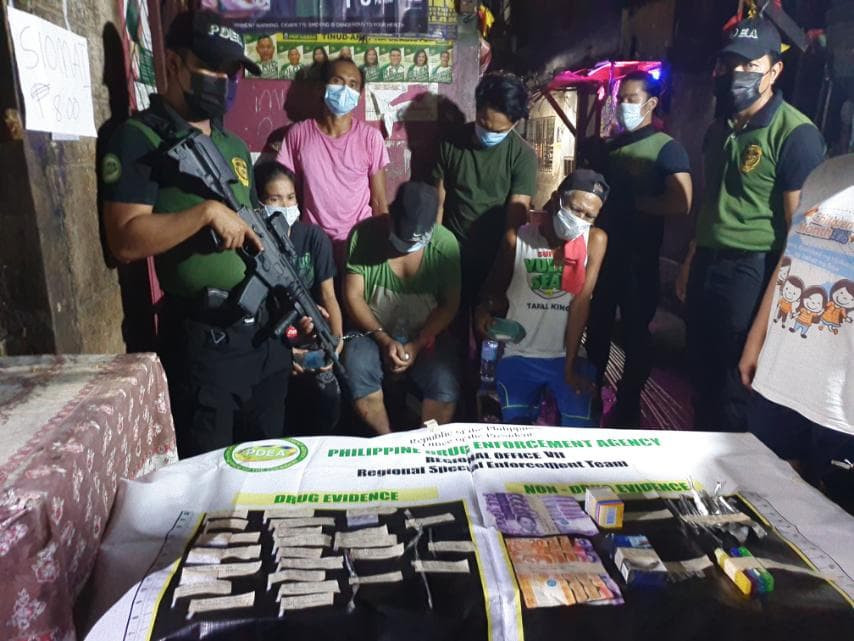 Reason for maintaining a drug den

One of the most common reasons that people go into the drug trade is poverty.

Agent Jonar Cuayzon, team leader of the PDEA-7 Special Enforcement Team, said that most drug maintainers that they had apprehended would usually point to poverty as the reason they had engaged in the illegal activity.

Cuayzon said that these drug den maintainers claimed that going into the illegal business was a last resort to survive the pandemic.

In a day, Cuayzon said that a drug den maintainer could earn P25,000 from their drug dens not only from the items they sold but also from fees for the drug paraphernalia and rent for the place to use the drugs that the buyers had purchased.

In Cebu City alone, from the 80 barangays, PDEA-7 has classified 23 barangays as seriously affected of illegal drugs. This means these barangays have a big problem in terms of illegal drugs since drug den maintainers, drug protectors, drug pushers, and drug users are present in these areas.

Also, there are 55 barangays in Cebu City that are classified as moderately affected, which means both pushers and users are existing here.

Two barangays are also considered as slightly affected areas where drug users were only reported there.

In classifying these areas, it would be easy for PDEA-7 to monitor the drug personalities there and to assess how vast the reach of illegal drugs is in a community.

But, Cuayzon also said that most of the drug den maintainers were heavy drug users.

He said that maintaining drug dens for these people were their way to earn income and to take advantage of free items that they could have for their personal use.

For a heavy drug user, this could truly be an advantage, said Cuayzon.

For big-time drug personalities, drug dens are their market and source of money.

He said that shutting them down would be disrupting these big-time drug personalities’ illegal trade.

What happens next after shutting down drug den operations in a community?

What next? PDEA-7 spokesperson Alcantara cited the community’s vital role in the next step or in preventing the drug personalities for setting up shop again in the community.

She said that the community in all villages would play a vital role in ensuring that drug dens would not be set up again in their community.

She said that PDEA-7 were coordinating with the Barangay Anti-Drug Abuse Council (BADAC) to help them maintain PDEA-7’s goal of disrupting the illegal drug activities happening in those areas.

This means the barangay must be active in their monitoring and that they are not allowing another drug personality to enter their areas again and build a drug den there.

Should the barangay be complacent on this, drug personalities may go back to setting and maintaining drug dens there and then the cycle will continue.

Alcantara further said that they would need the community or the barangays’ help because the overall force of PDEA-7, which was made up of 140 personnel, would not be enough to cover all areas in the region.

That is why part of PDEA-7’s programs is to also empower the barangay and the community so that they will be capable of securing their own areas.

Alcantara said that their mentoring and coaching with BADAC were also their way of teaching or “armoring” individuals on how they could keep their barangays a self-policing and drug-resistant one.

Their BDCP expands with their house visitation program where they talk with Persons Who Use Drugs (PWUDs) together with barangay officials to encourage them to take drug interventions offered by the PDEA-7 and the barangay and stop them from using drugs.

Cuayzon, for his part, said that when a drug den would be shut down, drug users’ safe haven would be taken from them.

He said these would make new drug users and pushers to be aware of this and to make them afraid of getting caught if they would engage in the illegal activity.

He said through this method, the PDEA-7 was slowly taking the market out of the hands of the drug personalities.

The earlier they intercept these new drug users and pushers, the higher the chance of changing them and preventing them from becoming markets of drug personalities.

Part of the intervention for those, surrendering drug offenders, is letting them go through the Balay Silangan.

Balay Silangan is a reformatory center that offers a temporary refuge for drug offenders and a second chance for them to fully change and become law-abiding citizens.

The groundwork of Balay Silangan started in 2018 and it provides general interventions such as health awareness, psychological, spiritual, and physical activities including counseling, moral recovery, values formation, that can help these offenders change for good.

However, the services of Balay Silangan follow specific conditions that surrendering drug personalities must meet.

One is they should not be included in the PDEA and police drug target, wanted, and watchlist or has pending criminal cases or previous convictions on drugs.

He also said drug den maintainers were not eligible for this because they were considered high-value targets in terms of illegal drugs.

Cuayzon said that the logic behind this would be to prevent small time drug pushers to become bigger ones in the future.

(If we only aim for anti-drug operations alone for these small time pushers, it is not be enough. Whether we arrest them or not, they will still become big time.)

(To avoid them becoming big-time, we try to change their perception of money. After that, we help them develop their skills. At least, when they go out the Balay Silangan, they will be professionals.)

Alcantara also said that they were already coordinating with different agencies should these individuals graduate from the reformatory facility, and then they would be offered jobs that could help them restart their lives.

For drug users, they will be encouraged to enroll in interventions offered in community-based rehab programs of their respective barangays where they will undergo an after-care program.

After drug offenders would be apprehended, they would undergo tactical interviews to identify the sources of their drugs.

Cuayzon said that most of them would say that they had communicated with an inmate from different jail facilities in the region who would help facilitate in getting them their illegal items.

He said this had become a popular trend nowadays.

Big-time drug personalities usually use inmates as their facilitators to prevent investigators from finding the source of the illegal drugs.

For operatives, it would be close to impossible to get further information from these big-time drug personalities given that they were already behind bars.

Also, big-time drug personalities would often choose a trusted man that could work on the ground for them.

In instances such as this, investigations on possible sources of drugs will be stopped in jail because the inmates would no longer disclose information leaving the investigation hanging.

However, Cuayzon said that the greyhound operations that they and the jail management had conducted had also helped them in finding leads, especially from the cellular phones that they had confiscated.

Whatever information, change of conversations, calls that they would be able to extract from these phones, Cuayzon said it would help them with their investigation and the continuous monitoring of the movement of the drug personalities in this illegal activity.

In today’s holistic approach in the campaign against illegal drugs, Cuayzon said that there had been a slight reduction in supply, harm and demand especially since they were targeting several areas to disrupt the flow of the illegal drugs business here.

He said if before drug personalities would only concern themsleves in selling their items discreetly, now they would also be facing difficulty in maintaining their markets since operatives would already be providing interventions to their possible markets.

Cuayzon said he was hopeful that the in the coming years, the country would be free of these drug menace if they would continue to succeed in implementing these interventions.