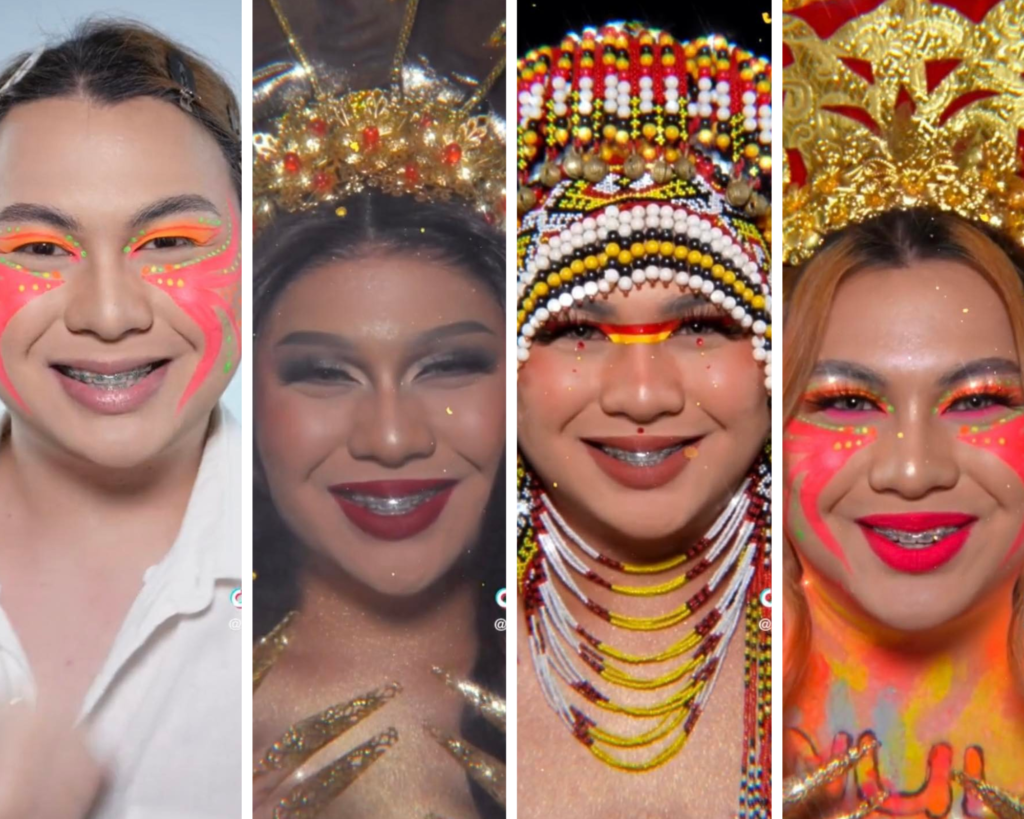 Hueben Kang, 22-year-old UP Cebu student, shows her creative side with her Sinulog makeup transformation in a 40 second video in TikTok where she transformed into a Sinulog Festival Queen and a Sinulog dancer. | screen grab Hueben Kang’s Tiktok video

CEBU CITY, Philippines — The Sinulog hype is not yet over.

Hueben Kang, a 22-year-old makeup artist from Surigao City and a student of the University of the Philippines Cebu, continued to make a mark when she posted her Sinulog makeup transformation on TikTok on Jan. 18, 2023.

Kang is known for making herself a canvass of her makeup transformation with various themes, and among her trademarks is her festival look transformation.

In a 40-second video, Kang featured three transformations: a ‘Sinulog Festival Queen’ look and two versions of a ‘festival dancer’ look. As of writing, the video garnered over 900,000 views on the social media app.

Kang told CDN that she was happy and grateful that the netizens appreciated what she made.

She said that she would often receive comments like ‘I miss Sinulog,’ ‘Sana makabalik na ako ng Cebu’ (I hope I can go back to Cebu), ‘Sana maka experience ako ng Sinulog’ (I hope I can experience the Sinulog), driving her to continue doing transformations like this in the future.

“It’s that thought that fuels you na ‘Hala, what’s more to that?’ Di ba murag like it’s letting the people experience what they can’t. At least man lamang in the sense nga naa sa TikTok,” Kang said.

(It’s that thought that fuels you that ‘Oh, what’s more to that?’ Is it not like it’s letting the people experience what they can’t. At least, in a sense it is is TikTok.)

Kang said that a comment that left a mark on her was a netizen saying, ‘Grabe yung video na ‘to. It’s like na experience ko na rin yung Sinulog’ (This video is great. It’s like I also experienced the Sinulog.)

(It was very heartwarming in a sense that even if the person was not in Cebu. The person experienced it [the Sinulog] through my video.) 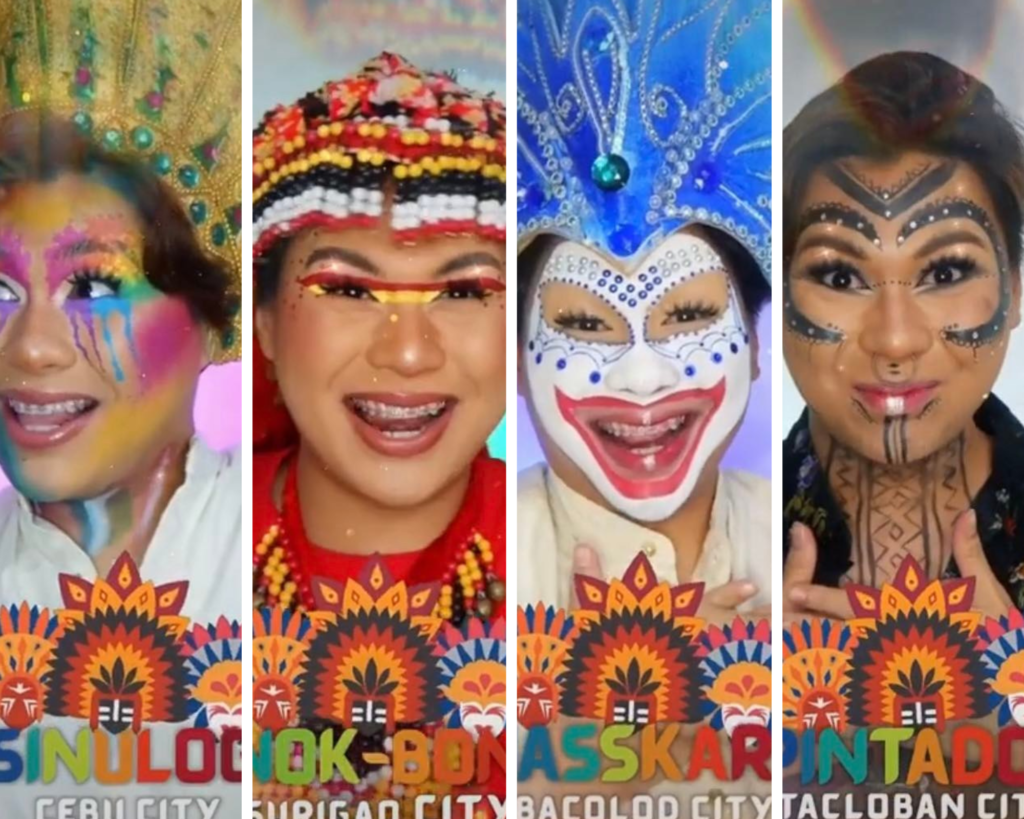 Hueben Kang, 22-year-old UP Cebu student, says she started to be recognized for her makeup transformation videos when her “Choose Philippines” video was featured in CDN Digital in 2020. | screen grab from Hueben Kang’s Tiktok video

It was 2020, during the peak of the pandemic, when Kang started doing makeup transformation featuring Philippine festivals like Sinulog, MassKara, Ati-Atihan, Pintados, Panagbenga, and Bonok-Bonok.

Subsequently, it was also in 2020 that her growth as a content creator boomed after CDN featured her Choose Philippines-themed transformation.

(Actually, CDN was the first to recognize me, and it was also in CDN that my ‘Choose Philippines’ video went viral.)

She said that after CDN featured her story, local and national media outlets contacted her for interviews, and eventually she got recognized by Former Tourism Secretary Bernadette Romulo-Puyat, for promoting the tourism industry amidst the pandemic.

“Hala oy, magstep up pod ta’ so mao to nagtry ko outside of the box kay ang purpose man gud why I started doing makeup was I was very insecure sa face nako kay I had a lot of acne so I really wanted to cover that,” said Kang.

(I stepped up so I tried something out of the box because my purpose why I started doing makeup was I was very insecure of my face because I had a lot of acne so I really wanted to cover that.)

(So, it evolved into something creative and then now, it is really super creative even if sometimes I am challenged.) 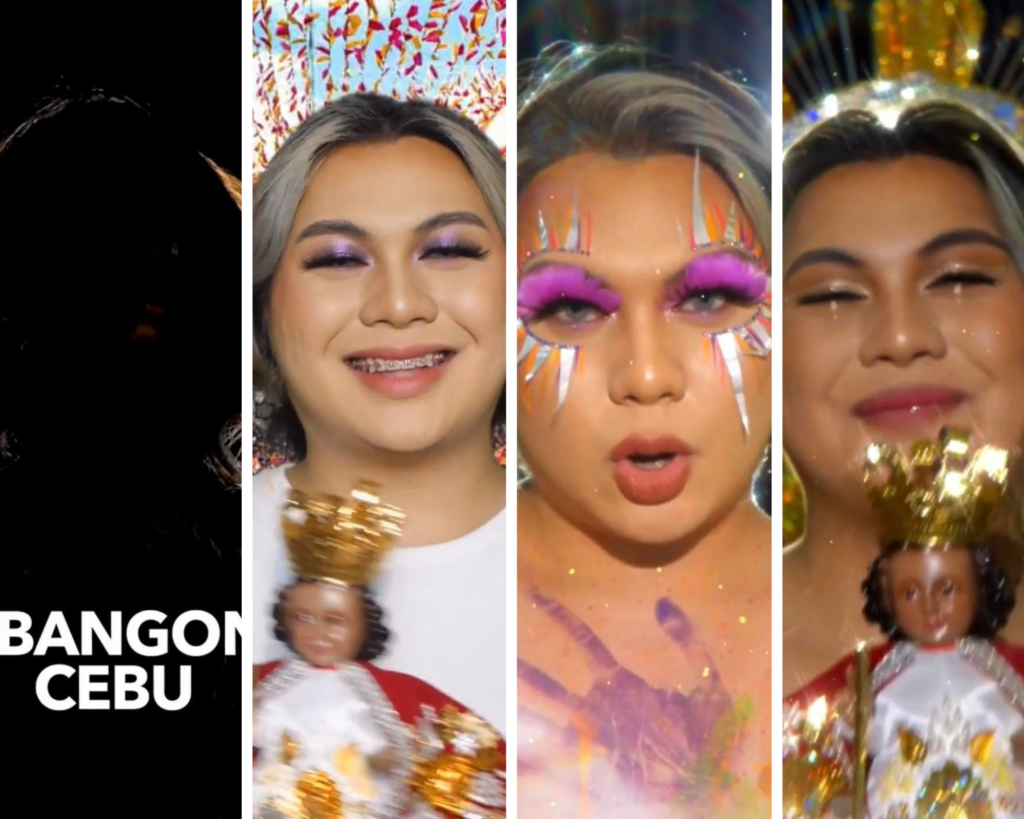 Hueben Kang, 22-year-old UP Cebu student, also did a makeup transformation video called “Bangon Cebu” as a tribute to Cebuanos to rise from the devastation of typhoon Odette in 2021. | screen grab from Hueben Kang’s Tiktok video

The Cebu-based student also created a Sinulog makeup transformation in January 2022 but with less highlights on the costumes since it served as her ‘Bangon Cebu’ tribute, after the onslaught of Typhoon Odette in December 2021.

Consequently, she curated ideas last December 2022 for her January 2023 entry. When she finalized the concept, she thought of focusing Sinulog as a melting pot of culture.

Kang said that she was looking forward to creating another Sinulog makeup transformation next year after some netizens told her to make it a yearly thing.

(This is very rewarding in my part for every effort, every sleepless night. Even if this is done yearly, it is really rewarding, and it has been branded in their brain that this is me. The Sinulog is by Hueben Kang.)

With the success of her production, Kang extends her gratefulness to Harold Antallan, the person behind her festive costumes.

“Thank you very much kay you were the instrument jud nga mahuman ni nga video. If it weren’t for the headdresses nga iyang ge lend sa akoa, the video wouldn’t be that successful,” said Kang.

(Thank you very much because you were the instrument that I finished the video. If it weren’t for the headdresses that he lent me, the video wouldn’t be successful.)

She said that if it weren’t for the headdresses, the Sinulog video will not be given justice.